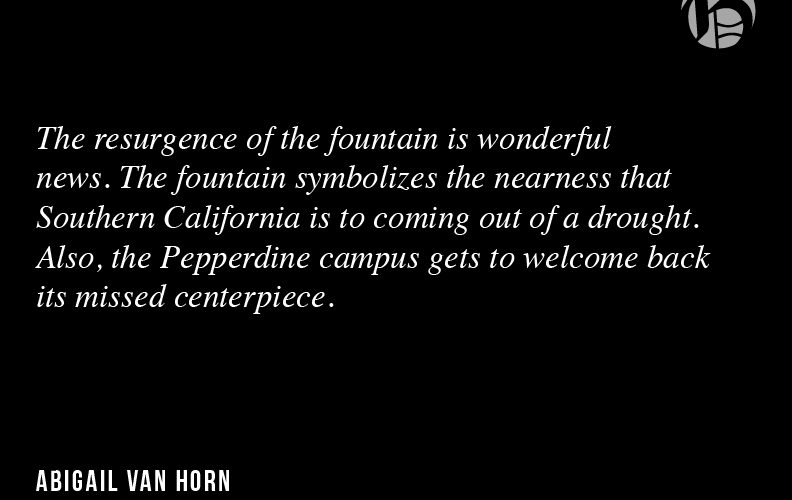 Like Lazarus, the fountain has been resurrected from the grave.

For those who hadn’t noticed, the main fountain residing center stage of Pepperdine’s own Joslyn Plaza has been turned back on, and it is phenomenal. While water has not been restored to all fountains on campus, the return of the main fountain is a physical depiction of Southern California coming out of the drought.

The seniors will remember that the fountain’s reign died with a lack of rain circa 2014 when Shiah LeBouf decided to stop being famous.

“In 2014 the University shut down all 12 of its on-campus recirculating water features and fountains. Since that time we have received repeated requests to turn the fountains back on, particularly those located in Joslyn Plaza and Heroes Garden,” according to Pepperdine’s community water page. These mentioned requests include, but are not limited to, a recent petition by student Andrew Lozano who gained the support of 198 students.

Pepperdine, of course, shut down the fountains in the first place as a proactive response to drought in the area. “At Pepperdine, our water conservation efforts have never been viewed as a short-term drought response, but as we recognize the need to implement additional measures to adapt to a new normal in California we are assessing which of the measures undertaken in response to the drought we will retain long-term,” states the same web page.

While rumors circulating on campus have claimed that Southern California is out of a drought, this is not true. The severity of the drought has lessened dramatically and may be resolved within the next few months.

The fountain was brought back on due to recent weather in the Southern California area. Unlike Marlon Brando of “The Godfather,” SoCal weather has been breaking character by raining considerably more than normal. “The latest National Weather Service Climate Prediction Center seasonal drought outlook, valid for February 16 – May 31, 2017, shows drought in southern California likely to resolve” according to “Is the drought over?” published by the California Water Science Center on Feb. 10, 2017.

The resurgence of the fountain is wonderful news. The fountain symbolizes the nearness that Southern California is to coming out of a drought. Also, the Pepperdine campus gets to welcome back its missed centerpiece. 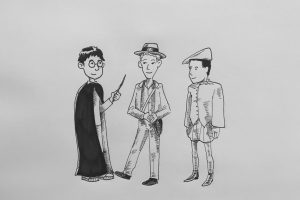 Art by Peau PorotesanoInstead of appreciating the various points of view when it comes to art, people tend to judge a person's...
Copyright 2013 Jupiter Premium Magazine Theme
Back to top