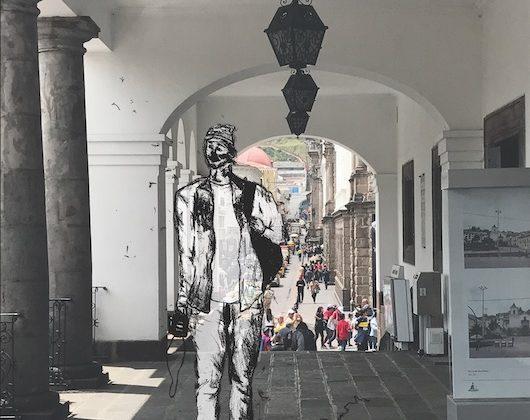 Photo and art by Whitney Powell | Powell illustrated first-year Sports Medicine major Everett Baker’s hope to go abroad by drawing him in Quito, the capital of Ecuador. Baker plans to study in Buenos Aires next year.

Hope. A term people use lightly but feel deeply.

Moments of hope can be significant, life-changing events or even just simple smiles from strangers. Pepperdine students said they define hope with words like optimism, faith, joy and aspiration.

“When I think of hope, I always think of my faith,” said Parker Waters, senior Psychology major and a nondenominational Christian. “Our hope in Jesus — that’s always kind of where I’ve put my hope and found the most secure hope.”

Hope is something that can shape one’s outlook on life. Some people are just naturally referred to as “hopeful” or “optimistic” people, Sociology Professor Charles Hall said.

Hope can be thought of intellectually, but if it is not something that is felt as an emotion, it will not make as big an impact on your life, Hall said.

“You have to feel hope,” Hall said. “You have to really be hopeful, and it’s been hard to do that.”

When external, out-of-control circumstances are happening around an individual, Hall said it is important to look for hope in the chaos. For example, the Russia-Ukraine war doesn’t seem to inspire any hope. But, amid that conflict, he has heard hopeful stories of Ukrainian people bonding more than ever before.

“Sometimes we’re in the middle of a crisis like that, or even if it’s a personal crisis, and the only thing we have is hope,” Hall said.

Madi Billingsley, first-year International Studies major and a member of the Church of Christ, said she experienced the most life-changing moments of hope in her life when she served Syrian refugees. She saw women who had lost their homes alongside their friends and family members, but they still had hope.

“I saw people give their lives to Jesus and had more joy and life with the most tragic circumstances than anyone I knew back home,” Billingsley said.

Some students referred to hope as something that keeps them optimistic or “looking forward” through any circumstance. For Billingsley, hope gives her life and the ability to push forward past any moment.

“Hope is belief in a greater good often while in the midst of pain or suffering,” Billingsley said.

Waters thinks of hope as more of an orientation to root and ground herself in, rather than belief in a preferred outcome. When she puts her hope into circumstances, grades or relationships, Waters said she is often let down, but when she puts her hope in her faith, she knows she has a solid foundation to lean on in the good and the bad.

“I’ve tried to put my hope in things of the world, but it just kind of failed,” Waters said. “I feel like Jesus — when I think of the word hope — is where my brain goes.”

When he was younger, Hall said he too would put his hope into grades — something he sees his students doing now. But Hall learned to not put his hope in things that won’t matter as much in the future.

Everett Baker, first-year Sports Medicine major and nondenominational Christian, said he can place his hope in specific moments he looks forward to.

“Any new experience for me is something that brings me hope,” Baker said.

Baker said he often hopes to accomplish an achievement, meet a new friend or travel to a new destination.

“Studying abroad is something that’s brought me a lot of hope because it’s going to bring a bunch of new experiences,” Baker said. “I’m going to get to explore so much, and it’ll be something that I haven’t done much of.”

Rebekah Coles, first-year Political Science major and nondenominational Christian, said she finds hope when plans work out — especially plans she is nervous about. Coles applied to be a spiritual life advisor for the upcoming academic year and felt hopeful about her chances.

“I felt more confident in my application that hope grew in me,” Coles said. “I ended up getting the position, and it was such a moment of pure joy.”

The downside of hope

When reflecting on his life thus far, Baker said he found moments of hope in looking forward to getting his driver’s license or going to college. While these events were exciting, Baker tries to not put too much hope into those upcoming circumstances because he doesn’t know when they will get canceled or taken away.

Baker said he doesn’t always think the worst is going to happen, but he doesn’t get his hopes up for particular moments.

“I just find when my expectations are set at that low bar, then I’m happily surprised every time, and it lets me be in a more joyful mood,” Baker said.

Waters said the same thing — she used to put her hope in upcoming circumstances, but after COVID-19 canceled those plans, she decided to stop putting her hope in events.

“I found a lot of my hope in my work — like in school and being here [at Pepperdine],” Waters said. “But I feel like spending a year away from campus taught me the most I could have ever learned.”

Waters said she is learning to get excited about upcoming moments again — namely traveling abroad — without putting her hope in these moments.

While Baker said it was OK to be cautious with hopeful thinking, he said he also pushes himself to be optimistic about upcoming moments.

“I think it definitely can be misconstrued because so many people feel like hope is a bad thing,” Baker said. “It can bring disappointment if you put hope in something that doesn’t follow through, so I think that definitely gives people a bad view of hope and makes it so that they’re less likely to put hope in anything.”

Coles, like many students, said she views hope as part of her Christian faith.

“Hope means trusting in my desires that the Lord will provide the outcome that is the best for me,” Coles said.

When something doesn’t go the way she planned, Cole said she trusts in the hope that God has a better plan for her.

“It is important to remember that having hope in wanting an outcome is not a guarantee,” Coles said. “It just gets us excited to see what will happen. So being able to find pure joy — regardless of where your hope leads — is definitely something I recommend.”

While circumstances can be upsetting, disappointing or feel like they are life-changing, hope can be a concept that keeps individuals optimistic and looking forward to what is to come. Billingsley said when she stays rooted in her hope, she can believe everything else will work out.

“Hope isn’t just a feeling of wishing things would change,” Billingsley said. “My hope comes directly from the personhood of Jesus and the fact that his promises are never empty words.”

Baker said he will continue to look forward to the little moments of hope in his life — all while keeping his hope grounded in his faith.

“We have so many things to put hope in,” Baker said. “If you put hope in something, it can bring great benefits.”