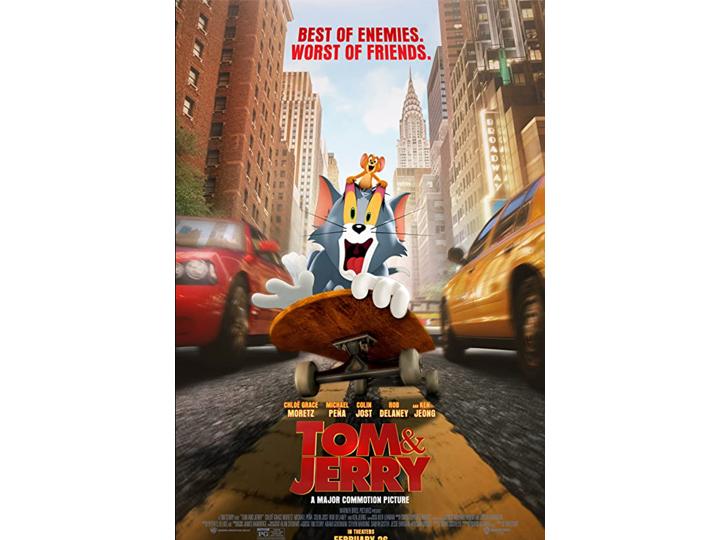 The official poster for “Tom & Jerry” (2021) shows the titular characters riding on a skateboard through the streets of New York City. While this poster gives the impression the film will be focused on shenanigans like the one depicted, in reality the movie spends a very limited amount of time on scenes like this.

“Tom & Jerry” (2021), directed by Tim Story, is a film adaptation of the classic cartoon of the same name. In this modern reboot of the beloved show, Jerry, a mouse, takes up residence in a New York City hotel just before the wedding of two celebrities is set to take place on the property. The hotel’s new events manager has to find a way to get rid of the mouse so the wedding is not ruined, and hires Tom, a cat, to hunt down Jerry.

In this version of the cartoon “Tom & Jerry,” the story takes place in the real world, in traditional, live-action style, while the titular characters are animated.

This film is one of many reboots in recent years, and like many before it, it fails to capture what made the original cartoon it’s based on so beloved by its audience. The focus on human characters, lack of actual action between Tom and Jerry and its bland tone and style make the film an unfaithful and extremely unfunny reiteration of an iconic story.

William Hanna and Joseph Barbera created the cartoon series “Tom & Jerry” in 1940. A typical episode of the show follows Tom as he tries to capture Jerry, while Jerry continuously foils his attempts in outrageous and imaginative ways. The show is consistently focused on its cast of animal characters, and usually shows humans only from the neck down to maintain the animal perspective.

In “Tom & Jerry” (2021), a majority of the movie is spent focusing on human characters, particularly the Royal Gate hotel’s new events manager, Kayla, played by Chloë Grace Moretz, who is in charge of making sure the wedding goes smoothly, and her superior, Terence, played by Michael Peña. The couple getting married, Ben and Preeta, played by Colin Jost and Pallavi Sharda, respectively, also get a lot of screen time.


By spending so much of the film’s 101 minute runtime following these people and their stories, Tom and Jerry’s shenanigans are almost secondary to what’s happening in the lives of the humans in the story.

A hallmark of the dynamic between Tom and Jerry is their extended action sequences, where their comedic physical attacks on each other grow increasingly outlandish and unreal. Due to the time spent dealing with human problems in this movie, there are only a handful of scenes like that in a film that is supposed to be focused on those two characters.

Aside from the problem the film has with its focus, the human characters it spends most of its time on are not interesting enough to warrant that spotlight. Tom and Jerry are characters most American audiences are already familiar with, so people are already invested in them.

The new characters introduced in the movie have to be made interesting to the audience so they can become invested in them and care about them, but that doesn’t ever happen; most of the people in this movie are very flat and lackluster, as they are never given characteristics beyond one or two defining traits that are tied either to their job or their role in the wedding.

Even the main human character, Kayla, is defined by her need for a job that leads her to start working at the hotel, with few other noticeable personality traits beyond that.

“Tom & Jerry” is supposed to be a comedy, but the laughs are nearly nonexistent. The lack of classic action sequences between the cat and the mouse accounts for much of this, as does the failed attempts at verbal and slapstick comedy by the actors in the film.

The only human character who consistently lands their comedy is Chef Jackie, played by Ken Jeong, a comedic actor and veteran of the genre. The other typically comedic actor in the movie, Jost, delivers a one-dimensional and unfunny performance, which is odd considering his usual job as a head writer and weekly performer on Saturday Night Live.

The lack of comedy and focus away from the main characters of “Tom & Jerry” make the film a clearly unfaithful reboot of a timelessly funny cartoon, as does its animation style.

The movie employs a 3D animation style for its animal characters, as opposed to the traditional, 2D style used in the old cartoon. This further separates it from its source material, and not in any kind of interesting or innovative way.

If the film had stuck to the traditional animation style and presented these classic characters as people are used to seeing them, they might have been able to more effectively endear this story to audiences.

While there are more negative than positive things happening in “Tom & Jerry,” there are still small moments when the spirit of the original cartoon finds its way into the movie.

Scenes like Jerry leaving the hotel through his own mouse-sized revolving door, or Tom opening his chest up to show his DNA, revealing a cat and mouse chasing each other around the double helix feel like the classic cartoon. These moments, however, are few and far between, and don’t do enough to save the film from ultimately being unfaithful to the source material and unfunny in general.