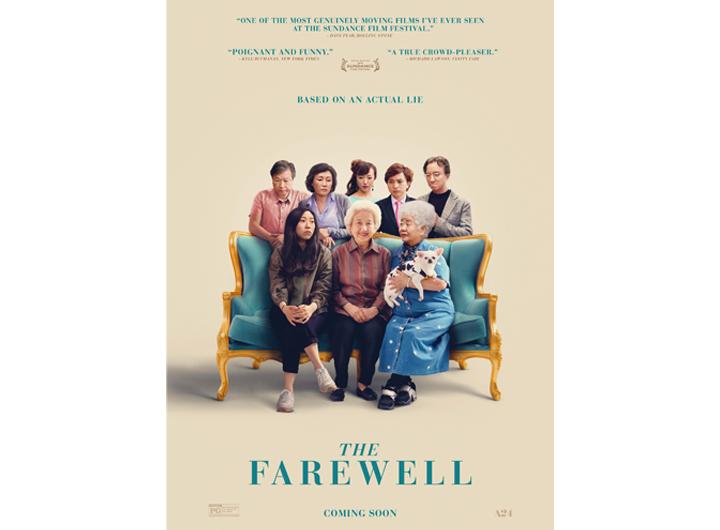 The official movie poster for “The Farewell” displays members of the Wang family. For the first time in over 25 years, the entire family gathered for a reunion in China. Photo courtesy of A24

“The Farewell” is a bittersweet movie about keeping the family matriarch’s illness a secret. This film intimately portrays the Chinese American experience, proving to be one of the most authentic Asian American films.

In 2016, on the podcast “This American Life,” Director Lulu Wang told her story about being forbidden to speak about her own grandmother’s terminal illness. Later on, producer Chris Weitz’s interest in Wang’s story and his promise to keep it authentic rather than whitewashed enabled her to create this film. It premiered at the 2019 Sundance Film Festival and was later released in theaters July 21, 2019.

Asian films are gradually establishing a greater presence in Hollywood. Some of the recent blockbuster Chinese films include “Crazy Rich Asians” (2018), “Go Back to China” (2019) and “Mulan” (2020). In contrast to these drama films, “The Farewell” explores the ordinary life of a Chinese American, making it one of a kind.

In the film, Chinese-born American Billi Wang (Awkwafina) learns that Nai Nai, or grandmother, has been diagnosed with lung cancer.

What shocks Billi even more is that she is forbidden to tell Nai Nai (Shuzhen Zhao). As Billi’s mother (Lu Jian) explains, there is a holistic approach to death in Chinese culture. The whole family must take on the burden of the possibility of death.

The entire family stays silent about it, and on top of that, they decided to throw a fake wedding for Billi’s cousin (Hao Hao) as an excuse to see Nai Nai one last time.

“The Farewell” does an exceptional job of demonstrating the struggle of having a Chinese and American identity. It carefully examines the feeling of being a part of two worlds but feeling excluded at the same time.

When Billi arrives in China, she is bombarded with questions about her life in America. Throughout her stay in Changchun, she constantly apologizes for her poor Mandarin. In regard to Nai Nai’s declining health, while Billi is responsible for keeping her Chinese death customs, the American side of her believes it’s necessary to tell her grandmother the truth.

But it’s not just Billi who is disconnected from her Chinese culture; it’s her parents, too. It’s been almost over 25 years since Billi’s mother (Diana Lin) and father (Tzi Ma) have returned to China. Despite growing up there, they are also not completely in touch with modern China.

In addition to Billi’s and her parent’s struggle with their cultural identity, the film shows the clashes in perspectives regarding the cultural differences of the East and West.

The family members frequently discuss the differences between America and China. They constantly debate which country is better. Despite all of this, the film is able to portray that the two cultures are different and should not be compared.

Above all, “The Farewell” shares one of the many perspectives of what it means to be Chinese American. Some viewers of different cultural backgrounds may feel disconnected from the subtle references to Chinese culture. The film, however, is able to establish a greater connection with the audience through themes such as family and the death of a loved one.

Through “The Farewell,” Wang shares her story about her struggle with facing her dying grandmother due to her conflicting cultural morals. Full of emotional realism, “The Farewell” allows viewers to completely immerse themselves into a heartwarming story about culture and family.

Ever since COVID-19 hit, people are spending more time with their families because of stay-at-home orders. However, those considered vulnerable to the virus or those unable to visit family members in other countries due to travel restrictions can only connect virtually. “The Farewell” illustrates that long-distance family bonds will remain strong no matter what.

As diversity in Hollywood continues to grow, it is worth anticipating the stories Asian creators and producers have to tell in the future.

“The Farewell” is now available for streaming on Amazon, YouTube, Google Play and Vudu in both Mandarin and English, with English subtitles.