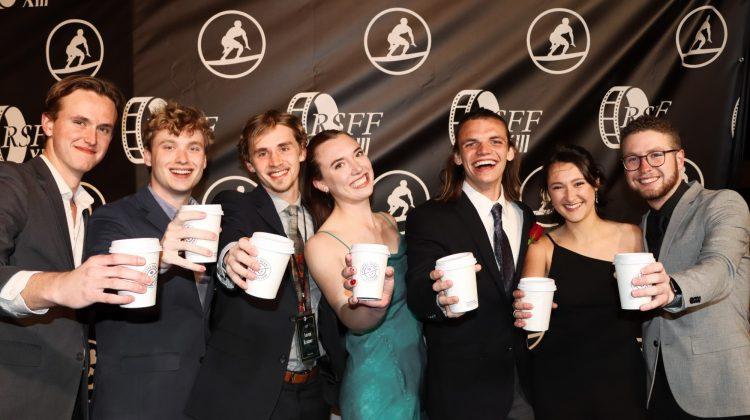 Members of the cast and crew of “Coffee” smile on the ReelStories red carpet with their own cups of coffee. Director Jadyn Gaertner said she and her cast and crew put the short film together in only a week. Photos by Sammie Wuensche

ReelStories marked its thirteenth year at Pepperdine on Feb. 4. The film festival gives student filmmakers the chance to screen a short film for the Pepperdine community, and this year seven films premiered at the on-campus event.

Each of the films screened at ReelStories this year shared unique student perspectives, with some telling moving personal stories and others creating interesting fictional narratives. “Nai Nai,” “Mushroom Pizza,” and “Finding Empathy: A Glimpse Into the Life of a Paralyzed Surfer,” were the standouts of the night, but each of the short films were impressively made and entertaining.

“Nai Nai” tells the story of a Chinese-American man visiting his grandmother in Los Angeles’ Chinatown. While he’s there, they reconnect, and in an emotional climax, the man’s grandmother explains how she has never forgiven his mother for taking him out of Chinatown, away from her and his father. At the end of the film, some time has passed and the grandmother has died, and the man reflects on their bond and what she meant to him.

This film was visually stunning, with many beautiful shots of Chinatown that established the film’s setting in a powerful way. The actor who played the titular grandmother in “Nai Nai,” Ping Liu, delivered a very emotional performance that really sold the film’s story and gave it a lot of its power. Under the direction of junior Gabbatha Hall, “Nai Nai” took home the award for Best Picture.

The best comedy of the evening was Haleigh Bolduc’s “Mushroom Pizza,” a film about a woman meeting a man from a dating app for a picnic in the park, all narrated by a nearby snail. The couple sits together eating their pizza as the snail discusses things concerning his personal life, before his monologue is abruptly interrupted by the sound of a loud crunch, as the woman accidentally eats the snail.

This simple, lighthearted film was a breath of fresh air, as many of the other films dealt with more serious or emotional topics. It was funny and unique, with a surprise ending that delighted the audience. While it didn’t have a deep or profound message, it was very entertaining and fun to watch.

One of two documentaries of the night, “Finding Empathy: A Glimpse Into the Life of a Paralyzed Surfer,” considered the role of empathy in today’s society by looking at the work of Life Rolls On, an organization that gives people with disabilities the opportunity to surf and skateboard. The film focused on their efforts with surfing, and showed how they’ve changed the lives of both participants of the program and volunteers, inspiring them and showing there is still powerful empathy in the world.

“Finding Empathy: A Glimpse Into the Life of a Paralyzed Surfer” was moving, and its subject matter was inspirational. The footage of people surfing with the help of volunteers was powerful, as well as the interviews included in the documentary, particularly those with Jesse Billauer, the founder of Life Rolls On.

The film aimed to explore empathy and its presence in the world today, and by focusing on this specific foundation and its work, directors junior Dane Bruhahn and sophomore Christina Buravtsova, GNews executive producer for the Graphic, accomplished this.

The other four films shown at ReelStories were “Last Call on Sunset,” “Blanca,” “Honey” and “Coffee.”

“Last Call on Sunset” is an ambitious film noir about a detective and his brother, who he has to arrest, going out one last time together. Director Kelly Needleman, a sophomore, shot the film in black and white, reminiscent of classic film noirs, and it is very aesthetically interesting because of it.

“Blanca” also reflects on old Hollywood, as the subject of the film is a woman watching “Casablanca” who sees someone appearing to be the film’s star wandering around and decides to follow him. Senior Isabella Hamm directed the film on Pepperdine’s campus, which made its setting fun and engaging for the audience at the festival.

The second documentary of the festival, “Honey,” is a look at the long life and impact of first-year director Hali Orefice’s great-grandfather Victor, known as Honey by his family. Honey’s connection with his family and the love they have for each other was very evident in the documentary, and it was clearly made with a lot of care, which showed in the final moving, charming product.

The final film screened at ReelStories was junior Jadyn Gaertner’s “Coffee,” a story about a man who wrestles with his own identity as he tries to be successful. “Coffee” had a relatable message about identity and trying to be the best version of yourself, as well as visually interesting filmmaking, with one actor playing multiple parts and some characters being played by multiple actors.

ReelStories’ film selections showcased the filmmaking talent in the Pepperdine community, and were each entertaining and valuable. While “Nai Nai,” “Finding Empathy: A Glimpse Into the Life of a Paralyzed Surfer” and “Mushroom Pizza” were the best films of the night, all seven short films are huge accomplishments of student filmmakers.