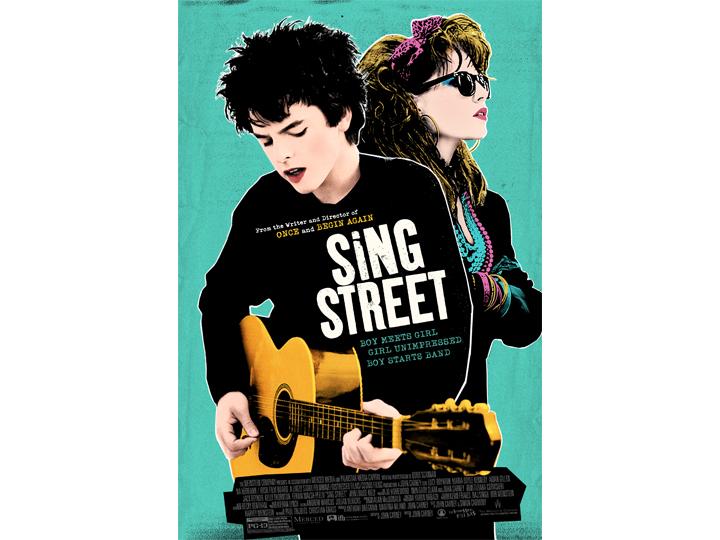 Laying in the grass strumming the guitar, choreographed dance in high school gyms and sailing away through the Irish Sea, these are all at the heart of “Sing Street.” This film brought to life the fantasy of musicianship, brotherhood and true love.

The Irish indie film “Sing Street,” directed by John Carney and released in April 2016, tells the heart-warming story of a teenage boy, Conor Lawlor, (Ferdia Walsh-Peelo) in 1980s Dublin, Ireland. Lawlor navigates starting a new school infested with new bullies and girls, but he most importantly realizes his love for music.

John Carney directed the film “Begin Again,” and award-winning musical “Once,” both of which reveal to audiences how the love of music can unleash the most mysterious and enchanting characters, similar to “Sing Street.”

“Sing Street” perfectly mixes humor, music and emotion to tell a beautiful story about the wonder of falling in love and pursuing one’s dream.

When Lawlor begins at a new school, he sees a girl named Raphina (Lucy Boynton) across the street. As he introduces himself, he lies about being in a band to impress her. The band is called “Sing Street” after his school, “Synge Street.”

When Lawlor forms his band, he meets his friends Darren (Ben Carolan) who becomes their “manager,” Eamon (Mark McKenna) who can play every instrument known to man, and Gary (Karl Rice) and Larry (Conor Hamilton), who play bass and drums, respectively.

Eamon and Lawlor write songs, such as “Up” and “A Beautiful Sea,” which are written about Lawlor’s love for Raphina and featured on the film’s musically diverse soundtrack.

The soundtrack includes bands such as Duran Duran, The Cure, Joe Jackson, The Jam and more. All bands inspire the growth of the fictional band “Sing Street.”

The movie beautifully romanticizes the impulse of following one’s dream. The boys realize how serious they want to pursue music and Conor and Raphina run off into the night to sail to London on a whim — he has his demos and she has her modeling shots.

One of the repeated themes throughout the movie, which is initially said by Raphina, is that love is “happy sad.” This means everyone will go through many different emotions throughout life and when people begin to understand and nurture them, they can truly be a happy person. This is what Lawlor thinks his music should be — knowing one’s pain and embracing it. He turns his bully into his “roadie,” encouraging his older brother and never taking fear seriously, — even though the future is completely unknown.

The movie provoked many musicians to remember what it means to begin in their music career and the hard work it required. This movie takes inspiration from how many famous bands got their start, such as U2.

Bono, the lead singer of U2, posted a statement on the band’s website saying, “My brother gave me the gift of music through my first guitar, we formed a band. In truth, at the same stage, U2 were not as good as the kids in ‘Sing Street.’ Most films you’ll see this year won’t touch ‘Sing Street.'”

The cast of “Sing Street” recorded the soundtrack themselves and even performed live after the movie’s release, such as performing in the London Underground to promote the film.

Once Lawlor and Raphina sail off, the movie ends inconclusively, thus illuminating the wonder of the film. Lawlor could have sold his demos to become part of the biggest band in the world with Raphina on every billboard. Or, they could have broken up to pursue something opposite. It is up to the viewer to decide the ending — that is the beauty of the fairytale that is this film.

Through the love of Lawlor and Raphina and the pure happiness of friends creating music, “Sing Street” is one of the best movies of our generation.

This coming of age story is a love letter to the music that defined the 1980s and shows that some of the greatest bands started with nothing but a dream and a guitar.

“Sing Street” is available to stream on Amazon Prime Video.