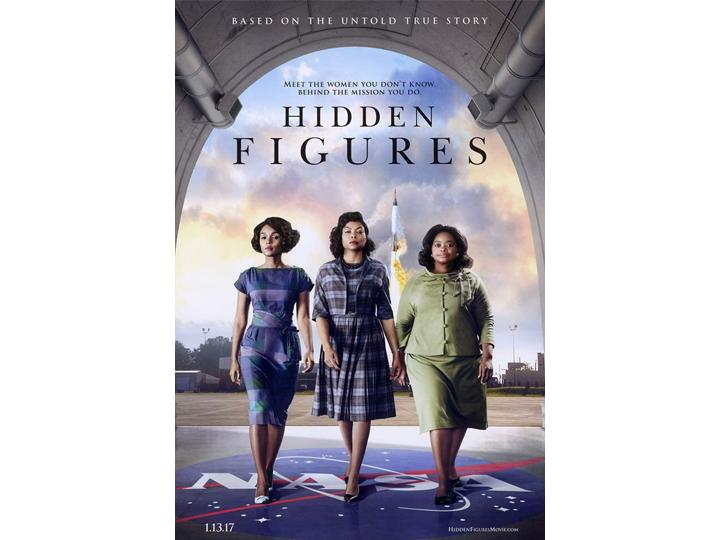 “Hidden Figures” (2017) tells the true story of three brilliant Black female mathematicians — Katherine Johnson (Taraji P. Henson), Dorothy Vaughan (Octavia Spencer) and Mary Jackson (Janelle Monáe) — who use their intellect to supersede both segregation and sexism at NASA and propel the United States in the Space Race that dominated the 1960s. “Hidden Figures” is a telling and motivating movie for anyone to watch in honor of Black History Month.

While “Hidden Figures” introduces many important themes regarding racial injustice and gender inequality, it is apparent that Melfi’s goal was to tell a heartwarming story rather than a historically accurate one. Due to the creative liberties Melfi takes with the plot of “Hidden Figures,” it is hard to establish what Johnson’s actual experience at NASA was like versus what Melfi thought would make for an inspiring film.

“Hidden Figures” highlights the story of Katherine Johnson, a girl from West Virginia whose teachers identify as a genius from an early age. After graduating from West Virginia State College at 18, Johnson becomes one of the first three Black students selected to study math in a graduate program at West Virginia University.

Johnson goes on to work at the Langley Research Center for the National Advisory Committee for Aeronautics, which later became NASA, in Virginia in their West Area Computing Unit, an all-women segregated group who, as human computers, complete intricate mathematical calculations by hand. Here, Johnson works alongside Vaughan and Jackson. While all three women aspire to achieve higher-level positions within NACA, the barrier of racism prohibits them from being promoted.

After recognizing Johnson’s immense talent for analytic geometry, her white supervisor, Mitchell, promotes her to join Al Harrison’s Space Task Group. The group is under immense pressure from the US government to put a man in space.

As the first Black woman to join the Space Task Group, Johnson experiences abject racism and discrimination despite her critical contributions. In the film, her coworkers refuse to share the communal coffeemaker with her, and due to segregation, Johnson must walk over half a mile to use the closest restroom for women of color.

In real life, however, Johnson has been quoted as saying that during her time at NASA, she just used the “whites only” restroom anyway. Additionally, NASA was officially desegregated in 1958 (the film takes place in 1961). While Melfi may have included this part of the story to shed light on the reality of segregation in other areas of the country at the time, the addition of this story line strays from what Johnson actually experienced at NASA.

After successfully calculating the numbers needed to launch the astronaut John Glenn (Glen Powell) into space, Johnson is told she will no longer be needed in the Space Task Group. On the day of Glenn’s launch, the IBM computer makes an error only Johnson can solve; Harrison frantically calls her at the eleventh hour, and her last-minute calculations ensure that Glenn’s Friendship 7 mission launches and lands safely. While it is true that Johnson made hasty calculations to help the Friendship 7 get off the ground, in real life, Johnson was not actually invited into the control room to watch the launch like she did in the film.

The end of the film provides a glimpse into what the real Katherine Johnson, Dorothy Vaughan and Mary Jackson went on to accomplish. Johnson made vital calculations for the Apollo 11 and Space Shuttle missions, Vaughan continued to serve as NASA’s first Black supervisor and Jackson became NASA’s first Black woman engineer. In 2015, President Obama awarded Jackson the Presidential Medal of Freedom.

In terms of subject matter and casting choices, “Hidden Figures” is excellent. The film sheds light on issues the Black community faces that are especially relevant today, including workplace discrimination and the experience of having accomplishments diminished in favor of their white counterparts. Additionally, Henson’s performance is exceptional and punctuates the film with moments of believable conviction and emotion.

The score to this film is upbeat and lively, and it serves the plot well. By blending older tracks from Ray Charles, Miles Davis and The Miracles with fresh additions from Pharrell Williams, Mary J. Blige and Alicia Keys, the music provides timely emotional context to important scenes.

Despite its many successes, “Hidden Figures” still falls short. It feels like Melfi was so dedicated to the feel-good nature of the storyline that some important struggles the main characters faces are quickly introduced and then readily glossed over, which doesn’t allow the audience to fully absorb the gravity of the racism and sexism that women like Johnson, Vaughan and Jackson experienced. A throwaway scene at the beginning of the film alluding to police brutality encapsulates this sentiment.

In some instances, Harrison’s character alludes to a white savior complex. After Harrison confronts Johnson about her long bathroom breaks, she reveals to him the reason she takes so long is because of the distance she has to travel to the women of color’s restroom. This leads Harrison to literally smash down the ‘Colored Ladies Room’ sign in the film, declaring “Here at NASA, we all pee the same color.” However, this scene — along with the scene where Harrison allows Johnson into the control room to watch the Friendship 7 launch — never actually happened in real life. In fact, Al Harrison is not even a real character.

Interestingly, Harrison’s character both diminishes and conflates Katherine Johnson’s experiences as a member of the Space Task Group. Melfi’s attempt to present such a clear-cut narrative, in which the white man creates a racist environment and then alleviates it, takes away from the complicated real-life experiences of Black women at NASA.

While “Hidden Figures” makes meaningful strides by telling an important and historically overlooked story, adhering with increased diligence to the experiences of the women who lived them would’ve made for a better, more well-rounded film.