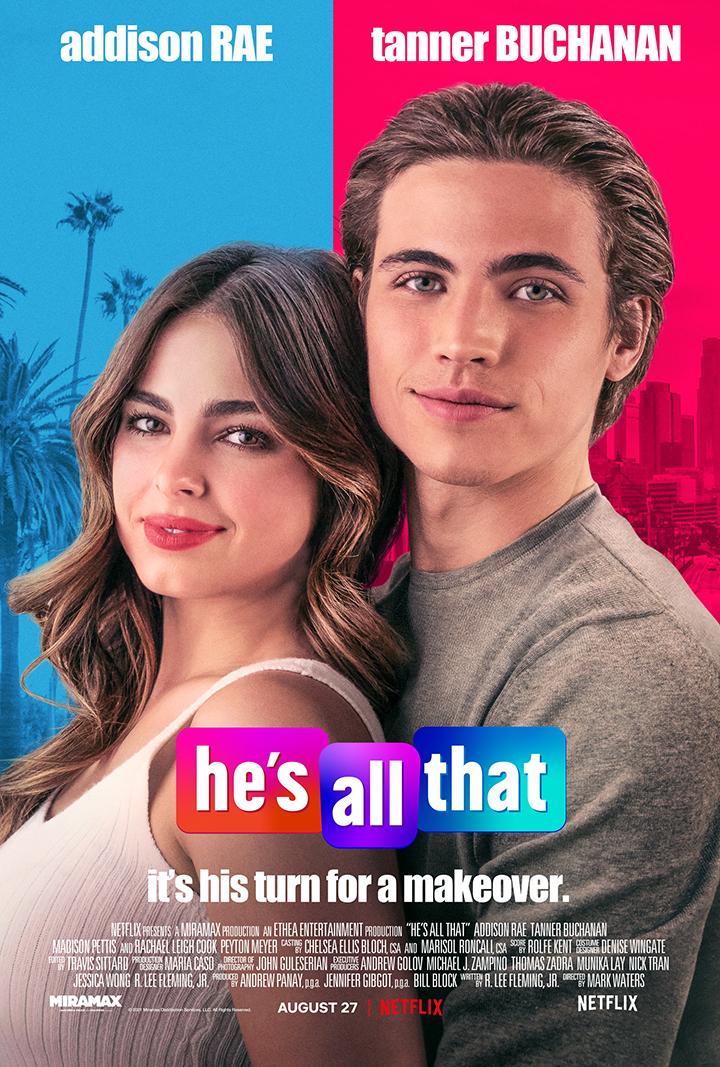 The official poster for “He’s All That” shows Addison Rae and Tanner Buchanan posing behind the title of the film. The poster itself is a reference to its source material, as the font of the title mimics that of the “She’s All That” poster. Image courtesy of Netflix

Released in 1999, “She’s All That” is a classic teen rom-com that remains popular today. The film is so beloved, it inspired a remake 22 years later — the 2021 film “He’s All That,” starring TikTok superstar Addison Rae.

“He’s All That” premiered Aug. 25, on Netflix, and is nowhere near as well made or entertaining as “She’s All That,” with both lackluster performances and production. An overload of product placement, an untrained lead actor and a clear disconnect between filmmakers and audience make “He’s All That” an objectively poorly made movie.

This film basically tells the same story as “She’s All That,” with a few crucial changes. The biggest switch is the gender of the main characters, with the popular kid being a girl and the loser who gets a makeover being a boy. Rae plays the film’s female lead, Padgett Sawyer, while Tanner Buchanan plays her counterpart, Cameron Kweller. The other important difference between the two stories is Padgett is a social media star and her brand deals play a major role in the storyline.

Rae has 84.7 million followers on TikTok, and brings exposure to any project she works on. If a movie wants buzz — positive or negative — then casting her is a surefire way to get it. Many people watched this movie to see her acting debut, creating pressure for her to deliver, which she didn’t completely fail at.

For about the first half of the movie, Rae delivers a passable performance as Padgett — and only starts doing a bad job when attempting to express deeper emotion.

There is a scene in which Cameron tells Padgett about his mother’s death in a tragic plane crash, and Rae can’t seem to make herself appear genuinely affected by this story at all. This inability to express anything beyond being happy or content as an actor can be attributed to her lack of formal training rather than her lack of ability overall.

While watching “He’s All That,” it is impossible to miss the frequent product placements in the film. The most egregious example is a scene in which a character asks if she can “get some KFC to go,” and then immediately eats a bucket of chicken that is literally in the middle of the shot. Padgett is an influencer who promotes beauty products on her TikTok live streams, and Rae’s association with the app makes it a no-brainer brand deal for the movie, but other featured companies like Doritos or Old Navy are out of place and off-putting for viewers.

This movie’s main issue lies in how it clearly doesn’t know who its audience is. Netflix cast an influencer popular with a very young demographic, while the film is a remake of a story important to much older people and included performances by Rachel Leigh Cook and Matthew Lillard, both members of the “She’s All That” cast. This movie has some explicit language and makes multiple references to people having sex, including at least one fairly graphic innuendo, which also matures the film’s content.

The quality of “He’s All That” paired with its leading lady seems geared toward a very young audience. There’s an extended dance battle scene at the end of the film that reinforces this. There is a clear disconnect within the film from the production side and this creates a lot of the problems that make the movie hard to watch.

Many of the problems in this film would be solved with more clarity within the production team about who this is for and maybe even removing its association with “She’s All That.” This story would make much more sense as a stand-alone film rather than a failed attempt at the remake of a classic.

“He’s All That” isn’t the worst movie of the year, but it is deeply flawed. Some critics completely panned the film, but it’s not as bad as they make it out to be; there are just issues within the production specifically that, if solved, would elevate it substantially.