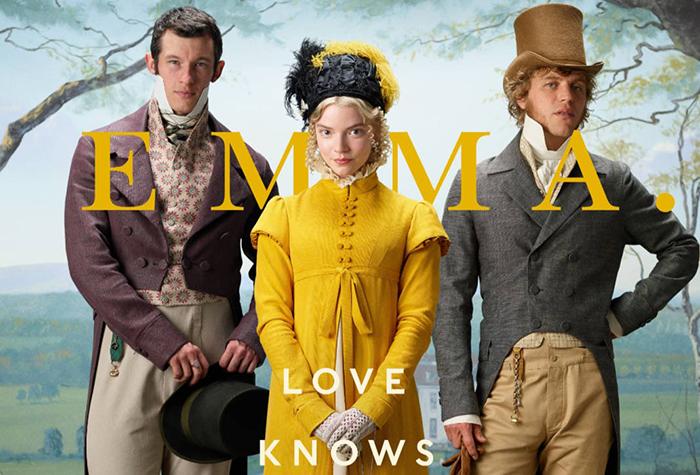 Watch out Jane Austen fanatics, rom-com lovers and worshippers of “Clueless” — the timeless tale of a high-society snob is back again. The latest version of Austen’s 1815 comedy, “Emma,” stands out from past film adaptations for its dreamlike nature, quirky performances and eloquent style.

For those who wanted to see this film in theaters but couldn’t due to social distancing recommendations, “Emma” is now available for streaming on all major platforms including iTunes, Amazon, YouTube, FandangoNow and Google Play.

The actors achieve the perfect balance of subtlety and exaggeration, making the film worthy of its placement in the comedy genre. Their expressions and movements bring Austen’s eccentric characters to life in a way that allows everyone — even those who aren’t inclined to 19th-century humor — to join in on the laughs.

Set in the English countryside, “Emma” transforms the typical Jane Austen setting into a vibrant, colorful, enchanting dream. Between the cotton-candy blue walls and the bubble-gum pink dresses, the screen almost always resembles an Easter basket explosion — in the best possible way. In comparison, the characters’ surroundings in previous adaptations like “Emma” (1996) starring Gwenyth Paltrow or “Clueless” (1996) — the story of “Emma” set in present-day — look dim, dull and dusty.

It is only fitting that the titular character, Emma Woodhouse, lives in a glorified dollhouse since she spends the entire film treating her peers like dolls in her own game. Without intending to be malicious, she meddles in the lives of those around her simply because she has nothing better to do.

Austen’s satirical depiction of wealth exposes the frivolous nature of upper-class citizens. The story follows Emma as she remedies her boredom by using her own popularity to increase the social status of a friend. The series of events that follow bolster the idea that privileged people too often make decisions without fulling understanding the consequences.

Despite Emma’s judgmental, selfish and manipulative behavior, her positive intentions are undeniable. Viewers and readers alike love Emma because she is a confident, yet coy protagonist who is not afraid to show how clever she is. Her strong-willed attitude is commendable considering how little freedom women had during the nineteenth century.

Even though the story of “Emma” is over 200 years old, its key messages are still relevant today. Carriages, courting and corsets may no longer be in style, but class systems still remain a cornerstone of society. If anything, “Emma” is a lesson that self-transformation is possible. It is never too late to treat others with respect, kindness and dignity regardless of their background, wealth or popularity.