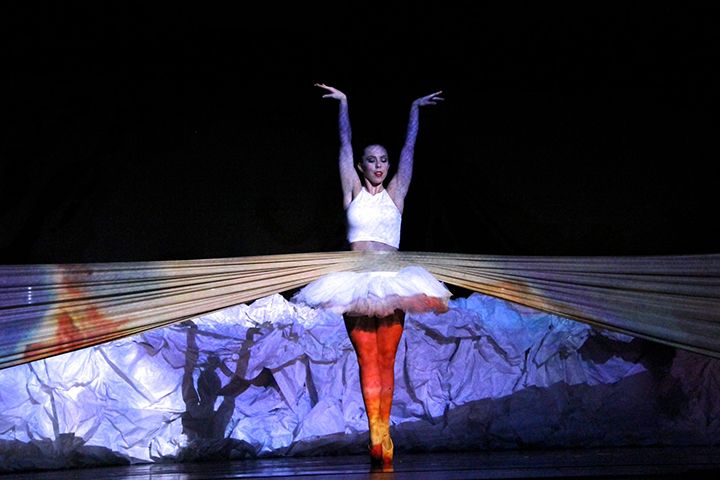 If dance is considered an art form, what happens when art becomes a part of the dance?

This year’s Dance in Flight showcased famous art pieces such as Monet’s “Water Lilies”, Leonardo de Vinci’s “Vitruvian Man”, and many others from various eras, according to the DIF program.

“I think if you just look at the costumes in general you get the sense that it [the show] is about art,” Rebecca Murphy, Dance in Flight Costume Designer and senior psychology major said. “We use a lot of really flowy fabrics and drapey stuff that is really aesthetically pleasing that move kind of like you would expect a painting to move.”

The costumes played an active role in telling the story of the different art pieces and acted as a form of art themselves.

“The fun thing is they’re all so different,” Meghan Mcdonough, Dance In Flight choreographer and dancer and senior theatre major and sports medicine minor said.

Certain costumes featured simple chiffon, but were draped intricately for earlier century art pieces such as “The Winged Victory of Samothrace” (200-190 BC). Others were more structured for retro and modern pieces such as “Pop!” according to the DIF program.

“I like the piece I’m working on right now, this is for lyrical and is based off of a Monet painting of ‘Water Lilies’,” Murphy said while putting the finishing touches on the dress. “This one was really fun to create and was a pretty build. It is so beautiful and taking inspiration to look at to try to look liquidy and flowy. It was a challenge, but I think it’s going to be the most rewarding piece.”

For other art forms, costumes were kept simple to allow the dance and scenery to do the talking, such as “Composition VII” (1913) according to the DIF program.

“My main focus was definitely for movement just because there is so much that could go wrong if something’s not created sturdy enough,” Murphy said.

The costumes were not only movable, but also featured a lot of trends that are in fashion at the moment, Murphy said.

“There’s a lot of other people’s costumes that I would really like to buy and wear all the time like the ones in [DIF dancer and choreographer] Melinda’s piece [Remember Me],” Courtney Grande, DIF dancer and freshman sports medicine major and English minor said.