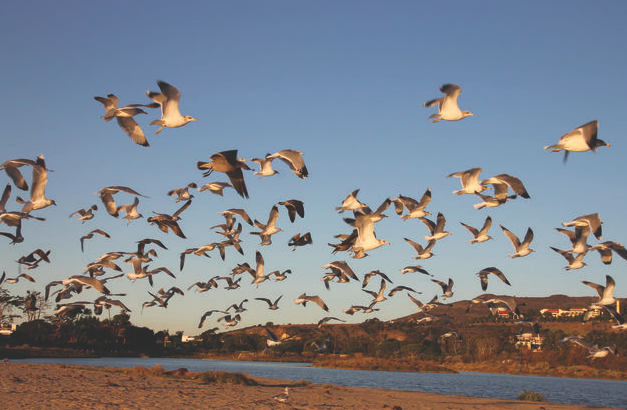 Genesis 1:1-25 describes the creation of the world as told by the Bible. As God created the world, starting with darkness to light, water to land, it is written that:

“The land produced vegetation … and all the creatures that move along the ground according to their kinds. And God saw that it was good.” (NIV)

The Bible tells readers that the Earth, our planet on which we have grown and learned since the beginning of creation, is a beautiful creation of God. It wasn’t until six days into Genesis that it is said Adam and Eve were first placed in the Garden of Eden, with the words, “Rule over the fish in the sea, the birds in the sky and over every living creature that moves on the ground.” (Genesis 1:28 NIV)

While it is said that man was given the Earth to rule, that did not give Adam and Eve the power to destroy the work of art placed before them.

A king who is considered a successful ruler has protected both his people and his kingdom from devastation; a human who rules over the land should also protect it from ruin, not only for the sake of religious ideology but for the future of mankind.

There is an indisputable truth that everything in our world is part of a delicate system. Trees take in carbon dioxide, utilize water and sunlight to grow, and release oxygen, of which all breathing animals must have to survive. Humans and other animals exhale carbon dioxide. Creatures that do not photosynthesize use the energy of the trees and other vegetation to create energy, or they eat the meat of another creature that utilized that energy, all of which is renewed back into the cycle.

Within this system is the ultimate piece of the puzzle: Life and death all depend upon the precious cycles of nature. Should those cycles be disturbed, it is not difficult to imagine the devastation that follows.

This puzzle and the way in which nature is so expertly bound together is evidence of the work God put into the planet for life to be sustained. Therefore, it must be cherished.

For those who do not believe in a higher power, there is absolutely another reason to argue for saving, protecting and cleaning our environment: Our world is not renewable. We do not get a re-do when it comes to this planet, our only home in our vast solar system.

How many videos are uploaded to the internet of a kind person saving a turtle or a seabird from a plastic bag? Does this not give way to evidence that we as human beings have hurt our fellow Earth-inhabitants?

How did this happen? Climate change and human impact on the environment became evident after the onset of the Industrial Revolution. The 19th century saw massive increases in urbanization and technology, from factories to coal-powered engines and eventually, automobiles and trains. In the 20th century, evidence of the effects of these advancements began to appear.

A catastrophic Dust Bowl hit the Midwest in the 1930s in line with the Great Depression. According to history.com, the land on which thousands of families farmed and harvested was overworked and in response, the agricultural plant life began to die.

Without the topsoil to sustain crops, plants withered and the land became a dry, desolate landscape susceptible to massive dust storms. This phenomenon, which devastated thousands of families and hundreds of thousands acres of farmland, caused massive famine and economic damage. The land had revealed a new reality, not even our soil is invincible.

In 1952 London suffered a horrific fog, composed of sulfurous fumes from coal fires, exhaust from vehicles and power plants. The “killer fog” was brought on by a disturbance in wind patterns and pollution in the air. It lasted four days, with an estimated death toll of 12,000 people and more than 150,000 hospitalizations. Those who survived suffered lingering effects of the polluted air, and are even felt today. Research is now suggesting that a large part of the problem resulted from sulfur dioxide released by coal burning, according to a Business Insider article, published on Nov. 18, 2016.

Today, evidence of pollution is still evident. Smog above major cities such as Los Angeles and Beijing create health problems. Oil fracking destroys the land from the inside out. Extreme weather has hit the planet from California to the East Coast and across the pond.

There is no visible expiration date, but our world is dying before our very eyes. Polar ice caps which have sustained life for thousands of years are now melting. Glaciers have begun melting atop the highest mountain peaks, the fish we eat in our sushi is contaminated with plastics and waste, and the rainforests of South America have been utterly devastated. Humankind must do better.

This is not to suggest one should feel disgusted over the advances humankind has made. As a species, we have created incredible things, art, technology, music and more. This is not intended to shame the advancements we have made, but instead to urge for progressive thinking.

This planet is not ours alone. It belongs to the animals and plants, even the bacterium, that depend on it. But above all, it belongs to the future generations. Our children and their children will someday be in charge of the planet. To provide them with hope for a clean and healthy future, action must be taken.

Funding must go into major restoration projects, such as ocean cleanup prototypes, and preventing further damage to physical ecosystems such as the rainforest are small steps in the right direction. Rather than suffer a devastating situation similar to that in “Wall-E,” mankind must embrace the technologies such as solar power and wind energy, which are available to improve our carbon footprint and put efforts into reversing the damage already done.

Once upon a time, humankind did not know nor understand the impact they could have on the planet. But humans are smarter now. The science behind climate change is evident in everything we see, from the food we eat to the land we hike on. Because we understand the devastation we can cause, it’s important to push forward to improve our technologies to clean the environment, prevent further damage and create sustainability that will last beyond our lifetimes.