An American flag cradles a Bible, symbolizing the relationship between national identity and religion. Photo by Megan Williams

Some 401 years ago, a group of Puritans landed in America seeking religious freedom.

And 234 years ago, the Founding Fathers created a system of government that protected religious expression.

Still today, religious symbols abound, from presidents swearing in on a Bible to “In God We Trust” on U.S. currency.

For the entirety of the United States’ existence, religion, specifically Christianity, has played in the wings of its history. The role that religion should play in the U.S. has long been contested. While 54% of the nation supports the separation of church and state, 15% believe the federal government should declare the U.S. a Christian nation, according to a March 2021 Pew Research Center survey of more than 12,000 U.S. adults nationwide. That number rises to 35% among white evangelicals.

During the Jan. 6 Capitol riots, the Associated Press reported that symbols of Christian fervor were on full display, from signs exhibiting Christian messages to rioters leading prayers in the evacuated Senate Chamber. This violent and public collision of politics and religion sparked debate for Christians on where the line lies between a healthy patriotism and a harmful nationalism.

Many Americans honor the men who founded the U.S. as patriots. Americans also honor veterans who laid their lives on the line to protect the country, and every July 4, communities across the nation are gripped with patriotic pride.

Now replace the word patriot with “nationalist.” How does that change what’s being said?

Whatever connotation one associates with nationalist, it’s probably different than what one thinks when one hears patriot. In the Merriam-Webster and Oxford dictionaries, patriotism and nationalism have two distinct meanings. Most commonly the distinction is that while patriotism is a love for one’s country, nationalism is extreme support for one’s country that comes at the exclusion or detriment of other nations.

“Patriotism is, I would think, simply love of country,” Hughes said. “Nationalism is certainly love of country but it’s more than that. Maybe even just a totally and uncritical allegiance to country.”

Other experts in the field differ on their view of the two ideologies.

“Basically, patriotism is a nice synonym for nationalism,” said Joel Fetzer, distinguished professor of Political Science at Pepperdine. “I think it’s basically people who are nationalist, who want to feel good about themselves. They say they’re patriots, but it’s the same thing. It’s basically worship of the state.”

For many students and Americans in general, the distinction between patriotism and nationalism can be challenging, but most noted that there is a distinction.

“Patriotism is actually quite the opposite of nationalism,” said Adian Imbrogno-Mastin, a junior Philosophy and Political Science double major and vice president of the Pepperdine College Democrats. “Patriotism is the ability to contribute to the betterment of society, within your given national context. Whereas nationalism, I feel that there’s a negative connotation to it. Nationalism seeks to promote superiority.”

Still others see the two as almost interchangeable.

“To me they’re almost synonyms,” said Jacob Vanderley, a sophomore Accounting major. “Nationalism is really just having pride for your country. I guess patriotism you could say is doing what’s right for your country.”

While patriotism and nationalism may be challenging to define for each person, they certainly don’t exist in a vacuum. The interaction between Christianity and American national identity has a long history, one that greatly impacts the nation to this day.

“If you said ‘What’s the difference between patriotism and Christian nationalism,’” Hughes said. “That’s a huge difference.”

Since the arrival of colonists, the American church has seen waves of religious zeal, great awakenings and revivals.

Christianity continued to develop and adapt to American democratic mores through the 18th and 19th centuries. Pepperdine’s own tradition, the Churches of Christ, has roots in the early 1800s during the Second Great Awakening. Americans continued to remain majority Christian, elevating Christian ideals.

Hughes believes that the connection between race and Christianity in America is incredibly important, and that the U.S.’s history of slavery ultimately prevents it from being a Christian nation. Fetzer corroborated this belief.

“Now, many of the slaves considered themselves Christians, and I would argue were Christians,” Fetzer said. “But they were not recognized as such by the people that were writing the Constitution, running the government and so on, who were overwhelmingly, especially in the South, slaveholders.”

Hughes believes that the 1960s, including the Civil Rights Movement, were a cultural turning point for the U.S., especially for the American church.

“In the aftermath of the 1960s, a lot of Christian evangelical fundamentalists launched a major movement to reclaim America as a Christian nation,” Hughes said.

One of the goals of the movement was to “try their best to elect Christians to every office in the country from the president of the United States down to the local mayor,” Hughes said.

The Moral Majority folded in 1989, but Falwell, Robertson and Reed continued to be outspoken figures and other grassroots efforts continued, Hughes said. Church leaders still promote political campaigns. Almost a third of Americans believed that the outcome of the 2016 presidential election was God’s will, according to a 2020 Pew article. The amount of white evangelicals that voted for Trump increased from 77% in 2016 to 84% in 2020, according to a 2021 Pew Research Center article.

A billboard and the question of idolatry

Displays of Christianity within political contexts are prevalent in America. Hughes pointed to an image of a billboard he came across, which a Tennessee pastor first photographed outside Fort Oglethorpe, Georgia. The billboard features an image of former President Donald Trump and says “Unto us a son is given and the government shall be on his shoulders.” 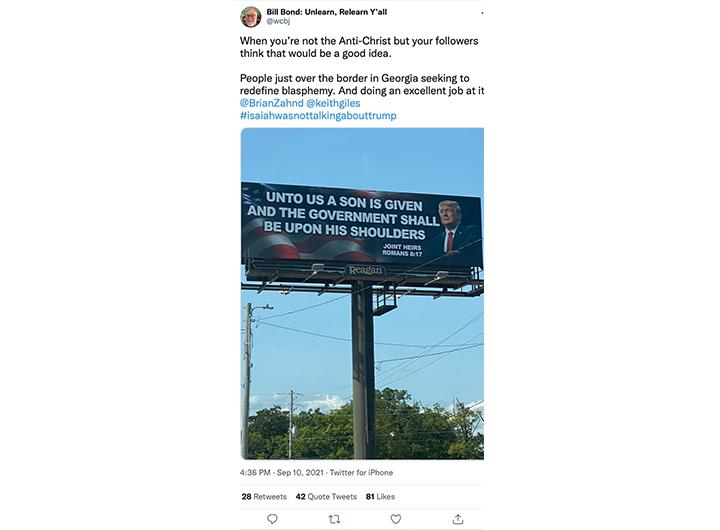 In examples such as these, Christians grapple with the issue of idolatry.

“I wouldn’t say it’s absolute idolatry,” Imbrogno-Mastin said. “I do think they idolize this figure, and were using this as a way to advertise their ideology or their particular beliefs, but this is disruptive.”

Vanderley also believes that Christian images within politics can come across as disingenuous.

Whether it is this specific example or any other situation, Eric Wilson, preaching minister at the University Church of Christ, described idolatry as placing “other things equal to God or above God.

While the extremism displayed in this image and at the Capitol riots may be startling for some, they’re nothing new.

“I think that’s something we forget is religious extremism exists in all religions, and in all countries,” said Joseph Heinemann, a sophomore History major and Jewish American. “And we kind of tend to pigeonhole it into various different stereotypes. When in reality, religion has always been used to push politics in every country and within every religion.”

Striking the balance between American and Christian principles

“I love the idea of the pursuit of happiness. I want happiness, I want other people to have happiness,” Wilson said. “It’s when I hold on to that high value to such a degree that I can’t see the shadow I cast and the damage that it does, then it moves into nationalism.”

Students agreed that Christian principles shaped the nation. Regardless of their background, none thought that Christianity should dominate the nation or control the government. Imbrogno-Mastin rejected the idea that the U.S. could be considered “God’s chosen people,” a common belief that is often a point of contention.

“Rather, I think that we are all God’s chosen people,” Imbrogno-Mastin said. “I don’t think it’s limited to any nation-state or any type of culture, race or sexual orientation.”

Vanderley also believes that Christian principles provided moral guidance to early Americans who created the country, but didn’t go much further than that.

“Obviously, it’s not a theocracy. I think that’s important to remember,” Vanderley said. “But I don’t think just Christian principles are necessarily negative. Because religion, when you come down to it, fundamentally, the values are relatively similar between them.”

Even those who are not Christian think that certain values shouldn’t be limited to one religion or nationality.

“Equality, and treating people with equal rights and things like that, I wouldn’t even say is something that is a Jewish value, or a Christian value, or any kind of religious value,” Heinemann said. “I’d say that’s more of a human value, that may be represented in different religious traditions.”

For Americans who are not Christian, like Heinemann, calling the U.S. a “Christian Nation” can seem discriminatory.

“I do find it difficult, because by interpreting America as being a Christian nation, that definitely excludes a lot of religious faiths,” Heinemann said. “And I do think it is frustrating, and even in some ways, dangerous to just refer to it as a Christian nation.”

Fetzer takes a more critical stance on America’s religious status, believing that because of the treatment of certain marginalized groups, the U.S. can never claim to follow Christian principles.

The ultimate question of allegiance

The idea of balancing citizenship and faith is a common theme throughout the Bible, especially given that the Israelites faced slavery, exile and occupation.

“In the Old Testament stage of faith, you are the people. You are my people. You are tied to a land. You are a citizen of the land, and you have unique rights and blessings,” Wilson said. “So even in the Old Testament stage of faith, there was this nonbinary way of holding your nationalism. Then Jesus comes and fills, expands, makes that idea whole where you are part of a nation, an earthly nation, but you are also part of heavenly kingdom. So, in some ways it mitigates the borders of your national status.”

In the New Testament, Jesus confronts the question of how the Israelites should respond to Roman demands. His response is often brought up in the context of faith, identity and civic duty.

“Many Christians, conservative and some liberal Christians as well, when you ask the question about the Christians’ obligation to government, they’ll run immediately to Romans 13,” Hughes said. “Obey the government, do what the government says, render to Caesar what is Caesar’s, to God what is God. But then you go to a text like the Book of Revelation, it’s a whole different story and the message of Revelation is ‘Do not pledge allegiance to the empire.’”

Ultimately, an American’s faith and how it interacts with their national identity is a personal choice, and one that differs greatly across the broad spectrum of American Christianity.

“How many times can we just be [so] blinded by the quest for the pursuit of happiness or freedom that we end up hurting each other, and hurting people outside of us?” Wilson said. “Maybe we hold a little bit too tight. I’m not saying letting it go. I’m just saying hold it a little bit looser, so that we have enough clarity just to see what it’s causing.”

Wilson is not alone in believing Americans may need to “hold it a little bit looser.” When it comes to the United States and the Kingdom of God, Hughes believes that some American Christians need to get their priorities straight.

Some Christians take a radical approach to their faith, basing it off of the radical mission of Jesus in a Roman-occupied state.

“Jesus, he talks to people that in his day were complete pariahs,” Fetzer said. “So he hangs out with lepers and prostitutes and people from the wrong side of the tracks, with Samaritans. He goes out of his way to insult, to offend the people with power in his day, the people who were prestigious in his society, because he said, he calls them out for oppressing people, and sinning. That’s radically different from what the authors of the U.S. Constitution set out.”