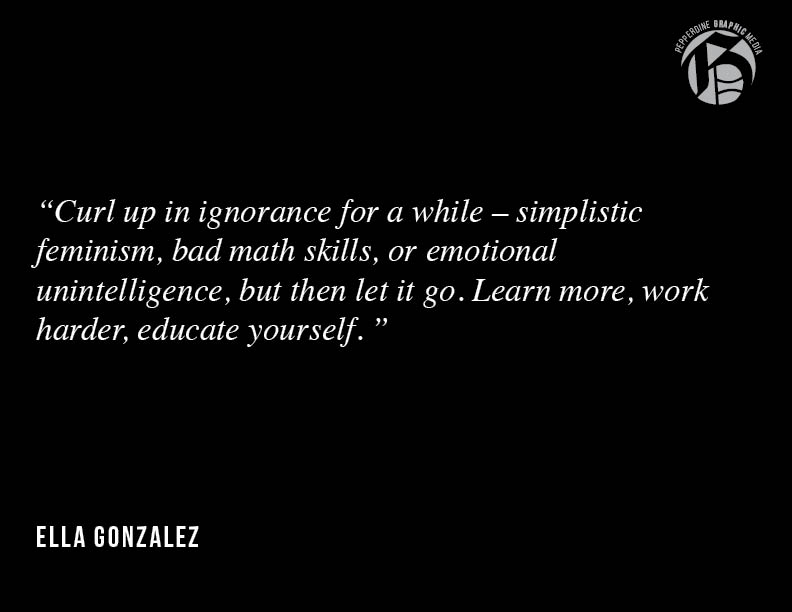 I have never shied away from the label “feminist.”

I tacked it on to the list of adjectives and identifiers I associated with myself since its true meaning had been unveiled to me my sophomore year of high school. It joined the ranks of awkward, quiet, INFJ, and mayonnaise-averse in the definitive list of labels to describe myself. It had been a label worn with pride as various “feminist”-labeled pins and stickers from Etsy accumulated, but it was a label that was commodified and trendy and when I claimed it for myself it had largely gone unchallenged, that is, until this past year.

Like most controversial things, it happened at a family gathering. Pass the gravy, the stuffing, the basket of misogyny. It began with “well Ella’s a feminist,” and a swift rejoinder “well why?” My feminism, thrown under a bus – a family minivan.

I couldn’t come up with an eloquent answer as to why, the philosophies and wisdom of bell hooks and Gloria Steinem deserted me and I was only left with my own awkward, quiet, mayonnaise-averse intellect.

And it did, it certainly made sense. Rationalizing something so intuitive and mathematically perfect seemed futile: female+belief in equality=feminist. But this can also be a reductive and simplistic view of feminism, one that only people like myself – straight, able bodied, white (I’m half Mexican, but have you seen me?) –benefited from. As I looked into the distance trying to feign interest in football and avoid eye contact with my accuser, I chided my failure to the “woke” millennial community.

But it’s OK to not know all the answers to a question or always reply with a snappy rejoinder, to have a tenuous grasp on a subject, or none at all.

Young people often fall into the trap of believing that they will remain stuck in their current intellect and breadth of knowledge, that every blundering or mistake, a missed chance to elaborate further, is the end of the world. Like most millennials, I simultaneously think I have all and none of the answers, but in reality, I only have a fraction of them and an ability to maneuver a smartphone.

Curl up in ignorance for a while – simplistic feminism, bad math skills, or emotional unintelligence, but then let it go. Learn more, work harder, educate yourself. And don’t take a roll from the misogynist bread basket.