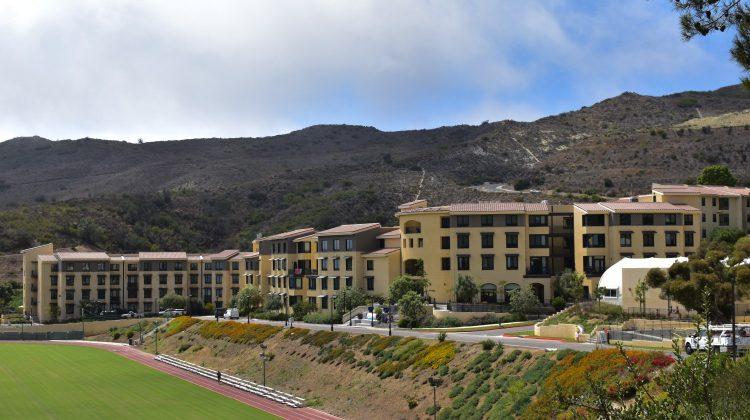 Pepperdine is located in Malibu and while attending a university in such a “‘brand name’ beach community” has perks like running into celebrities at Whole Foods and on Ralphs Beach, it has a few downsides. Students said finding a place to live in Malibu proves to be a challenge due to steep rent prices that limits them to on-campus living, further contributing to the overcrowding of Pepperdine dorms.

With Pepperdine’s limited housing, upper-level students are not guaranteed on-campus accommodations. Instead, first-year, second-year and transfer students must live in dorms per the University’s Residency Requirement, and therefore have priority.

In the 2022-23 academic year, out of the 2,400 students who live on campus, over 1,600 of these residents are first and second-year students, wrote Lucy Man, communications and marketing manager for Housing and Residence Life in an Aug. 25 email to the Graphic.

650 upper-level students secured accommodations for the 2022-23 academic year, Man wrote. Though over 2,400 students will be living on-campus this year, the Housing office did not disclose how many students applied for those spots.

While students said the University does its best to accommodate all, upper-level students said there is simply not enough room or resources applied to make living on or close to campus easily accessible.

“If our school cannot provide adequate housing to its students, then we are expected to find off-campus housing in a real-estate world that is targeted toward A-list celebrities and Silicon Valley millionaires or CEOs of multi-million or billion dollar companies,” junior Sahnet Ramirez said. “It is so unrealistic and unfair to throw students into that situation.”

Out of all on-campus housing, Seaside Hall is the least expensive at $6,900 a semester for a double-occupancy room. However, for upper-level students who want to avoid living among first and second years, Lovernich apartments cost $7,225 a semester while George Page apartments offer a double occupancy room for $7,600 per semester.

At $9,200 a semester, single occupancy rooms at Drescher are the most expensive option for upper-level students living on-campus. Located apart from the Seaver campus, Drescher houses both Seaver students and students from Pepperdine’s graduate schools. Though this allows for more undergraduate students to live on campus, this limits the number of graduates allowed to live in on-campus housing.

Students said while off-campus living allows for freedoms that on-campus housing does not, it’s not the most convenient option for students attempting to save money.

Malibu’s housing expenses are 630% higher than the national average, according to a report by Payscale. The cost of living is 186% higher than in other cities in the U.S..

Students said they often look at residences in nearby cities to find budget-friendly living arrangements. However, two of Pepperdine’s closest neighbors, Calabasas and Pacific Palisades, are some of the wealthiest neighborhoods in Los Angeles County, according to L.A. Business First.

Students said finding housing in and near Malibu’s ZIP code poses serious financial obstacles while also requiring access to a car for commuting.

“We were scrambling to find any sort of place to live, so we had to consider places in Agoura Hills or places very far out of our budget in Malibu,” junior Estefania Johnson said.

Despite being miles from the Malibu campus, these cities also charge high rates for rental properties that exceed the national average for housing costs. Regardless, living farther from campus allows for students to find more cost-effective housing, according to Best Places.

Pepperdine’s closest neighbor, the city of Calabasas, possesses a high real estate price tag and houses many Hollywood celebrities, including the Kardashians and Will Smith. Regardless, Calabasas’ cost of living index is double that of the national average. Yet overall, Malibu is 96.5% more expensive than Calabasas according to Best Place, thus making it a more affordable option for students.

Despite Calabasas’ exorbitant cost of living, there are two apartment complexes many students said they tend to flock to when searching for living arrangements.

A popular apartment complex among students, Malibu Canyon Apartments or MCAs, are located at the end of Malibu Canyon off Las Virgenes Road around 11 miles from campus. Though it takes about 20 minutes to drive through the canyon, many students said they make the commute in order to save on rent costs.

Many students also reside at Avalon Apartments, which are located at the start of Malibu Canyon and eight miles from campus. Though Avalon is slightly closer than MCAs are, this is not without a markup in price. While these two properties house many of Pepperdine’s upper-level students, each complex’s rent prices move upwards of $2,500 per month for a one-bedroom apartment, according to MCAs and Avalon’s Apartments.com profile.

“After a stressful application process and countless rejections, we were able to secure a place at Avalon but only weeks before school started,” Johnson said.

However, given the difficulties students face in their search for housing, junior Sahnet Ramirez said the University is lacking on communication. She waited five months before she was given any update on her housing status, after applying for on-campus housing and hearing nothing back from the Housing office.

“My friends and I were forced to look for off-campus housing, which was completely out of our budgets, especially as college students from out of state,” Ramirez said.

Ramirez, who does not have a car on the West Coast, said that even if she did find a place to live off campus, she would have no form of transportation to get to and from her classes. When a spot opened up in a dorm with one of her friends she contacted the Housing office repeatedly and asked to be moved into the vacant spot.

Though the Housing office initially told her she would be informed if a spot opened up, Ramirez continued to persist. A few days after reaching out, the University sent an email notifying Ramirez she had been given on-campus housing.

“The longer we had to wait for a direct answer from housing, the opportunity to find off-campus housing was becoming more scarce,” Ramirez said. “Fortunately, it worked out, but we practically had to beg for a resolution which isn’t pleasant for anybody to go through.”

While upper-level students said that securing on-campus accommodations generally proves to be difficult, students said the process can be more complicated if a student is abroad while planning for their future in Malibu.

While studying in Florence during the 2022 spring semester, junior Elijah Gatling said he faced delays while applying for housing. By the time Gatling could access the Housing portal, few options were left.

Gatling said he was then placed on the waitlist for George Page, and left in the dark about what came next in the process.

“I was wondering if I would get housing for the semester,” Gatling said. “In anticipation, I was emailing people, and I didn’t get a response and got sad. I was like, ‘Crap, what am I gonna do? I’ve been abroad, and I have nowhere to live.’ I was basically trapped.”

After Gatling met online with Housing, he said they helped accelerate his housing application, and he secured a spot in Drescher. Despite a less-than-perfect process, Gatling is happy to have a home for the academic year.

“There isn’t really that much communication when it comes to housing until it comes up soon,” Gatling said. “It’s just the stress that comes with the lack of communication from Pepperdine itself is what made the process very hard to understand. I am grateful that I was able to find housing on campus, although it did take a while. I appreciate Pepperdine being able to do this for me.”

Johnson said the process was even more difficult because she was 6,000 miles away from Malibu in Lausanne while navigating housing. Though she had intended to live at MCAs with friends, her plans fell through when a roommate pulled out of their lease transfer agreement at the last minute. She had to find a new housing solution less than two months before school.

“It was just like a punch to the gut, thinking you’re so set and have everything ready, and then boom, now you’re at square one,” Johnson said.

When Johnson found another person to live with, the race against time was on. She said the group had initially tried for MCAs yet they could not secure a spot due to the extravagant fiscal requirements needed from a co-signer. It took about a month and a half before Johnson and her group were able to sign a lease in late July.

“We got really lucky because for so long we were just waiting to see what places would take us so last minute, but I’m thankful we were able to find a new person quickly enough and can live decently close to school,” Johnson said.

In response to upper-level students’ criticisms about obtaining on-campus accommodations, Man wrote Housing is committed to having students on campus to the maximum extent possible.

“Students are welcome to remain on our housing waitlists throughout the summer should a space open up,” Man wrote. “While outside of our department’s purview, we hear and empathize with student concerns when campus housing fills.”

Nonetheless, upper-level students said it could be in the University’s best interest to create more economical accommodations to house its students, even if through more affordable off-campus housing run by the University. Students said that the University should be more transparent and communicative with students before, during and after the housing application process.

“It’s my hope that I can use what I’ve learned through this difficult process to not only prepare myself properly for next year’s housing, but to bring awareness to others who might face the same challenges my friends and I did,” Ramirez said.