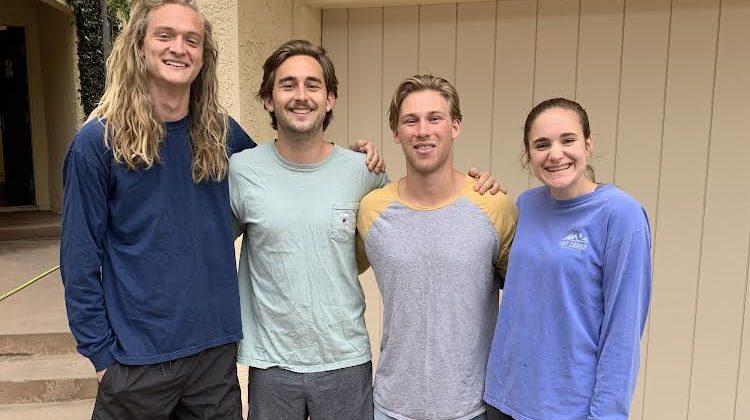 On the far right, Jenn Gash smiles big as she interns at a youth ministry in summer 2019. The Religion Division has funded Gash’s internship, as well as many other students, through the division’s annual Summer Ministry Internship Program.

Asking students around campus the go-to question, “What’s your major?” reveals the multitudes of majors a student can choose at Pepperdine. This begs the question: “Why Religion?”

According to the Religion and Philosophy Division, the Religion major offers students a deeper understanding of the Christian faith, scripture, biblical interpretation, theology and more.

“Being an academician in Religion and in bible, and a person who still is very active in my church, I would hope that students would gain some skills in trying to think through all of the factors involved in being a good person, a virtuous person,” Professor Timothy Willis said.

Religion professor Timothy Willis is a strong advocate for studying Religion, especially the Old Testament in Religion 101. Willis came to Pepperdine in the final year of his graduate program and hasn’t turned back for the past 33 years.

In the spring of 2021, Willis invited senior Religion major, Jenn Gash, to be the TA for his Religion 101 class. Gash shared that there was no doubt about choosing her Religion major.

Gash said she found her most memorable experiences were when working with her Religion professors. In summer 2020, Gash completed research with Religion Professor Dyron Daughrity on a world religions textbook and in a group project called cross-disciplinary, interdisciplinary research.

“[This experience] made me feel like someday maybe I could write a textbook, so getting to watch that process was really informative for me,” Gash said.

Gash said that studying abroad in Buenos Aires in spring 2020 was also a highlight of her experience in the Religion program. Furthermore, Gash said that going abroad may prompt students toward adding a Religion major or minor.

As with all majors, there are benefits and detriments to studying Religion, Willis said.

“[A pro is] we are talking about things that should be of interest and are significant for the lives of students in a variety of majors,” Willis said. “I think a con is, frankly, Southern California in some ways.”

Willis said a common barrier, which even he struggled with, that faces potential Religion majors is the increasing cost of living, especially in California, and lack of lucrative career opportunities.

“I had people telling me that I needed to do something more practical than a Religion major, but somewhere toward the end of my junior year, I realized how much I enjoyed, frankly, what most people would consider boring and technical,” Willis said. “I decided, if that’s what I want to pursue, I should pursue it.”

“One of the hallmarks of the Religion program is the fact that we’re calling on students to pull together things, not only from scripture, but from history, thinking, theology, philosophy, education, all of those things, and use them in their lives and their careers,” Willis said.

Gash said the Religion division provides the opportunity to expand open discussion and thinking. She learned a technique in her classes called “windows and mirrors,” where you find similarities and differences in colleagues’ stories.

“That human interaction in learning how to see yourself and others but also see our differences and respect other people’s stories is something we work on a lot,” Gash said.

Gash said being open to other opinions and theories has also been one of the hardest things about the Religion major. The pre-existing beliefs students walk into the Religion division will be challenged and possibly changed once they’ve walked out.

“Something hard for some people is going through a period of deconstruction and reconstruction of your faith, and learning various interpretations of Scripture and things that kind of go against what you’ve been taught, sorting through what you believe, and being graded on it,” Gash said.

In light of this challenging portion of the major, Gash said studying at Pepperdine puts students in good hands whenever discussing complex subjects.

“For the sake of mentorship, and for the sake of having your professors pray with you and for you and be able to talk through those spiritual struggles, they are all very open to that,” Gash said. “They’re not just going to throw something at you and expect it not to affect you emotionally because they’re also Christian.”