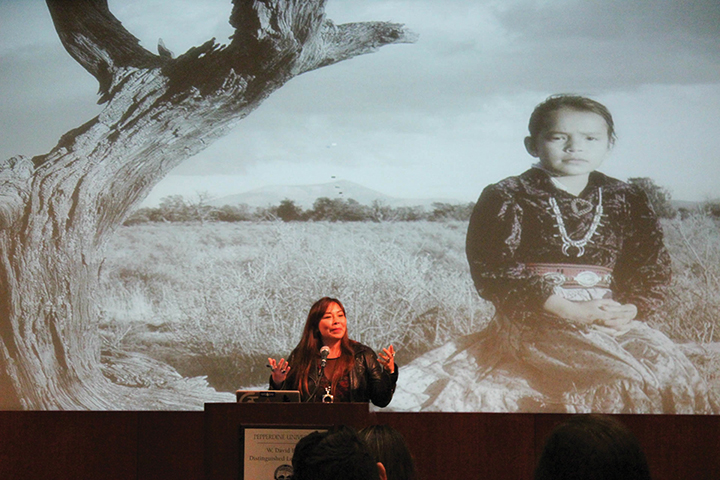 The lecture covered the lasting stereotypes of Native Americans and how these misconceptions prevent them from moving forward from their past. The discussion related to her exhibition, “Seed of Culture: The Portraits and Stories of Native American Women,” is on display in the Waves Cafeteria, until April 6.

The exhibition, which was previously showcased at Harvard University, is part of a larger project of Wilbur’s called Project 562, a collection of photographs of Native Americans from all 562 tribes. Wilbur road-tripped across the country, personally visiting each tribe and meeting thousands of Native Americans along the way, learning their stories to show true depictions of contemporary Native Americans.

During the lecture, Wilbur said Project 562’s purpose is to ask people, “to seek a different narrative — one that seeks to include indigenous people.”

The project came into fruition from Wilbur learning about sexual assault and domestic violence cases that Native American women have experienced. Wilbur, “decided to put together a show that honors complexity of native women,” she said. Wilbur said she wanted to shift their depictions, “beyond the story of sadness and the story of trauma and take on what they are today.”

Sophomore Ansley Rathgeber said she was drawn to the exhibit as she, “was interested in learning more about Native American culture and heritage.”

“There was a clear focus on native women, and you could tell that each woman in the photographs had her own story. I wanted to come and hear them,” Rathgeber said.

Wilbur’s work was noticed by Dana Dudley, assistant dean of Special Academic Programs, who works on planning for the Distinguished Lecture Series. Dudley was looking for “a speaker in commitment to push for diversity and inclusivity on campus.” She said, “We wanted to include multiple ethnicities in that conversation and reflect that message in the Lecture Series.”

The lecture is the first to have an art exhibit paired with it. The exhibit’s placement struck the interest of many students as it is displayed in the Waves Cafe, on the same wall where the controversial wooden mural depicting Spanish settlers alongside Native American women, was once present. 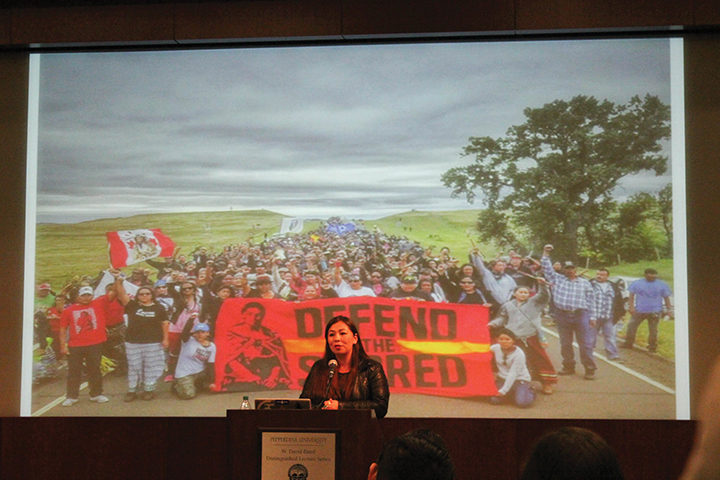 Braun said she saw the placement of the exhibition as an important action that Pepperdine took in favor of inclusivity.

“I believe Pepperdine’s move to cover something that made the Native population at Pepperdine feel separated from the students and values of the university, with Matika’s work — which means to honor the indigenous and unite all races — was an important step towards the solidarity of all people in this community,” she said.

During the lecture, Wilbur’s message was one that focused on telling authentic and contemporary stories in order to promote inclusivity and avoid ignorance.

“We have a responsibility to learn about one another and engage with one another as community members,” she said.

Wilbur also critiqued the American eduction system for not including the real history of Native Americans, as well as the history of other minorities and indigenous people, outside of the elective system. She faults the absence of these stories as the cause of racial and ethnic discrimination.

“Inhuman treatment of native people comes from miseducation, and until we start telling the truth we continue to see the same results,” she said.

“I think that we were taught American history through European eyes, and there are so many voices and stories that don’t get told,” Hall said.

Wilbur spoke of the current issues that are fueled by miseducation on indigenous history and culture. She gave an example of her own experiences when documenting the protests at Standing Rock, a Native American reservation in North Dakota where protesters are speaking out against the construction of the Dakota Access Pipeline. 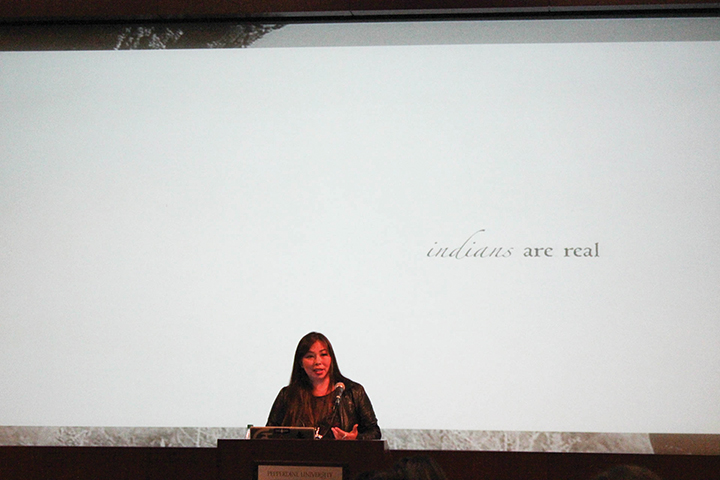 She explained that Standing Rock is a sacred land to them because it plays a part in their creation story, which is the reason why they were against the placement of the pipeline.

While in office, President Barack Obama halted the construction of the Dakota Access Pipeline, but President Donald Trump’s administration will carry on with it. Wilbur said the arrests and reactions linked to these protests is a sign of how far we still are as a country from “this movement for equality and justice.”

Wilbur told the audience there is no excuse for these issues to still occur in a time where we have instant access to information.

Wilbur closed by showing her many portraits of contemporary Native Americans, to demonstrate that there are many faces of indigenous people. She called on the crowd to do their part in learning the real stories of Native Americans, instead of painting them with stereotypes.

“As long as we are represented as people of the past, as long as we are part of your historical imagination, we can never move forward. There is no path to reparation unless we see past these images. We have to all come together, Indian and non-Indian,” she said.