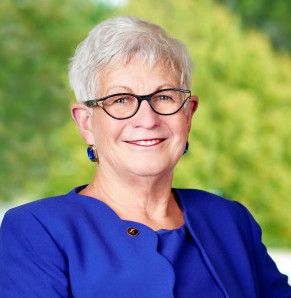 Painted grey birds dappled with white alight on the blue flowers and foliage that adorn the furniture in School of Law Dean Deanell Reece Tacha’s office. The birds painted on her furniture and stitched on her chairs are accompanied by various poetry books scattered throughout her office, images that are perhaps emblematic of the woman herself.

After Tacha’s career fluttering from one place to the next – as a White House Fellow to a judge at the Federal Circuit Court, splitting her time flying between Kansas and Malibu, she is now preparing for retirement as the first female Dean of Pepperdine’s School of Law.

Tacha was born in a small town in Kansas called Scandia, but spent most of her adult life in Lawrence, Kansas.

At a time when most of her female classmates were pursuing teaching, nursing or getting married, Tacha had her sights set on another ambition for a woman of her time: a career in law. Urged by a few trusted male advisers and her own deep-seated ambition to advance her education, Tacha took this less-traveled route, Tacha said.

Prefacing the story with “this is hilarious,” Tacha said her senior year of college she took the LSAT, GRE, and MCAT and “didn’t tell a soul.” After scoring well on the LSAT, she began to think more seriously about going to law school.

“In that time, there were virtually no women going to law school,” Tacha said. “I was a bit of a renegade; it was a very unusual choice for me and a choice that was tough to make, because I never met a woman lawyer, and certainly not a woman judge.”

Her father’s opposition to the profession compounded the tough choice she faced, she said.

“My father was very opposed,” Tacha said. “He thought that I choose something I couldn’t succeed at because he saw no woman lawyers and he had no models. He was a highway contractor and his relationships with lawyers had been anything but pleasant.”

Her father’s aversion to her career choice was mitigated by her mother’s support, she said.

“My mother was more supportive, she had always been a woman who preached that women should do whatever they wanted to do and pursue whatever opportunities they wanted to,” Tacha said.

In addition to the support of her mother, Tacha said that the Dean of Women, Emily Taylor, at the University of Kansas was a pioneer of women’s opportunities, she said.

“Emily Taylor was a pioneer, far ahead of her time on women’s opportunities,” Tacha said. “Urging would be a calm word for what she really did. She pushed women into non-traditional career paths. The women that Emily touched achieved more than they could have ever imagined at the time.”

Armed with the inspiration from mentors to pursue her career and studies, following her graduation from the University of Michigan Law School, Tacha secured a position as a White House Fellow where she was the special assistant to the Secretary of Labor, an experience she describes as “life changing.” After she completed her fellowship, Tacha worked for a law firm in Washington, D.C. At the time, she was romantically involved with the man who would become her husband, the high school basketball coach at Concordia in Kansas. Her partner didn’t want to move to Washington D.C. so she moved back to Kansas where she practiced with one other lawyer in town.

Tacha said that throughout her career, it would be naïve to say that she didn’t experience some of the things that men in her position would not have. Some of these experience she described as “rather startling.”

“When I was being interviewed for the position of the federal court, I was asked questions about how I was going to handle my family, and questions that no man would have been asked,” Tacha said. “When I was a judge I was treated the same, but in some administrative and some social situations, it has been obvious that there’s not the mutual respect for woman professionals like there should be.”

When asked how she overcame the adversity that many women in professional careers face, Tacha said that throughout her career, she has grown cognizant of the implicit biases women face, and through such knowledge, has gained the confidence to speak out about these issues. Tacha recalled a time when she spoke at a diversity forum at the law school regarding ethnic minorities at the school who wanted to discuss issues of fair treatment and equality.

“I remember relating to them how it felt being one of the very few women in law school because it’s not the same exactly, but when you are the ‘other,’ there are some feelings of alienation, fear and trepidation,” Tacha said.

These feelings of alienation and fear have become enzymes for growth and knowledge, Tacha said. Tacha said that it is a great time to be a woman in politics and law, chuckling that perhaps not everyone would agree, alluding to the vitriol of the 2016 Presidential Campaign, including some of the inane discussion over Hillary Clinton’s wardrobe. She did say however, that although women have made great strides, the glass ceiling will take “generations to be pierced.”

Part of this glass ceiling is the ever-present dialogue over the concept of women “having it all,” and striking a “work-life balance,” something that has been familiar for Tacha. Tacha, a mother of four and grandmother to five grandchildren who she describes as the “apples of my eye,” said that striking this balance is feasible for women today. Tacha said that she finds the term “work-life balance” irksome because it fails to account for another integral facet of life: community involvement.

“Everybody, men and women alike deal with this, but when you talk about work and life balance, that is the wrong balance,” Tacha said. “There is an additional thing in the balance, and that is helping the community, and whatever causes or philanthropic issues you are committed to. If all we think about is our own self-interest, we are selling ourselves terribly short. Even for your own happiness, involvement in church, volunteer activities, politics, helps the community and rounds out your personality.”

For Tacha, these activities include involvement in church, international church organizations, issues related to access to justice, public interest and law, and the counseling and mentoring of young women.

Tacha added that the concept of “work-life balance,” is not a modern phenomenon.

“My grandmother was a nurse in a sod house with sixteen cowboys and delivered babies all over the western part of Kansas for forty years and she had children at home and cowboys to feed. These things are not new issues, it’s just that what we call them is new,” she said.

With retirement on the horizon at the end of the fall semester, a sentiment Tacha expressed as “bittersweet,” said she is looking forward to pursuing these community activities in more depth. Along with these community activities, she looks forward to cooking, gardening, seeing friends, and traveling with her husband, although the destination, according to Tacha, is the “debate.”

Vice Dean and Laure Sudreau-Rippe Chair at  Pepperdine University School of Law Shelley Ross Saxer wrote in an email that Tacha was a source of inspiration for faculty and students alike, making connections in the legal and judicial communities.

“As the first woman to serve as dean, she inspired faculty, staff, and students to excel in legal education and the legal profession,” Saxer wrote. “Dean Tacha has been far too humble in sharing the accomplishments she has continued to achieve during her time here at Pepperdine University School of Law. We will miss her terribly.”

For women interested in pursuing a career in law and politics, Tacha gives the same advice she received from some of her own mentors.

“Be yourself and in this case, don’t try to imitate the men around you, use your own voice, appear as you feel comfortable appearing,” Tacha said. “The stereotype that you should fit some mold will impede your ability to be really good at what you do. My advice is to always be yourself and don’t pass up any opportunities.” 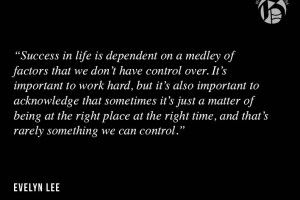 Graphic by Nate Barton In my 21 short years on this earth, I've come in contact with a lot of advice on how to be successful....
Copyright 2013 Jupiter Premium Magazine Theme
Back to top