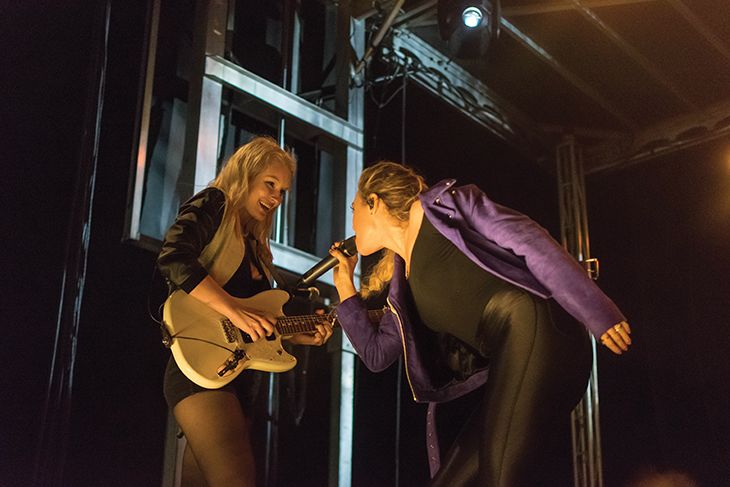 Waves Weekend Concert on Saturday, Oct. 15 featured artist Rachel Platten, drawing in students and their visiting families to Alumni Park for an evening of food trucks, music and the conclusion of Greek Life’s Spirit Week. The event began in the early evening with a lip-sync competition between paired fraternities and sororities, the concluding event of the week’s Greek Games.

“She had a ridiculously good voice,” freshman Keith McGuire said after the performance.

Freshman Max Rickard said, “She could belt it. She was phenomenal.”

The second performing group was the band Jonny Come Lately whose “Latino Skankabilly Soul” groove and use of a didgeridoo quickly drew a number of audience members to dance in front of the stage.

“We were just sitting down eating ice cream and then [Jonny Come Lately] started playing and it was really awesome, so then we started dancing,” Rickard said.

McGuire said, “They just kept us going the entire time. You didn’t want to stop dancing throughout the entire thing.” The band will be playing in Downtown Disney on Nov. 19.

The headlining artist of the night was Rachel Platten, who is best known for her 2015 platinum single “Fight Song,” which is also on her most recent album, “Wildfire.” She made the audience laugh and sigh with her personal anecdotes between songs. One story she told was of her intense desire to grab a microphone and sing when she watched musical performances as a child, and how vital that passion was to her perseverance as an artist. Platten invited three audience members to join her onstage and sing.

“I was amazed at her humility and her great personality and the fact that she would let somebody, AKA me, onstage was just mind blowing to me, that she’s so thoughtful and personable,” Senior Lindsey Fleming said. “When she said ‘I’m going to invite someone onstage,’ I shot my hand up immediately because I knew I wanted to do it and it was an amazing experience… It’s been more recently that I have felt like [music] is where God is calling me and that’s where my passion is.”

Platten said goodnight and left the stage, but the audience’s chant of “one more song” brought her back to end the show with “Fight Song.” Much of the audience sang along, and the event ended with loud cheers and applause.