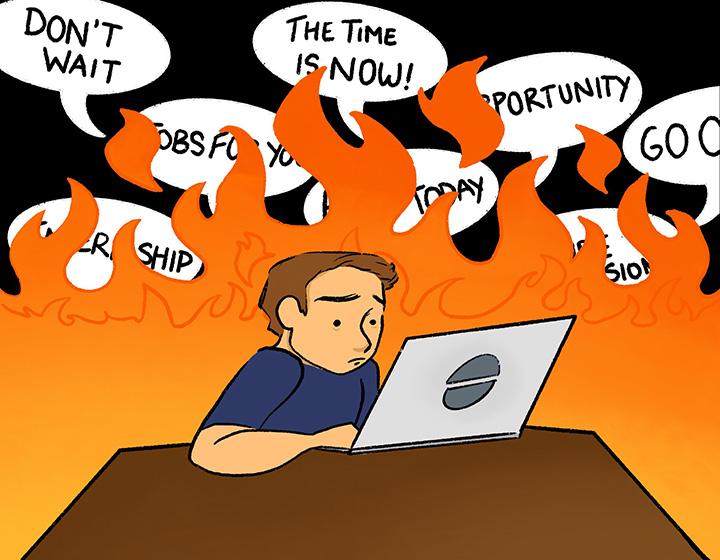 The COVID-19 pandemic has permeated every aspect of life, leaving Pepperdine students and graduates staring into a vastly different world than they imagined seven months ago and hoping their career plans will weather the storm.

In the midst of an oversaturated job market, high unemployment and confronted with an unclear path toward normalcy, some students question their ability to find work after Pepperdine. Others view their future professions in a hopeful, new light.

“We used to talk about major world crises like, ‘Someday, the power grid could go down,’” junior Bridget Johnson said. “But this world crisis we find ourselves in the middle of is very applicable to STEM, chemistry and biology, and it has made me thankful I get to study this type of thing.”

Johnson is pursuing a Bachelor of Science degree in Chemistry and a minor in Spanish. Before the COVID-19 pandemic, Johnson said she planned to attend the summer Spanish Intensive program in Buenos Aires and do chemistry research at Pepperdine.

With the cancellation of International Programs and closure of the Malibu campus, Johnson said she decided to spend the summer working as a pharmacy assistant at Rite Aid in her hometown of Bellevue, Wash.

“While working at Rite Aid showed me I did not want to be a retail pharmacist, it did open my eyes to the future of pharmacy and how important that is in the health care field as we move toward telemedicine,” Johnson said.

Johnson said she was grateful for the opportunity to be a pharmacy assistant, but she wishes she could have completed research this summer to decide whether she is interested in pursuing that career path in chemistry. Johnson also said the pandemic caused her to commit to doing research next summer because it is an expectation for students wanting to go into a doctoral program or chemistry career.

Although the pandemic prevented Johnson from gaining clarity on her future career path, she said she feels hopeful she will find a job after graduation.

“I’m not worried in the sense of finding a job, but it is a difficult economy, so I do keep that in mind,” Johnson said. “But for chemistry, I think we have a unique opportunity in that our skills are valuable amid a pandemic.”

While Johnson said she finds career prospects in STEM encouraging, other Pepperdine students reported they feel anxious because of the pandemic’s effects on the job market.

Though the unemployment rate is steadily decreasing, Seaver students said they still fear they will be unable to find work once they graduate.

In a Graphic survey of 78 Pepperdine students and alumni, 81% reported they were nervous or slightly nervous about finding a job post-graduation. Over 40% reported the pandemic had altered their career plans.

While Seaver undergraduates imagine life after graduation, the class of 2020 experiences the COVID-19 job market firsthand.

Elissa Croslin graduated from Pepperdine in May with a Bachelor of Arts degree in Theatre with an emphasis in Acting. Croslin said the pandemic created significant changes for actors, such as self-taped auditions and virtual acting courses. She said she currently takes an online acting class alongside other Theatre graduates from Pepperdine.

Croslin said she initially planned to live in Los Angeles after graduation but decided to move back home with her parents until acting opportunities return to an in-person format.

“It just got to the point where I didn’t feel like it made sense to be in LA if I wasn’t doing what I wanted to do there,” Croslin said. “The whole point of being in that epicenter of acting is there are all these opportunities, and when they’re not there, it’s just not worth paying so much for rent.”

Croslin said most of her friends from Pepperdine also live at home, and her acting friends are pursuing virtual acting opportunities.

“It’s more difficult because you’re not really able to do what you’re so passionate about in the way you’re used to doing it,” Croslin said. “So I think the definition of acting — or just being an actor, really — is shifting for so many of us.”

While Croslin said her time at home has been difficult, she also said she has been able to reflect on what it means to be an actress.

“It’s such an important time for actors to reflect and think about, ‘What are we doing this for? What kind of actor do we want to be?’” Croslin said. “Those are the questions I think all of us have, but we’re really getting to look at them right now.”

Croslin said she feels like the past seven months revealed to society the importance of the arts because people are at home consuming more media than ever before.

“I think it’s an inspiring time for people who are not always supportive because they’re seeing the arts be something that’s fuel and passion and excitement,” Croslin said.

Croslin and Johnson said they are both thankful for opportunities to reflect and grow during this time.

“I think if you’re staying safe and you’re finding ways to dig into that creativity, then that’s what matters,” Croslin said.