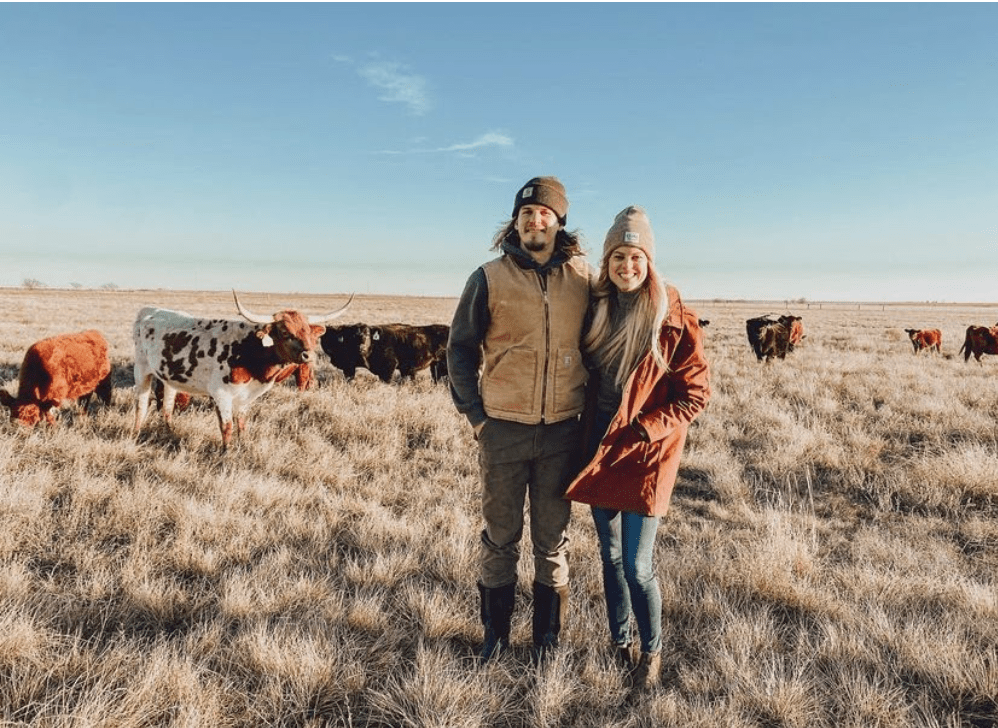 Zach and Kacie Scherler-Abney on their farm, Re:Farm, in Lawton, Oklahoma. Kacie graduated from Pepperdine in 2013 and again in 2016 from the Graduate School of Education and Psychology.

Kacie Scherler was a vegetarian on-and-off for 10 years, but when she was diagnosed with a rare autoimmune disease, the only diet that could heal her required her to eat animal meat — and she had to raise it herself.

Now the founders of Re:Farm, Scherler and her husband look to regenerative farming as a means to produce beef in a way that benefits human health and the environment.

Scherler, a Pepperdine alumna, grew up on her family’s farm and ranch in Oklahoma and said she had no intentions of moving back home or being involved with food or agriculture.

After marrying her husband Zach Abney in 2018, they decided to renovate a home on her family’s property in Oklahoma and continue working at their jobs remotely. Their goal was to use the fixer-upper as their home base but travel around the country in an Airstream to stay connected with friends and family.

Two months into their marriage, Scherler lost feeling in her lower body and could no longer walk. She was told she had a 30% chance of recovering from her autoimmune diagnosis. The couple’s dream crumbled.

Originally diagnosed with Multiple Sclerosis, doctors confirmed Scherler’s condition to be MOG Antibody Disease in April 2019. She dove into research and stumbled upon a diet called the Autoimmune Protocol, which eliminates triggering foods for people with autoimmune diseases such as food chemicals and additives, commonly found in conventionally raised beef. Under this diet, Scherler discovered clean meats would be integral to regaining her mobility.

Confined to their new home in Oklahoma, the couple did not have access to the grass-fed and finished beef — clean meat — Scherler needed. Living on the family farm and ranch, however, they did have access to a grass pasture. They decided to raise the meat themselves, which allowed them to have full control over the process, Scherler said.

“I was kind of disgusted by this idea of the bulk of my diet being clean meat, and at this point too, I wasn’t aware that there was any sort of meat production that could be good for the planet,” Scherler said.

The couple’s farm, aptly named Re:Farm, was born out of a personal health need for clean, grass-fed meat, but has since developed into a commitment to also care for the planet through regenerative farming practices.

The farm’s website claims the farm does this by, “rethinking commercial practices, and returning to a heritage style of farming.”

“We think our products can renew our bodies and in the process redeem the land they were raised on,” according to the website.

A third of global greenhouse gas emissions are attributed to food systems, according to a journal published by Nature Food in 2021, signaling a need to reevaluate the ways that food, especially conventional beef farming and production, affect the environment.

“Not only can meat production be sustainable, but it can actually serve to regenerate the soil,” Scherler said.

Re:Farm’s method of regenerative farming, in simple terms, means it enables cattle to graze in a way that allows the soil to become a carbon sink. Carbon is a prominent greenhouse gas.

Scherler and her husband intentionally rotate their cattle to fresh pastures every day which gives the cows new grass to eat with each rotation.

“Before we colonized America, there were bison and buffalo and longhorns roaming the pasture and they would all travel together as a herd over, you know, thousands of miles — they weren’t staying in one place for a really long time, and so that is what we mimic,” Scherler said.

Instead of eating all of the grass in one pasture, the cows continually move and find new pastures of grass to eat, which enables the roots to grow deeper underground and taller above ground.

“The root growth then creates more above and all of that is pulling carbon down from the sky and eventually into the soil,” Chris Doran, professor of Religion and Sustainability at Pepperdine University, said.

This revelation, that livestock management works to sequester carbon, appears to be held in tension with the majority of scientists agreeing that cows contribute to greenhouse gas emissions through methane production.

The dialogue around environmentally conscious consumers often focuses on cutting out beef products altogether. This logic rings true for conventional farms, but small regenerative farms may offer an alternative for those who wish to consume meat and still care for the planet.

“We don’t argue that everyone should eat meat, we think people should eat less meat, but if you’re eating meat, you need to eat meat that was raised regeneratively,” Scherler said.

Plant-based meat is on the rise, as climate-conscious consumers choose to avoid animal meat. These fake meats offer a way to get the taste of real meat while ditching the fossil fuels and carbon emissions associated with the process of conventional farming. Many people have swapped beef for plant-based alternatives like Impossible Foods and Beyond Meat. These alternatives, however, have their own set of implications.

Microsoft co-Founder Bill Gates, recently acquired large amounts of agricultural land, making him the largest private owner of farmland in America. This land is expected to be used to grow soy for synthetic beef, Scherler said.

Gates invested in both Impossible Foods and Beyond Meat, and, in an interview with MIT Technology Review, he suggested the richest nations should switch to 100% synthetic beef.

These largely soy-based meat alternatives, however, may be a bandage over the larger issue of climate change.

The government subsidizes a limited amount of crops; among these subsidies are monocrops, such as corn, soybeans and wheat.

Beginning in 1929, the U.S. government created agricultural subsidies to support farms affected by the Dust Bowl and the Great Depression. Today, subsidies are still given to farms in an effort to buffer the fluctuation of weather, market prices and other factors that affect agricultural production. These subsidies help to ensure a stable food supply but leave smaller farms that are committed to regenerative farming at a disadvantage.

Humans have consumed animal meat for centuries, but the meat industry has grown increasingly industrialized and unsustainable in response to a growing population. Large-scale farms — ones that use antibiotics and hormones to increase the size of their cows and prevent diseases — have incentives to continue producing meat in this unsustainable and unhealthy way.

“Meat is really, really cheap, maybe cheaper than ever before in human history,” Doran said. “We subsidize it by making the price of corn and soybeans, which are the primary feed options for most cattle, incredibly cheap.”

Large, conventional farms feed their cows grains, and these subsidies help make production significantly cheaper, Doran added. Farms like Scherler’s aren’t supported by the government because of their small size and commitment to sustainable production.

Beyond subsidies, certifications pose an additional monetary barrier for small, regenerative farms. Oftentimes, farms committed to being regenerative and organic don’t have the funds to go through the certification process, so they resort to maximizing their social media presence to tell their story, Doran said.

“We don’t have the luxury of being a part of this ‘agribusiness system’ where we’re benefitting from commodities and insurance and all of this stuff that the government has put in place to protect farmers,” Scherler said. “But through doing that, it has perpetuated this very messed up cycle of food production.”

Not only are subsidized monocrops cheap; they are also unhealthy for the cows and their consumers.

Cows are meant to eat grass, not grains, said Emily Ziedman, a certified nutritionist with a Masters in Nutrition and Ayurvedic Wellness Counselor. When people consume grass-fed beef, “you’re just getting this treasure trove of nutrients from cows that are eating what they should be eating, which is grass,” Ziedman said.

Heart disease has largely been linked to red meat, but this dialogue fails to distinguish between the multitude of farms and production practices that raise and produce red meat.

“If you’re eating red meat, the way we do in this country, where you go and get a 12 ounce steak that’s conventionally farmed, there are antibiotics, there are hormones […] that could set you up for what would look like heart disease,” she said.

How consumers understand the health effects of meat largely has to do with marketing and incentives, Ziedman suggested.

All of these entities work together and rely on each other. If consumers don’t make purchases, the producers are weakened, but if the producers don’t produce what consumers want, then nothing will be eaten.

“Consumers need to be careful in realizing that they aren’t just competing with each other for food, but they are competing with large corporations that are turning their food into a processed good,” Doran said.

Choosing to consume beef that is grass-fed, rotationally grazed, plant-based or choosing to not consume any form of beef — real or fake — all have benefits and drawbacks. For some, beef from a small, local farm may be too expensive or too far away. Not everyone has access to regenerative farms and whole, organic foods.

In an ideal world, Scherler envisions regenerative meat to be available and accessible to everyone.

“Regenerative farms need to be small and localized, and there needs to be one like every 10 miles,” she said.

Doran suggests people re-evaluate how they consume meat and reflect on how meat has previously been viewed in history.

Through reconciling her care for the environment and her new health struggles, Scherler realized that caring for the climate and for human health are inextricably linked.

“I do think it’s possible to feed, and it’s necessary to feed, a growing population by rethinking our food system, prioritizing the planet, prioritizing the soil and recognizing that human health is so integrated with soil health because most people don’t make that connection at all,” Scherler said.