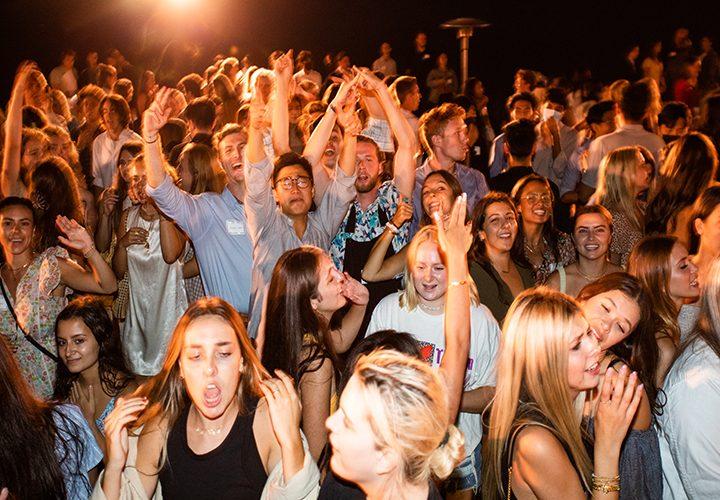 The Class of 2022 dances the night away Sept. 1 at Rock the Brock, sponsored by Seaver Alumni Relations and hosted by President Jim Gash and first lady Joline Gash. The senior class has not been together on campus since their first year at Pepperdine in 2019. Photos by Ryan Brinkman

In a range of interpretations of “business casual” attire — from shorts and a t-shirt to heels and suit jackets — the Class of 2022 arrived in Malibu fashion to Rock the Brock, sponsored by Seaver Alumni Relations and hosted by President Jim Gash and first lady Joline Gash, on Wednesday, Sept. 1.

The annual tradition for the senior class to go to the president’s house at the beginning of the academic year started with President Andrew K. Benton in 2011. The event serves as a book-end celebration in parallel with the senior class’s first-year reception at the Brock House.

The last Rock the Brock occurred in 2019, as the Class of 2021 did not have one because of the COVID-19 pandemic. The Sept. 1 event is also the first time in three years that Rock the Brock was held at the Brock House, due to renovation at the house in 2019.

The event involved many raffle prizes — including a total of $10,000 worth of Waves of Relief presidential awards and a surfboard with Class of 2022 signatures — as well as music and dancing to the Cupid Shuffle, hors d’oeuvre, one back flip and the Pacific Ocean with a sunset backdrop.

“There’s a lot of people here that I’ve seen and met — or seen in class or seen on Zoom — and it’s a lot, but encompassing all that is it’s just good to be here,” senior Daniel Lopez said. “It really is good to be back.”

Many students of the Class of 2022 expressed how “weird” it felt to be with their whole class again and also be around fellow classmates they recognize and others they have yet to meet in person. The last time the entire class was on campus was spring 2019, due to a large portion studying abroad their sophomore year and living in different places during the COVID-19 pandemic.

Senior Francis Mejia went abroad to Shanghai her sophomore year and stayed home with her family during her junior year. At the event, Mejia said she felt a little nervous because she wasn’t accustomed to being around so many people again.

“It’s just like time passes so quickly — but then, because we were away for so long, it’s weird being back here,” Mejia said.

When addressing the senior class, both Matt Ebeling, executive director of Alumni Relations, and Jim Gash acknowledged the challenging journey students have experienced to get to their senior year.

“Tonight is all about you,” Ebeling said. “It’s about your journey at Pepperdine, and my goodness, what a journey it’s been. You’ve been through a lot, and we’re just glad that you get to finish your Pepperdine experience here as students and seniors together on campus.”

Joline Gash said she was glad to be at Rock the Brock not only as the first lady of Pepperdine but also as a mom, because the Gashs’ daughter, Jennifer Gash, is also part of the soon-to-be graduating class.

Throughout the night, Ebeling announced the winners of many raffle prizes such as a surfboard signed by the Class of 2022, Apple AirPods, a Bluetooth speaker and various goodie bags and gift cards. Four seniors also won scholarship money, Waves of Relief presidential awards, between $1,000 to $5,000.

“I feel like a winner,” said senior Isabella Hamm, winner of the surfboard.

Senior Karl Winter, who is also the digital editor at the Graphic, won the biggest Waves of Relief award of $5,000; however, it was an especially lucky win as another name was announced the winner at first, but because the student was not there at the time of the announcement, Ebeling drew another name, which happened to be Winter’s.

“It’s so exciting to be back with some people we haven’t seen since freshman year and just have our class together one last time and throw it back to our freshman year ‘My Tie’ — kind of feels like that again, doesn’t feel like too long ago,” Winter said. “And to win five grand was pretty exciting — that’s all I can say. Shout out to the guy who didn’t show up. I feel sorry for him.” 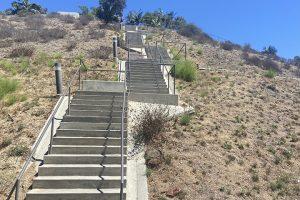 The Firestone Fieldhouse stairs appear daunting from the bottom leading to Lower Dorm Road. The stairs might be scary to look...
Copyright 2013 Jupiter Premium Magazine Theme
Back to top