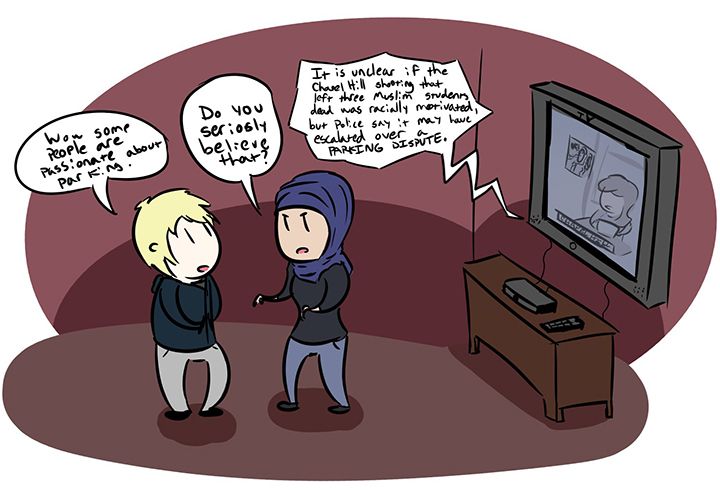 Editors note: due to a procedural error, this story was written on January 19, 2015 but not published until recently. We apologize for any confusion.

The public outcry surrounding what President Barack Obama dubbed “brutal and outrageous [killings]” is a motley crew of shattered assumptions and double standards. It typifies a narrative that, through its human and political tragedy, forces into being our own stale hypocrisies and revisionist tendencies.

At 5:11 p.m. on Tuesday, Feb. 10, police responded to calls reporting gunshots in the area of Summerwalk Circle in Chapel Hill, N.C. All three victims were pronounced dead at the scene.

The three victims were Deah Barakat, 23, his wife Yusor Abu-Salha, 21, and her sister Razan Abu-Salha, 19.

Barakat was a second-year student at the University of North Carolina’s graduate school of dentistry, where his wife was recently admitted, according to an ABC News article “Chapel Hill Victims Were Honors Students Who Volunteered to Serve” written by Dan Good and Susana Kim. The newlyweds were described by friends as ideal students from well-educated families, according to The New York Times. They were known throughout their community for their role as founding team members of United Muslim Relief’s community chapter, according to the United Muslim Relief organization.

Barakat, of Syrian descent, was involved in “Project Refugee Smiles.” His final Facebook post demonstrated his commitment to service, posting a photo on Jan. 29 with the caption: “Tonight we provided free dental supplies and food to over 75 homeless people in downtown Durham! #DowntownSmiles.”

Yusor, a recent North Carolina State University graduate, studied human biology. In a StoryCorps interview last summer, she described her American upbringing as “such a blessing.” Often, Yusor felt conspicuous wearing a hijab in public, but she said she felt embedded in the fabric of American culture by saying, “And that’s the beautiful thing here is that it doesn’t matter where you come from,” according to the Washington Post article “‘We’re all one’: Chapel Hill shooting victim’s heartbreaking StoryCorps Interview,” written by Sarah Kaplan.

Razan was a sophomore student at North Carolina State University, studying environmental design and architecture. Acclaimed for her artistic talents, on Jan. 29 she won UNC’s weekly #ThinkAndDo competition. Her winning concept was a time-lapse video of her abstract 3D model making.

Craig Stephen Hicks, 46, turned himself in the following day and is detained in Durham County Jail. He is charged with three counts of first-degree murder, being held without bond.

Hicks has a penchant for posting controversial posts on Facebook of his disdain for organized religion. An unapologetic atheist, who claimed to “hate Islam just as much as Christianity, but they have the right to worship in this country just as much as any others do.”

It is striking how unique and rare it is to consider this viewpoint — how staggeringly rare it is to see in the media a Muslim protagonist; to hear in the national discourse the tale of the blind aggression of white America against moderate Islam; to purge from ourselves the bias of fear and polar warfare.

Already we see the swirling discourse: How do we talk about this? Is it a hate crime? What does “terrorist” really mean? In what way is the atheist community just like any other faith community? Why do we portray victimhood differently when it’s behind a hijab? Does the world need another martyr? Where do we go from here?

While we surely wish all deaths were treated equally — that any senseless killing could capture the nation’s attention in such a profound way — this one is different. This killing in particular brings forth collective anxiety and elicits something more.

One could argue, for instance, that it challenges the notion that the atheist community is exempt from the moral dysfunctions that apply to everyone else. It forces white America to confront its double standards and presuppositions. It gives face to the misdeeds carried out against Muslim-Americans.

In all this tragedy and analysis, there are takeaways even for those in Malibu, California: Everybody fights against the stereotypes and standards of their culture. It is therefore imperative to take advantage of senseless tragedies like the killings of Chapel Hill to reevaluate our own intolerances and double standards. More than that, we appeal to Pepperdine’s mission of inclusion and our shared narrative as we seek to learn each other’s stories. Most of the world’s violence could be avoided if we treated the people around us like human beings.

As it stands, the Chapel Hill Police Department claims the murders were the result of an ongoing dispute over a parking space. The families of the victims believe it was a hate crime. More than either of those interpretations, the conflict rose from a lack of communication and a chronic lack of human empathy. Do not allow the dust to settle on this empathy, so that we can maintain and shape the legacy of this terrible event. 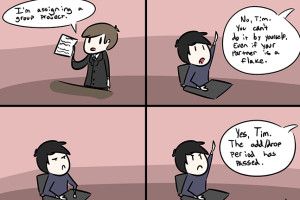 Editors note: due to a procedural error, this story was written on February 12, 2015 but not published until recently. We apologize...
Copyright 2013 Jupiter Premium Magazine Theme
Back to top