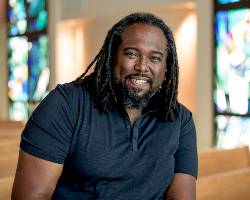 Eric Wilson, associate chaplain for the Office of the Chaplain, kicked off a three-part convocation series with a ‘Panel on Faith’ on March 22 in Elkins.

This three-part convocation series is put on in conjunction with the Center for Faith and Learning. Each convocation will feature a book, with themes related to faith and learning, written by Pepperdine faculty or staff. At the event, Wilson spoke about his recent book, ‘Faith: The First Seven Lessons’, and then held a panel discussion.

The Center for Faith and Learning, in conjunction with the Office of the Chaplain, is hosting a three-part convocation series that will feature some of Pepperdine’s faculty authors.

“We hope that students will learn about and be inspired by the work that is being done by our faculty and staff at Pepperdine,” Stephanie Cupp, program coordinator at the Center for Faith and Learning, said. “We have so many dedicated, talented people who are researching and writing and it’s great to hear form these experts in their fields especially about the ways that their own faith informs their work.”

At the event, Wilson spoke about his book, which was published last September.

“Basically I wanted to investigate why one person can grow in the same environment while someone else can’t, and I found that the people that are thriving possess even things that they have that those other people did not possess: There are seven lessons that they learned that the others didn’t,” Wilson said. “I started writing these notes of these seven things that everybody could learn for their own growth and development.”

David Lemley, assistant professor of Religion at Pepperdine, and Osharye Hagood, Owner of iCoachLives Life Coaching, were invited to participate in a panel discussion at the event.

“I love how this book puts the work of spiritual growth in the context of cleaning the kitchen, being in a coffee shop, or a theater stage and how all of these things become a part of the process of God forming us as we begin to look for how he’s at work in this process,” Lemley said.

Hagood shared her excitement and appreciation for Wilson’s book as well.

“One of the things that I’m always hammering home for my children and my children in the faith is that Christianity is not work—believing is the work,” Hagood said. “That’s basically what he starts with and then he begins to add all of these things that are going to help you on your journey with faith and I was blown away that God was speaking this same message through Eric in his book.”

Senior Blake Somsen said he attended the event for convo credit but appreciated the discussion.

“I appreciate that Eric mentioned that regardless of whatever reason we had for showing up, he was happy that we were there,” Somsen said. “Even though I wasn’t there for the discussion, I felt very comfortable and actually found the discussion pretty insightful.”

Sophomore Alex Ksajikian is in the process of reading Wilson’s book.

“Coming to the event I was worried that I might hear some spoilers, but I really enjoyed it and it encouraged me to continue to read his book,” Ksajikian said. “I’ve heard Wilson speak on several occasions since I’ve come to Pepperdine so when a friend told me he had written a book I thought it would be interesting to see what it was about.”

Professors Cindy Miller-Perrin and Elizabeth Krumrei Mancuso will speak at the second panel discussion of this convo series on March 29 in Elkins at 7p.m., on their new book ‘Faith From a Positive Psychology Perspective’.

Cupp shared what she hopes students will get out of the convocation series.

“Hopefully a spark or seed will be planted into the minds and hearts of students that will help them follow their own unique calling,” Cupp said. “I also hope they will see examples of dedication and perseverance in the pursuit of knowledge, which might inspire them as they pursue their own fields of study.” 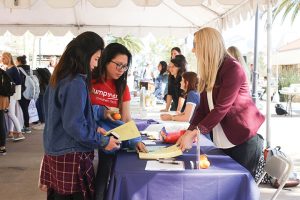