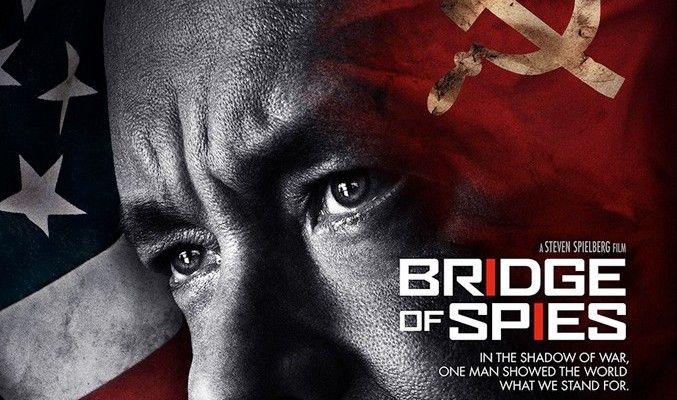 It’s no shocker that Steven Spielberg’s latest sensation “Bridge of Spies” is in the 90th percentile on Rotten Tomatoes. Engaging from start to finish — no small feat for a 2 1/2 hour historical film — the movie is based on a true story of the exchange between a Russian spy and a captured U.S. pilot in 1957. Set in the era of Elvis, Sputnik and the Red Scare, “Bridge of Spies” paints a fresh picture of the tensions between the U.S. and the Soviets, challenging our post-conceived notions of the Cold War.

Starring Tom Hanks as New York lawyer James B. Donovan and Mark Rylance as Russian captive Rudolf Abel, “Bridge of Spies” sheds light on shadows cast by the Iron Curtain. When Abel is arrested for suspected espionage in Brooklyn, Donovan takes the case as his defense attorney, much to the chagrin of fellow New Yorkers and even his wife (played by Amy Ryan, though perhaps better known as Holly Flax from “The Office”). Donovan is asked, “You aren’t a communist, so why are you defending one?”

When the Soviets capture U.S. pilot Francis Gary Powers, played by Austin Stowell, Donovan is asked to oversee negotiations for the exchange of prisoners in East Berlin. His health, family and social standing take the back burner as Donovan holds true to his words at the beginning of the film: “Everyone deserves defense. Everybody matters” — pretty progressive stuff for the ’50s if you ask me.

The story hits a personal note with Spielberg, whose father flew to Russia with General Electric right after Powers was taken captive. However, Spielberg said in a conference call that it was U.K. playwright Matt Sherman who found the story.

“I never heard of Donovan or Abel,” Spielberg said. “I knew about Gary Powers. I knew nothing about the spy swap … or what was happening during this almost secret history of the KGB versus the CIA in those days. This writer from England brought me the story, and it took an English writer to wake an American up about a purely American story.”

The first hour or so of the movie exemplifies the idealized swank of the mid-20th century. There’s a certain kind of poshness that only Disney can master (if you’ve been to any of the Disney Parks, you know what I’m talking about), and the classy wardrobe, soft jazz piano playing in the background, warm lighting and rich colors draw upon an iconic coziness often associated with the age of the nuclear family. Even some of the most frequented movie cliches (fade-in scenes, a spy under a streetlamp in the rain and a fedora or a soldier taking out a black-and-white photo of his sweetheart) give a feeling of nostalgia rather than of cheesiness in this film — like old Coca-Cola posters, perhaps.

Halfway through the movie, we’re presented with the stark contrast of East Berlin, where an icy winter, disorder in the streets and an ever-gray sky perpetuate. Spielberg said they used the color palate to enhance the points of view.

“When the film evolves into a story that takes place behind the Iron Curtain, most notably in East Berlin, we went for grays and blues and greens … as opposed to the warmer constant lighting that we used inside law offices or natural white sunlight that we used … in the courtroom scenes in America,” Spielberg said.

“Bridge of Spies” is Hanks’ and Spielberg’s fourth film together, though Spielberg said they were good friends before forming a professional relationship. He said working with Hanks on “Bridge of Spies” was one of the happiest experiences he’s ever had.

“… it’s simply because Tom is an honest actor, which means that he doesn’t have to act,” Spielberg said. “When Tom knows a character, he becomes that person.”

And really, is there any living actor that feels more American than Tom Hanks? From rescuing Lieutenant Dan in “Forest Gump” to his role in “Saving Mr. Banks” as Walt Disney, Hanks has earned the trust of his audience over the decades. His portrayal of Donovan is likewise natural and convincing — in fact, I’d hire him as my lawyer any day. Though Donovan is easily identified as the film’s knight in shining armor, Spielberg said forging heroes is not the goal when working with historical stories.

“It’s my job to be accurate to the event, even when we sometimes fictionalize some of the drama,” Spielberg said. “When that happens, I don’t really think about Donovan or Schindler or Lincoln as my hero. I think of them as people I can learn something from, but I’m really happy to hear if any of those characters become the heroes of others.”

Though the Cold War is long since past, Spielberg said a lot of things about the movie are relevant today.

“The movie is about spy craft,” Spielberg said. “It’s about the art of conversation, the art of negotiation, but it’s also about spying and today there’s tons of things going on. In the 50s, we flew U-2s over [the] Soviet Union and today we’re flying drones everywhere. We were spying on each other all through the 50s and 60s, and today we have a great deal of cyber hacking which is a form of espionage.”

The character of Abel — the mysterious Russian spy who also feels a lot like a lovable, grandpa figure — is never fully disclosed. The audience is left to wonder if he’s really guilty, if he really did commit acts against the U.S. But maybe that’s the point — that just because we don’t know everything about a foreigner, doesn’t mean we can retract their basic human rights. “Bridge of Spies” reminds us that even though the Berlin Wall was torn down 26 years ago, there are still lessons to be found in its rubble.

“I just find that Donovan, the real James Donovan, played very authentically by Tom Hanks is a great example of what we need more of today,” Spielberg said. “Not only in the diplomatic world, but on Capitol Hill and just the way people would be, should be more patient with each other in trying to figure out or trying to celebrate what makes us different, and not being so quick to judge someone who is not the same as us.”

The movie was released Oct. 16 and is playing in most theaters. For a chance to win a free movie ticket, share this story with the hashtag #PeppGraphicReviews on Twitter by Nov. 1.