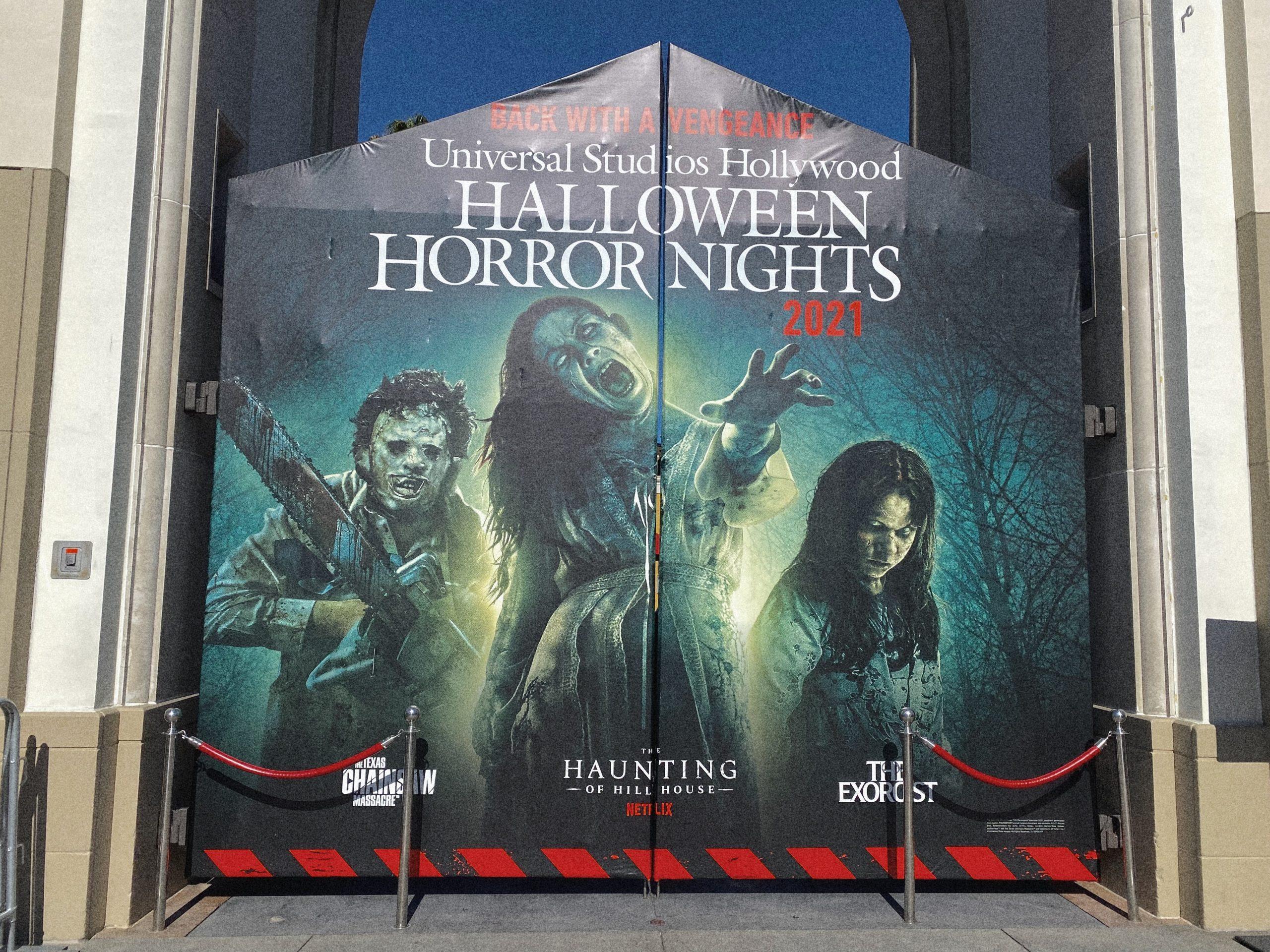 The official poster for Horror Nights 2021 sits tall as a photo opportunity before guests enter Universal Studios Hollywood. I experienced some of the theme park in the daytime on Oct. 17, before the ghosts and monsters made their 6 p.m. appearance.

Attending Universal Studios Halloween Horror Nights has been a tradition of mine for a few years — the thrill of running and screaming while my favorite movie monsters scare me has always been enamoring for some reason. I was especially drawn in when they had a “Stranger Things” maze in 2018, and I convinced all my friends to go because it is my favorite show.

Horror Nights has been around since the late ’90s and runs for the month of October, with Halloween night being the hardest ticket to reserve. Universal decided to go all out this year after canceling Horror Nights 2020, and I couldn’t be happier I made it for the comeback.

This year’s mazes included “The Texas ChainSaw Massacre,” Netflix’s “The Haunting of Hill House,” a Universal original “The Curse of Pandora’s Box,” “The Exorcist” and more.

They also have shows such as Jabbawockeez dance group — which I enjoyed due to Michael Jackson’s “Pretty Young Thing” being on the setlist. Universal also had Scream Queens — featuring classic female monsters such as the Bride of Frankenstein — and more.

As I walked in the park entrance through the Halloween fog, I could already see the actors coming toward me, one with a blue mask that leered over me for almost two minutes before my cousin decided to tell me — I guess she wanted to hear the scream, and I can’t blame her.

I weaved my way through the crowd navigated by glow in the dark wristbands moving about in the dark almost as if they were floating.

As I walk through “Springfield” sneaking a few bites of my “spider web” chocolate cupcake, I heard the music playing specific to the “The Simpsons” Halloween episodes, the details continuing to amaze me. Oh and of course, my own screams ringing through every maze — let’s be honest, they were the loudest of them all.

As I made my way through the “The Texas Chainsaw Massacre,” maze I clutched my cousin’s arm so tight she’s laughing. I am also holding onto my half-drank Coca-Cola — I purchased this not because I was thirsty, but because I wanted a safety net to hold onto during the duration of each maze.

As we make our way down the famous Universal escalators, we hopped on the Terror Tram — “The Forever Purge” is this year’s theme. The tram takes visitors along for a short, peaceful ride then drops everyone off in front of the famous filming location for Hitchcock’s “Psycho.” The park’s monsters wait to scare us as we walk throughout the hotel, particularly ones with faux chainsaws — it’s easy to sense them coming as I inhale the smoke.

“The Haunting of Hill House” maze is my favorite. As a fan of the show, I couldn’t believe I actually found myself standing in the “red room,” known for where Olivia Crane attempted to poison her kids.

The reflective light behind the windows shows ghosts behind the walls instead of reaching toward us. I was caught off guard when I had to catch the boy in front of me after he fell backwards due to a horrifying jump scare — we followed up after, shared a laugh and became friends.

After the night came to a close and we shopped for merchandise — a stuffed animal for myself as per usual — I was thinking about my night.

I noticed that according to my sixth sense, it’s safe to say I did see dead people.