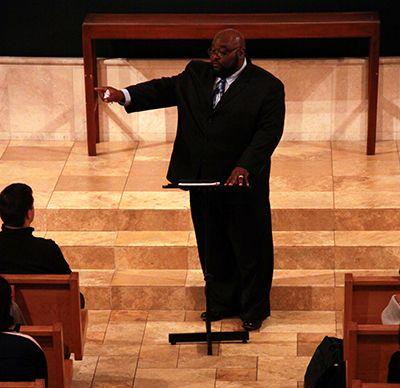 Every pew in Stauffer Chapel was packed with students on Tuesday, Jan. 21 to commemorate the life and legacy of Martin Luther King Jr. Along with celebrating the Civil Rights Movement and the push for equality, Bishop Darrell L. Bush, a prison chaplain for more than 20 years in LA County, shared his personal story of finding freedom.

“I want to talk to you tonight about justice,” Bush said. “It was God who saved me, but it was the system that straightened me out.”

Bush explained that for years he lived against the law, getting involved in crimes varying from selling cocaine to attempting murder.

“I’ve been arrested over 21 times,” Bush said. “But God is a deliverer. I must have looked like a fool. I wore 30 chains, looking like Mr. T. I had 400 locks on my door thinking that would keep people out.”

After being wrongly accused for a crime and once again incarcerated, Bush called out to God for the first time.

“I didn’t know how to pray,” Bush said. “I just yelled, ‘Help me, Jesus, get [me] out of this situation here!’ I finally realized that Jesus was using the system to get my attention, because He couldn’t get my attention when I was out on the streets living like a playboy. I thank God for the justice system.”

Since he turned his life around, Bush said he has served as a minister of the gospel for 25 years, preaching — from the other side of the iron bars — to the convicts.

“The MLK chapel was a unique way to show honor to a man who changed our history,” freshman Michael Veloz said. “The speaker really helped me put King’s legacy into perspective.”

Bush said that if it wasn’t for Martin Luther King Jr., he wouldn’t have had the opportunity to speak at Pepperdine.

“He broke down racial barriers between the people,” Bush said. “But in order for something to be great, some people have to die. I had to die to myself when I gave my life to Christ. Dr. King gave us this opportunity for equality, and it’s up to us to seize the moment.” 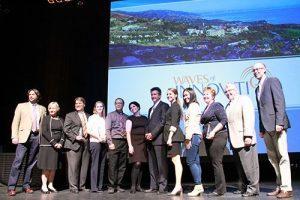 Photo by Katrina Kirsch With just over a week since the first Waves of Innovation grants were awarded, the finalists face...
Copyright 2013 Jupiter Premium Magazine Theme
Back to top