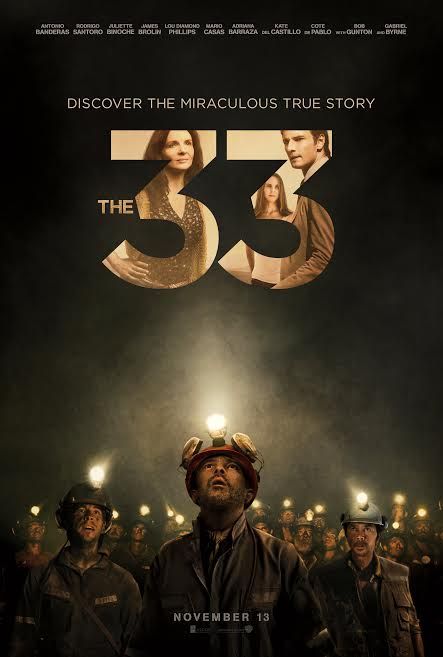 Movies focusing on real-life disasters are fascinating because they affirm the durability of human creativity and the human spirit, and because they serve as lessons in how to avoid similar disasters in the future. Films like these may be predictable and stale to some, but if executed well, they can be intense, and even moving. How does “The 33” fare in this regard?

In August 2010, a copper-gold mine in Chile imploded, with 33 miners trapped more than 2,000 feet underground. Taking place over the course of 69 days, the film takes two approaches: One focuses on the miners’ attempts to stay alive amid food and water shortages, along with claustrophobia and intense heat, while the other approach focuses on the rescue teams’ efforts to locate and extract all of the miners as quickly and carefully as possible.

Based on the book “Deep Down Dark” by Hector Tobar, the film is directed by Patricia Riggen and written by four writers — Mikko Alanne, “Dallas Buyers Club”’s Craig Borten, “The Devil Double”’s Michael Thomas and “The Motorcycle Diarie”‘s Jose Rivera. This is also one of the last films James Horner composed for before his untimely death this past June.

Describing the film would require splitting into two halves. The first half is great, as it both sets the stage for the disaster to come, and how the miners cope with their life-or-death situation. The first few minutes establish subplots for the characters, then almost immediately rushes into the mine’s collapse. Despite the rush, Riggen makes the emotion palpable amidst the chaos. The cave-in stops almost as fast as its starts, the miners immediately scramble to survive. This is the part of the movie that shines brightest- the tensions between the characters in the mine escalate over their limited supplies, their multiple failed escape attempts, and the struggle to maintain their comradery. On the surface, the miners’ families, the Chilean government, and international engineers clash over how to get to the miners without killing them in the process. It is just as gripping as the miners’ own struggles primarily because of the situations’ contrasts.

Once the second act commences, the films slows down and one might get the feeling that this part of the films feels both hollow and unnecessary. Whereas the first half covered the first seventeen days leading up to eventual location of the miners, this half focuses on the 42 days where the surface rescue crews try to extract them without compromising the unstable geology surrounding them. When the supply and communication lines are established between the surface and the miners’ refuge, all sense of tension is lost, turning what remains of the story into a waiting game. Whatever subplots were established early on end up feeling stunted and flat due to their predictability.

Despite a formulaic approach to the story and the characters, “The 33” nonetheless nobly demonstrates the creativity of humans in crisis. Those who have actually borne witness to the event may find some of the material redundant. Those who didn’t will find this a good foundation where they can proceed to do research on it at some later point. Wherever one might stand in the context of how much they know, the film is at least worth watching just to see how one might survive in such a dire situation. To paraphrase one of the film’s lines, “I believe we will survive because I choose to believe it.”