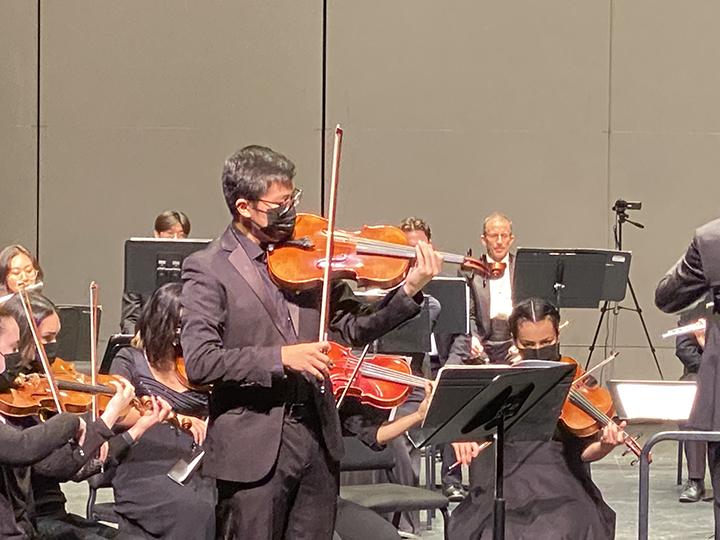 The heat was on for the Pepperdine Orchestra, as they put their skills to the test, hoping their month’s worth of rehearsals would help them provide the audience with a memorable show.

Teamed up with two-time winners of the Thomas M. Osborne Concerto Competition, Jonathan Vu and Samuel Sun, the ensemble gave a powerful performance, showing both the students’ hard work and the staff’s dedication.

The night of Sept. 30 marked the beginning of a new chapter for the Pepperdine Orchestra, as they returned to Smothers Theatre to perform Beethoven’s 5th Symphony after a year and a half of both practicing and performing online.

Crowds of people flooded Smothers Theatre, fighting through the hot winds and dry weather to support the performers. Many guests came to support, cheering like fans in a football stadium as each song came to a close.

While the attendees prepared to hear a tranquil night of classical music, the performers’ anxieties swelled moments before the beginning of the concert.

Tensions were high, as Assistant Music Professor and Conductor Pierre Tang said he did not know what to expect given that many factors proved to be detrimental during the orchestra’s rehearsals.

“There were just a lot of challenges we didn’t know about until we started rehearsing,” Tang said. “A lot of humidity would produce small cracks and the heat would also change the intonation of the instruments.”

But it was not only the harsh elements of nature that stood in the way of the performers — but the change from online to in-person as well.

“I think the biggest challenge was just that [switching to in-person practice] because the first couple rehearsals were just feeling, playing with one another again,” Tang said.

Sophomore cellist Katherine Delong said there is more energy when performing in front of a crowd than online, which makes playing each song more meaningful to each musician.

“When you get that live feedback, it’s really difficult to get the reaction of the audience and there’s just so much more energy when you’re in person,” Delong said.

The practice she received helped her the most when preparing for the show, as it allowed her to relish in the moment and not let her nerves get the best of her.

“It’s just going out there and just wanting to produce something great,” Delong said.

When asked about the transition to in-person performing, Sun agreed.

Sun, a Pepperdine alumnus (’21) and one of the featuring soloists in the concert, won the Thomas M. Osborne Concerto Competition twice in a row and was inducted into the Pi Kappa Lambda National Music Honors Society earlier this year. He serves as the mentor and music coach for the Palo Alto Chamber Orchestra as well as the Concertmaster and Principal Violinist of the Homestead High School Orchestra.

“It’s super different, all of you feed[s] off the energy of the audience since that’s what drives you as a performer,” Sun said. “Performing to a video camera or screens is not the same as live performances.”

Sun’s biggest takeaway from the show came from how much more enjoyable he finds performing in person again. It was refreshing to be able to hear the instruments together in one space — versus playing separately online, he said.

Although times were tough for the orchestra during rehearsals, its inaugural performance resulted in overall satisfaction among the audience.

Audience members across the Pepperdine community listened to an hour of classical music, taking pictures of their loved ones and watching the two soloists embrace the harmony around them.

Standing ovations filled the theater, as audience members lauded the performers, handing out roses and bouquets to them after the show. After long hours of hard work and dedication, the Orchestra delivered a powerhouse performance.

“Overall, [it was] better than I thought — it was really above what I was rehearsing,” Tang said.

The orchestra’s next performance would be with the New West Symphony, as the company has invited the string section to perform with them at Smothers Theatre.