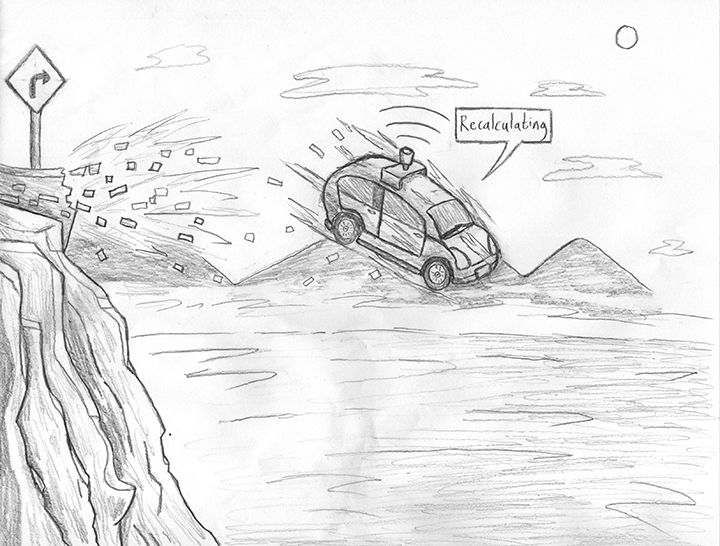 Science fiction films often depict technology advancing to a point where we can’t control it, and it instead controls us. “Terminator,” “The Matrix” and “I, Robot” are a few famous examples of humanity becoming subservient to technology’s machinations. So far it hasn’t happened; we’re still in control of the machines that make our lives easier.

But something from science fiction is coming our way, and it’s not a muscly robot Arnold Schwarzenegger threatening us with, “I’ll be back.” It comes on four wheels and is the most important piece of American transportation: the automobile.

In the automobiles section of any news website, one can find hundreds of articles on the recent efforts of many CEOs and their companies to engineer autonomous, or self-driving, cars that will take us anywhere and will do so quickly, economically and safely.

According to Zack Kanter in his article on Jan. 27, “How Uber’s Autonomous Cars Will Destroy 10 Million Jobs and Reshape the Economy by 2025,” for CBS Bay Area, the main carmakers are in the game as well, and many new vehicles include technology like “assisted cruise control” or accident-avoidance technology, both of which let the car take control and brake or speed up with traffic as it senses it. Elon Musk has made his 2015 Teslas able to drive themselves “90 percent of the time.”

It’s an enormous risk placing our trust in technology that could easily glitch and cause a four-car pileup in an intersection, or send the sleeping passenger off a cliff because of misread map data. These are worst-case scenarios, but how many crashes will it take for this technology to be consistently safe enough before we deem it safe for our children?

In an article by Frederic Lardinois on Jan. 18 called “Autonomous Cars Are Closer Than You Think,” for TechCrunch, Ford’s CEO said, “In the next five years, you’ll see somebody introduce autonomous vehicles,” which seems remarkably fast for such complex technology. But the true barrier to making autonomous vehicles marketable is their safety. Are they really smart enough to avoid accidents? If they’re not, people won’t buy them.

Legislation will also have to change for these vehicles to be given full control on roadways. If two autonomous vehicles crash, who is to blame? The drivers? That will be up to us to vote on in the future.

Elon Musk told writer Eric Mack in his Oct. 14, 2014 article, “Elon Musk: Don’t fall asleep at the wheel for another 5 years” for Cnet, “five or six years from now I think we’ll be able to achieve true autonomous driving,” which is what car companies really want and will turn an incredible piece of technology into another convenience (think Keurig for cars).

In a special report called “Look, no hands,” for The Economist, the writers said driverless cars will allow parents to send their children to school, permit teenagers to travel without need of a license; instead of paying insurance to assist us when we crash a vehicle, it would protect us when the computer-controlled vehicles crashed. Life would become much easier and cheaper, but faster, too.

Imagine, in the next five years we could be driven by cars to our meetings or to our vacation spots, and all we need to do is get in. Whatever we were doing before we were in the car could come with us. TV, homework and business could still be connected to us even though we’re out of the home. But this full-time connected lifestyle could prove to be detrimental to our relationships with others.

Technology has already given us new methods of ignoring the person next to us, to stay on our phones and not interact. Driverless cars could become another venue for that, and suddenly, our conception of travel changes. It no longer matters the journey we take nor the things we see, but how fast we can get there.

Driving, for me, is incredibly fun and such a great way to explore our world. I wouldn’t want that ever taken from me, and it would be my hope that automakers do not totally eliminate manual driving. Not all agree with me, however; companies like Uber want to have full fleets of autonomous cars, where they do not have to pay for millions of drivers, which will eliminate millions of jobs, according to Zack Kanter’s article above. Where would all these drivers go?

I believe that this new technology will be beneficial to our society, but it’s not something we should rush into before we understand its implications. Autonomous vehicles, no matter their efficiency, could create a deeper separation between individuals and the world we live in, and could cost millions their livelihoods.

The idea of cars driving us is strange, too. It gives power to the car to decide where to go and how fast in that we essentially place our total free will in the hands of nuts and bolts — something we’re not ready to do.