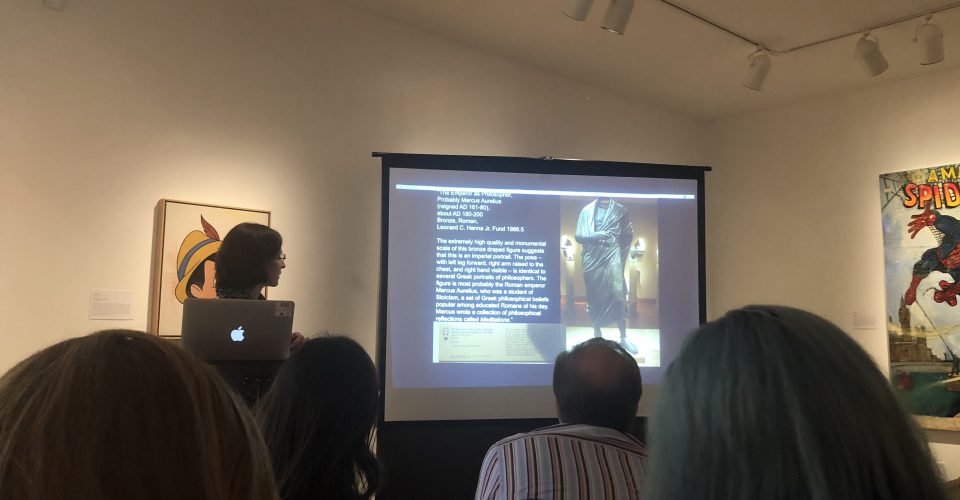 The Art History Lecture Series commenced Thursday in the Weisman Museum with Elizabeth Marlowe’s “Why Museums Sometimes Lie,” which examined the complex role of the museum and art market, including their ethical dimensions over time and in the 21st century.

Marlowe, a professor at Colgate University, began her lecture with a brief review of antiquities collecting that became the driving force behind museums. Marlowe said this kind of collecting started in the 18th century when wealthy tourists and colonial powers would acquire whatever they wanted. A famous example of this is the infamous Elgin Marbles that the British Museum in London now houses.

Marlowe pointed out one of the central problems plaguing the art market and museum realm today: the buying and selling of objects with unknown origins.

“The less that is known about where these objects come from, the easier it is to sell on the market,” Marlowe said.

After World War II there was an increased awareness of protecting cultural property which led to international laws such as those presented at the 1970 UNESCO Convention, which prohibited and prevented the illicit import, expatriation and transfer of ownership of cultural property, according to Marlowe. As such, signatories agreed to respect each other’s cultural property laws.

The options for museums and collectors, Marlowe said, are the following courses of action: Acquire objects that were exported before 1970 and acquire objects whose country of origin is unknown.

Freshman Amanda Huang said she was amazed to learn about these laws prohibiting the illicit import, export and transfer of cultural property. Reflecting on the looting and illegal activities done to these artworks, Huang expressed her disapproval.

“I believe that this is an immoral behavior to the artwork,” Huang said.

Marlowe cited numerous examples, including the Eagle bronze at The Getty Villa acquired in 1972, that might be categorized as “ungrounded objects.” Ungrounded objects are those that are lacking a known place of discovery or find spot.

Without a sound provenance, valuable meaning about these objects may be lost.

“These objects derive meaning from the context and the objects around them,” Marlowe said.

Removed from their context, the object can appear lifeless and insipid. When married with their historical context — even if it is not entirely known — expressed the object possesses greater meaning, according to Marlowe.

Marlowe said the museum labels of ungrounded objects focus on stylistic and iconographic details rather than historical context. She noted that the labels are used to justify curators’ dating of the objects rather than providing any detailed information about the object. This semantic dance can be noticed by museum-goers when the labels highlight the visual qualities over the historical context and compare the object to others that the viewer may not be able to see.

While knowing more information about these “ungrounded objects” would be beneficial for museum visitors, Marlowe noted that new knowledge about these ungrounded objects’ find spots can be bad news for museums who sometimes try to suppress the find spot deliberately. Marlowe said that acquiring ungrounded antiquities is bad not only because it encourages looting and robs countries of their cultural heritage, but because it forces museums to lie about what they know about these objects. The byproduct of this is vague labels with irrelevant information.

Lydia Parker, a junior Art History major, said Marlowe’s talk gave her a new outlook on the role of museums.

“Dr. Marlowe definitely put a new perspective on how to go about museums,” Parker said. “I’ve grown up going to museums and even more so now that I’m studying Art History, but I realized I never really thought much about the labels I was reading. I always just assumed that museums were the most informed and accurate place to learn about the artworks there.”

Marlowe urged visitors to be critical readers of museum labels, encouraging the next generation of curators, journalists and museum board members, to make vacuous labels a thing of the past.

Parker said that lecture gave her insight into issues plaguing the art world as well as the role of the current generation in ameliorating these problems.

“I’m now more aware than ever of our generation’s responsibility toward a more honest presentation of artifacts as well as the importance of being comfortable enough to question what is presented as facts,” Parker said. 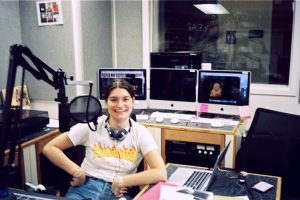 Photo courtesy of Emma CravenThe Smiths’ poster on the wall and The Beatles’ record on the counter are proof...
Copyright 2013 Jupiter Premium Magazine Theme
Back to top