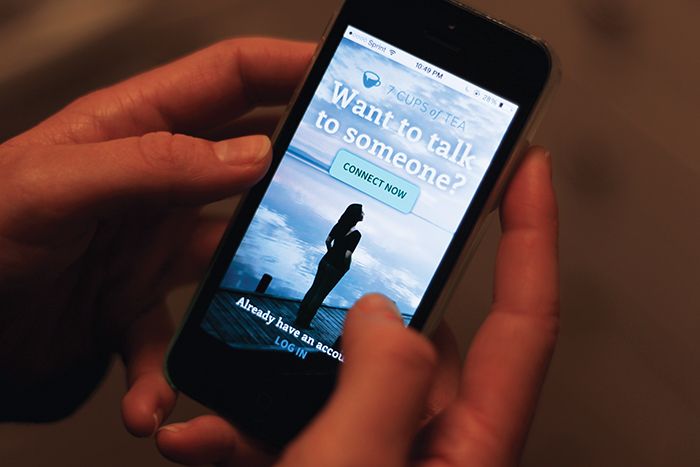 A free app and website, 7 Cups of Tea that facilitates anonymous conversations between trained listeners and users who want to vent about their life, is now working on specifying services to college campuses.

The service aims to provide users with an outlet to voice issues, loneliness or other life struggles. Volunteer listeners message with users via the app or website, and all conversations are confidential and deleted, according to the group’s website. 7cupsoftea.com currently operates globally, offering listeners across 150 countries and providing support in 130 languages according to founder Glen Moriarty.

A college offshoot of the app would provide training for volunteer listeners from each involved institution, Moriarty said. If, for example, Pepperdine were to use the more specified service, trained Pepperdine listeners would be able to converse through messaging, albeit anonymously, with other Pepperdine students.

The app, website and services for colleges are free, but Moriarty wrote in an email that 7 Cups of Tea will offer a premium option in the future.

Users need only to open up the app or website and select “connect now” to be matched with one of 70,000 volunteer listeners across the world. Alternatively, one can choose a listener by country, issue or language.

Before beginning an anonymous chat, users must agree to a statement that they are not homicidal, suicidal or abusing anyone. Users must also be over 18 years old or 13 to 17 years old with a parent’s permission.

All listeners are unpaid volunteers that go through a “fairly robust” training program, according to Moriarty, which includes a video and test-based course, simulated conversations and continued education that offers 242 levels for listeners to move through. The website also offers a selection of self-help guides.

“One of the things that I love about 7 Cups is that it’s really easy for people to get help,” Moriarty said. “It’s anonymous, so nobody knows who you are, which takes away the stigma. It’s not in person, it’s not voice, so it’s really easy to ask for help because it’s just like messaging.”

Branching out to colleges

7 Cups of Tea is just beginning to work more formally with colleges, but 85 percent of current users are young adults, with most being students, Moriarty said.

Sophomore Eti Maka said she is neutral toward the app and not sure if she would actively use it, but sees some merit in the idea.

“I feel like it’s helpful for me, especially because I get lonely and stuff a lot,” she said.

Maka referred to “Behind the Faces,” a student-produced documentary about Pepperdine loneliness that premiered at Reelstories Film Festival this year, as an example of how many students respond to how they feel lonely on campus. She said that she would prefer to message with a Pepperdine student, even if it is anonymous, because they “can understand a lot better than someone from a different culture.”

“I feel like that’s a big issue, just community-wise,” she said. “I feel like it could help build community, kind of anonymously I guess.”

Moriarty said he believes that providing a solution to students who feel they have a lack of support or do not fit in will boost retention rates, in addition to bolstering a school’s culture. He called the situation a “triple win” which could benefit the student seeking help, the school community and the university’s finances.

“It occurred to us: Man, if we could work more formally with schools or even just groups of students in schools, we could support a lot more students,” he said. “The students would thrive, they would do better, we would create a kind of compassionate culture on campus which I think is incredibly important.”

Another tool for combating loneliness at Pepperdine?

Although some at Pepperdine see potential in the app to provide another tool for increasing community and combatting Pepperdine loneliness, others are not sure if creating a Pepperdine-specific branch would be beneficial in the long run.

Counseling Center Director Connie Horton said she appreciates that “they do make the distinction that it’s not therapy.”

She said she thinks that for some people the app may be better than nothing, but that she hopes people will also be able to find face-to-face interactions.

“It’s one thing to text with someone you know and have them listen, but to be texting anonymously, it’s not the same to me,” she said. “It’s not really friendship, and it’s not really therapy, and it’s not pretending to be, so I appreciate there kind of being truth in advertising.”

However, Horton said she recognizes this could possibly be a first step for some, and that “digital natives” who are more accustomed to digital communication may be more comfortable with sharing via the app.

Horton cited a study by UCLA that looked at this year’s freshman class nationally (including Pepperdine’s freshman class), finding that this class reported more mental health concerns and fewer social skills compared to all other years UCLA has conducted the survey.

She said in light of these findings, an app like 7 Cups of Tea might help those who are struggling but do not have the social skills to express themselves, and those who are too busy to make real connections, but she hopes that people won’t settle with only this kind of sharing.

“I think for both groups it might be a first step in (dealing with) the loneliness; whether you’re so busy you forgot to have any authentic conversation with anybody today or whether you’re kind of nervous and don’t know how to express yourself, it could be the first step,” Horton said.

Senior Andre Mangkuningrat said he would not use the app, not because the app itself is not effective but because he would prefer to talk to family or friends about personal issues. He said he does think it could help some:

“If their problems aren’t that specific that people would know who they actually are, then it might work,” he said.

7 Cups of Tea was born of a lightbulb moment Moriarty had while speaking with his wife, who works as a therapist, about a problem.

Moriarty, who is a psychologist, had been researching offline behaviors that moved online when he thought about what people who do not have a therapist or spouse do to resolve life issues.

“It occurred to me: My goodness, this is it,” he said. “The human impulse is to talk to somebody about problems or things that are stressing you out. That behavior hasn’t yet moved online. We should build a service where, if you need to talk, somebody will be there to listen to you. And that’s what we did.”

The name of the app references a Chinese poem of the same name by Lu Tong, which can be found on the 7 Cups of Tea website.

7 Cups of Tea is available for both iOS and Android.