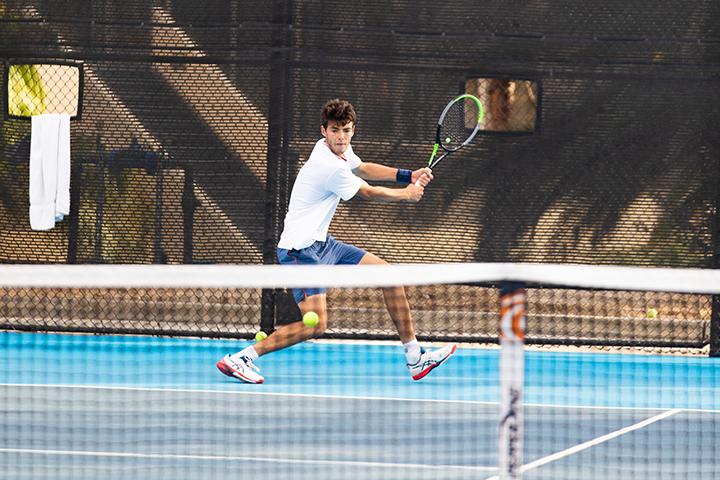 Sophomore Pietro Fellin sets up for a backhand in a match during the ITA Southwest Regional Championship Oct. 22 through Oct. 26 in Malibu. Pepperdine previously hosted the tournament in 2018 and 2019.

While no Pepperdine doubles team made it farther than the quarterfinals, graduate student Andrew Rogers and sophomore Pietro Fellin played in the finals in the 128-player singles draw. Rogers beat Fellin 2-6, 6-0, 6-4 to claim the title.

“You win championships off depth,” Rogers said. “To have two guys from Pepperdine in the final is phenomenal. It really shows our depth, and it shows that we can win at every spot.”

Results of the Tournament

Eight of the nine players on Pepperdine’s roster played in the tournament, the exception being junior Robert Shelton, who is recovering from a hand injury.

“I think when you have a tournament that has the entire team competing individually, it’s always difficult to have one consistent theme,” Head Coach Adam Schaechterle said. “But I think overall, the [tournament] showed how much the boys are developing and the growth we’re making as a team.”

Senior Enrique Rico and junior Eric Hadigian won their first two matches, before falling 8-2 in the Round of 16 to USC’s Bradley Fyre and Peter Makk.

The Pepperdine pairing to find the most success was senior Tim Zeitvogel and senior Corrado Summaria, who won their first three matches 8-0, 8-2 and 8-6, before losing in the quarterfinals to UCLA’s Patrick Zahraj and Giacomo Revelli.

“What was really impressive was how Tim [Zietvogel] and Corrado [Summaria] got their [first] doubles match done 8-0 at 9 in the morning,” Shelton said. “It’s always good to get a bagel for breakfast at that time.”

All eight players appeared in the 128-player, single-elimination singles draw as well, which meant the team had to recover from their morning doubles matches and take to the court again in the afternoon.

“We’re all used to playing doubles and singles, both from junior tennis and other tournaments,” Halldin said. “I think it’s fun to play both. I think sometimes if you play a lot of singles it can get kind of boring. [Doubles] makes it almost like a different game.”

Hadigian and Summaria lost their first round matches 6-2, 6-2 and 7-5, 6-2, respectively. Halldin and Zeitvogel rode first-round byes and second-round wins into the third round, but fell at that hurdle.

De Jonge, who received a first-round bye, and Rico, who did not, both reached the Round of 16. Rico lost to Rogers 6-2, 6-2 in what was the first all-Pepperdine match of the tournament.

“It’s hard, because you see them every day,” Rogers said, of playing a teammate in a tournament. “It’s always tough, but it’s just a part of tennis.”

It would not be the last all-Pepperdine match, though. Rogers and Fellin met each other in the final Oct. 26, and played a grueling three-set match. After losing the first set 2-6, Rogers catapulted himself back into the match by winning eight straight games. Rogers won the second set 6-0, and carried his momentum to a 6-4 third-set victory.

“It’s always nice to get hardware,” Rogers said. “This is my fifth year in college, and I haven’t won a single fall tournament […] To do something like this is something I can take a lot of confidence from, but there’s still a lot of things I need to improve.”

Although Rogers ended the day victorious, he and several other players praised Fellin for his performance in the tournament.

Schaechterle said Fellin worked tirelessly to improve his game in the offseason, going so far as to fly to New York — without Pepperdine funding — to play the M15 Ithaca, NY tournament Oct. 4-10.

“Pietro [Fellin] played a phenomenal tournament, I want to give a lot of credit to him,” Rogers said. “He’s made some big strides this fall.”

In reaching the finals, both Rogers and Fellin qualified for the ITA National Fall Championships in San Diego from Nov. 4-7.

The Ralphs-Straus Tennis Center is not a novel spot for the ITA Southwest Regional tournament, as Pepperdine previously hosted the event in 2018 and 2019. Schaechterle said this consistency of the venue is unusual in the case of ITA tournaments.

“It’s something that brings a lot of pride for the team, and for the entire University,” Schaechterle said. “I think it speaks to how committed the University is to tennis. As a coach, I love being a place where attendance matters, and tennis is a big time sport here.”

The lack of travel time and their familiarity with the courts were advantages Pepperdine carried into the tournament, several players said.

“People are coming from Arizona, other parts of California, even Hawaii,” Shelton said. “So people have to go pretty far, and we’re lucky to be right on campus.”

With matches going on at the same time side-by-side, noise was a constant factor. Screeches from players sliding on the hard-courts, back-and-forth thuds from tennis rackets, aggressive “C’mon’s!” from fired-up teammates — these are all parts of the college tennis experience.

“That’s something I’ve never really experienced before,” Halldin said. “It’s really loud. It’s not always the best type of manners, sometimes it’s out of those manners. I think for sure that can bother you, and you just have to really stay calm and not think about it. It makes it a special atmosphere.”

Looking Forward to the Season

Men’s Tennis released its 2021-22 schedule Oct. 21, and will begin playing the new season away against Stanford on Jan. 21. The season finishes April 23, when the Waves are scheduled to battle Santa Clara in Malibu.

Calling the schedule challenging would be an understatement, Schaechterle said.

“I’m thrilled and proud that we are able to go home and away with some elite programs, I think it speaks to their respect for Pepperdine tennis,” Schaechterle said. “I am concerned that we might have bitten off more than we can chew. So that’s definitely on my mind, but I have so much confidence in the guys.”

The team is using fall tournaments like this to ready itself for the difficult road ahead, Schaechterle said. Several players said the team’s expectations for the season are high.

“We’re going to have a really good team this year,” Halldin said. “We’re going to play really tough teams where we have great, great opportunities as well. I’m looking forward to it. We’ve been doing a lot of on-court [practice] and a lot of fitness; I think we’ll be really ready by January.”