Professional surfer and photographer Larry Beard has had his fair share of unparalleled underwater experiences — including some extraordinary swims with whales.

“Over the top. It’s just these over-the-top experiences slapping you in the face,” Beard said of his close encounter with the humpbacks in Tonga. “You don’t even really have time to process things properly.”

Beard spent three weeks in this little island country in Oceania during September 2017, the first week as a guest and the remaining two as a photographer. He said the experience was life-changing, and to this day he catches himself remembering that this life can be so much more brilliant than we think.

“I can’t just slip into who I was before,” Beard said. “It’s about keeping that euphoria.”

Beard is a well-known oceanic photographer living in San Clemente, Calif. Having been a professional surfer along California’s coast for decades, Beard said his background with the sea fosters a deeper appreciation for the ocean.

Most well-known for his wave photography, his close-up images of whales on a recent trip to Tonga have become staple pieces of his work. He first started in fashion and commercial photography, only shooting nature in his spare time, until his passion overcame him and he redirected his sole efforts to capturing the beauty of the sea.

He said he’s always dreamed of one day swimming with whales, saying he noticed the disconnect between being on shore capturing footage and actually being in the water where everything is much more up-close and personal.

Beard said the boat in Tonga will drop those adventuring into the waters right in the midst of the whales’ heat run, which is when the male whales chase the females in hopes of reproducing.

“If you are afraid, right away you get a sense of communion between the humans and the whales,” Beard said, noting the level of trust that falls between the animals and people.

With this level of trust also comes an acute awareness the whales have of their surroundings, so much so that Beard says they don’t even touch you.

“The calves will come right up to you, and the mothers will be watching from below,” Beard said. “One time, I lifted my arms because I thought one of them was going to bump into me, but he didn’t even touch me.”

He also said surfing gave him a feeling of freedom he’s been drawn to ever since, and his knowledge of the tides and currents have helped him to know where to go for the best shots when taking pictures. “As a pro surfer, you get to know the oceans and the waves, and you learn how to respect them,” he said.

But Beard was not always a photographer. He said he’s been a part of 15 different businesses throughout his life, the keeper of an entrepreneurial spirit he learned from his father.

Beard said he was 36 years old, working in marketing and advertising, when it all began and he first realized the potential for him to express and explore his artistic side further.

“We were on a shoot, and my friend nudged me, and he was like, ‘Larry, couldn’t you take these photos?’”

And the rest is history.

Beard said there are times when he’s shooting inside the barrel of waves and the strength and power of them can throw him. “In ways, it’s like a pit bull with a rag doll,” Beard said. 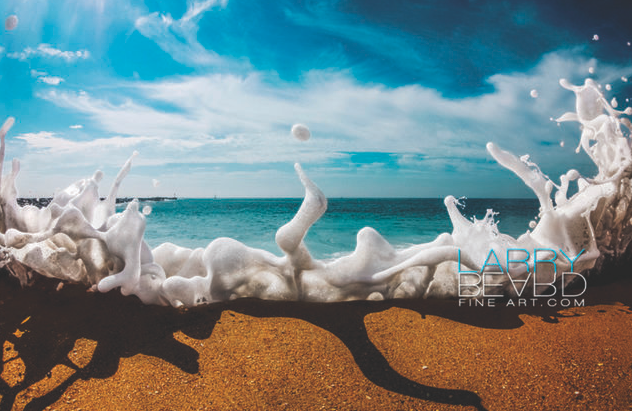 Even still, he said he prefers to shoot in more shallow water where breaks in the waves are more dramatic, making for more interesting pictures.

After being a photographer for the past 17 years, Beard said the constant opportunity to create something incredible keeps him inspired. “It keeps me intrigued,” he said.

Beard also works extensively with I Support A Clean Ocean Project to bring awareness to all the little things people can do to protect and conserve our oceans.

As for ocean conditions changing, Beard said that in recent years, water clarity has actually improved. He also thought back four or five years ago when a virus came down from Canada and devastated the starfish population.

“Once a starfish contracted the virus, it would jellify and fall apart,” Beard said.

The disastrous effects of the virus spanned years and only recently has the starfish begun to repopulate.

Beard said one of the best parts of his photography is bringing experience to people who may have otherwise never been able to have it. “We get to sell our imagery as art for people to enjoy.”

He said he loves bringing the experience and illusion to people who may see the water from the shore, or may have never seen the ocean at all.

“Two things [keep me going],” Beard said. “I never got a good photo from the couch. And [the idea that] I could capture one of the best photos of my career today.”