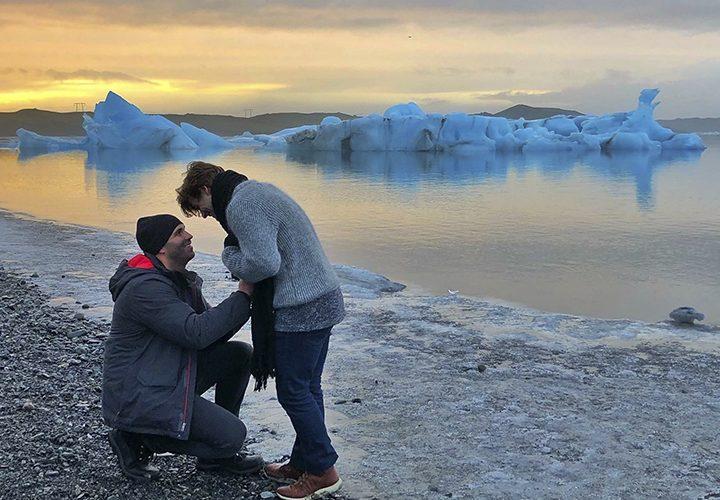 Pepperdine alumnus Blake Knight proposes to his fiance Garret Clayton on Jan. 10, 2017, in Iceland. Knight graduated in 2009 and is now a screenwriter for film and television in Los Angeles.

Alumnus Blake Knight (2009) spends his days writing screenplays, playing with his dogs and inspiring acceptance for all. He’s a screenwriter for film and television in Los Angeles. He and his fiance Garret Clayton created their LGBTQ+ YouTube channel “A Gay in the Life” in July.

“We wanted it to be a platform that allowed people with voices who might be in more marginalized areas or where they just may not have a platform to do that to kind of speak out,” Knight said. “We really wanted to normalize queer relationships.”

Knight said he wanted to create a safe space where queer individuals from all walks of life had the freedom to express themselves. He created “A Gay in the Life” to further normalize the queer community. In addition to providing informational and inspirational content, Knight and Clayton also post more lighthearted content like fun date night ideas. The episodes are about 10-20 minutes each and often feature special guests who talk about their own stories in the LGBTQ+ community.

“Queer people from all over the world have different perspectives on what growing up as queer in their country [was like],” Knight said. “Someone who is growing up as trans in the Philippines might have a completely different experience as someone who’s trans in New York City.”

Knight said he and Clayton want to encapsulate those key differences and help shed light on the challenges queer people face. Knight said he’d like “A Gay in the Life” to be a resource for queer people, which is why they provide references to other organizations geared toward helping people in the queer community.

“We have a lot of young people saying, ‘I’m 14 years old and I’m gay, but I live in small-town Wisconsin, and I know that my family’s not going to accept me. What should I do?'” Knight said.

Knight is engaged to “Teen Beach” Disney Movie star Garrett Clayton, who already had a large fanbase prior to starting the Youtube channel. Knight said Clayton was in the closet during the filming of the “Teen Beach” movies under the suggestion of people in the industry. 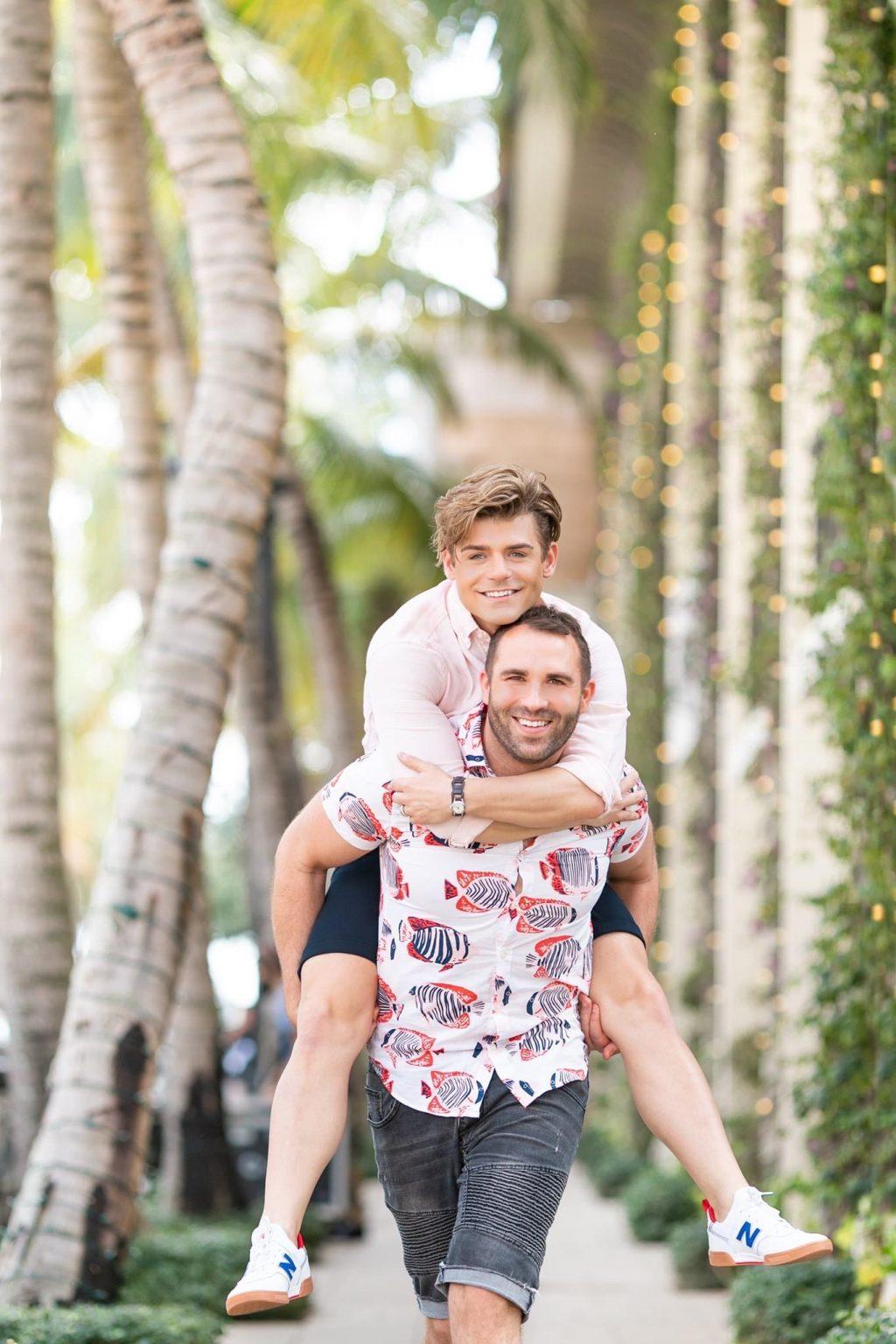 Knight gives Clayton a piggy back ride near Aneé Atelier in Palm Beach, Fla. in March. In July, the couple created an LGBTQ+ channel titled "A Gay in the Life."

“After he came out, he started getting a lot of messages from young queer people saying, ‘Thank you so much for being out and being proud and basically giving us hope for what our lives could turn into,'” Knight said.

Knight and Clayton met in 2011, and neither could’ve predicted they would be where they are now in their relationship. They first met in a diner where Clayton was working as a server, and Knight was working as an assistant for an executive that frequented the diner.

Knight said they couldn’t have imagined a world where it was acceptable to be in a healthy long-term relationship with someone of the same sex, and they are excited to be married. 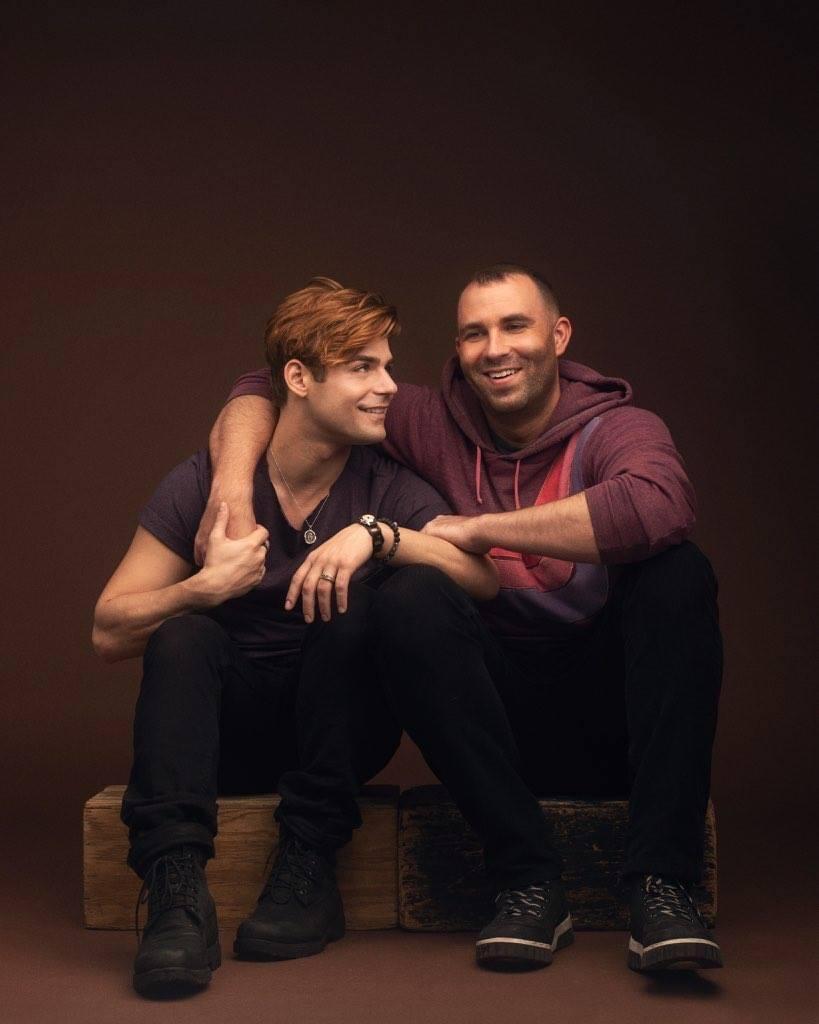 Knight and Clayton smile at each other for a photo taken by Luke Fontana in early 2018. After dating for almost eight years, Knight said this was one of the couple's first shoots after coming out.

Knight said he originally went to Pepperdine with the mentality of it being a religious school that could help him figure out his sexuality that he had struggled to accept.

“[I thought I’d] pray the gay away, and I thought that was the thing that I was supposed to do,” Knight said. “But then I got there, and my freshman suite was full of lots of really hot gay guys.”

Knight said he didn’t expect that Pepperdine would be the place where he’d feel safe enough to be who he was freely and openly.

“I was very concerned that my being out would not be widely accepted,” Knight said. “I grew up in Texas also, and that was a huge concern that a lot of my family members would not be on board, and it kind of went as expected. They were very shocked.”

Shortly before Knight came out, he said he had to come to terms with being gay and understand that it’s OK. He also wanted to emphasize communication with those around him during that time.

“I had to realize like, ‘Oh, this is who I am, and if other people don’t accept it, that’s OK with me,’” Knight said. “I can try and talk to them and communicate my message to them, and if that works, it works. If it doesn’t, it doesn’t, but all I can do is just be a good person.”

Knight said he originally came out during his junior year at Pepperdine. He was the president of Sigma Phi Epsilon from 2008 to 2009. He said his brothers and the community accepted him. Knight said SigEp was the one of the first fraternity in the US to openly welcome LGBTQ+ members.

According to a graduate study on the Perceptions of Transgender Students in Social Fraternities and Sororities, the fraternity is known as the first fraternity recognized by NorthAmerican Interfraternity Conference (NIC) to make a statement of inclusivity of transgender brothers. Today, Knight has continued his involvement in leadership programs for his fraternity.

Knight smiles alongside his class of Sigma Phi Epsilon brothers in Malibu in 2007. After coming out as gay his junior year, the alumnus said he was accepted by his fraternity community, as SigEp was one of the frontrunners in openly welcoming LBGTQ+ members.

“I had a really amazing, positive experience,” Knight said. “I had a lot of people coming to me saying that they’re really proud that I had come out and that they were there to support me.”

Knight said during his time at Pepperdine, there was no official club for queer people due to the University’s policies. Nonetheless, queer people founded an unofficial nameless gathering of their own where they would spend time together in a supportive environment.

“I kind of had a come-to-Jesus moment with myself where I was very happy knowing that I was gay,” Knight said. “I was in a place where I was knowing this about myself and not struggling with it.” 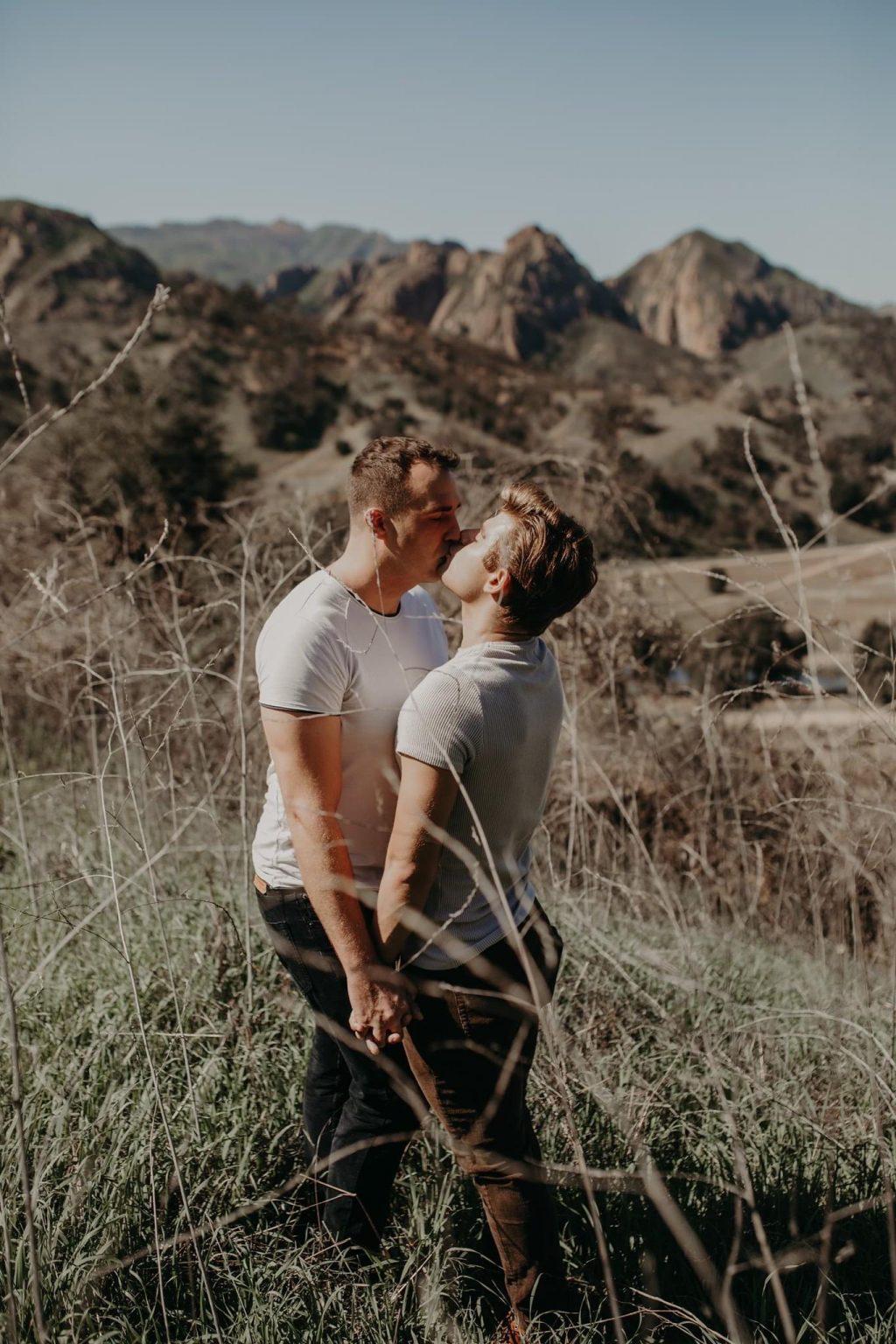 Knight and Clayton kiss in the mountains at Malibu Creek State Park for their engagement photos in February. Knight said they hope to inspire acceptance for all queer people and normalize the queer community in society.

Throughout his collegiate career at Pepperdine, Knight said he felt he was able to explore a lot of his interests, especially in screenwriting. He had multiple professors who helped cultivate his love of screenwriting, which ultimately led to his decision to pursue a career in that field.

“You can write something and put it on screen and when people around the world watch it, it can literally change their minds about certain issues and things for the better,” Knight said.

Knight said the power to change hearts and minds comes with the territory of storytelling in general.

“I remember when I was younger seeing my mom watch ‘Will and Grace’ and laughing along to this show that was being syndicated across the country,” Knight said. “It was normalizing gay characters or queer characters in homes all across America.”

Knight said the influence of TV shows and movies can become a beacon of hope for those who are otherwise hopeless; normalizing something that has been a point of controversy helps to defuse some of the tension surrounding the topic.

Knight said a lot of the television we watch on a daily or weekly basis can shift our thought process to be more productive in a society that’s constantly evolving.

“It just affects the way that you think about relationships in general,” Knight said. “You might just be more open to what their experiences are too. I think that’s kind of magical.”

Knight said he’s pitching more scripts now than ever. Though there’s a lot of new challenges to filmmaking in light of the pandemic, the writing side is still active. He has worked on an educational show called “This Just In,” which illustrates moral lessons for middle schoolers.

Knight said he also has a tutoring business where he helps K-12 children succeed in their academic endeavors.

“It’s just really rewarding to see how these young people grow and to know that you’re there to mentor them and to help them,” Knight said. “And a lot of the time, it’s not even about doing math. It’s, ‘Oh, what happened at school today? I can tell you’re upset. Do you want to talk about it?'”

Knight said he enjoys working with children and helping them grow not only in their education but also on a personal level.

“I think melding storytelling in education is very important,” Knight said. “It’s teaching them in a way that they don’t even know they’re being taught, and they’re also being entertained.”

Looking back on his experience at Pepperdine, Knight said his four years there involved many formative and surprising experiences. He never would’ve expected the loving community that welcomed him with open arms when he first came out as gay to his friends and family.

“The community is so loving,” Knight said. “I think that does have to do with the Christian background of a lot of the students there — and I’m saying that now as someone who does not consider himself Christian. I think that says a lot about the student body.” 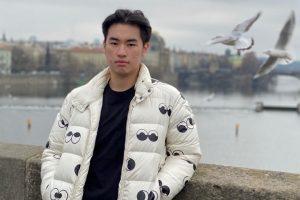