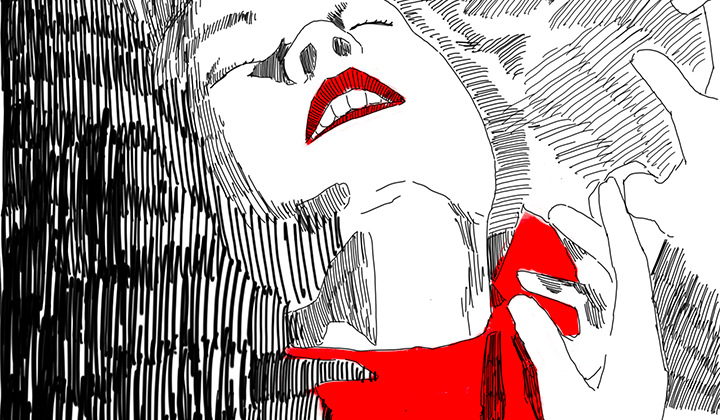 A drawing of Mitski surrounded by darkness. She is drawn wearing red lipstick and a red turtleneck. Art by Hee Joo Roh

In September 2019, Mitski performed her last show and told a crowded audience she would be entering an indefinite hiatus. Since then, the Japanese-American artist created a soundtrack for a graphic novel, released a song as part of “The Turning‘s” soundtrack and was featuerd on Allie X ‘s album “Cape God.”

The album opens with the song “Valentine, Texas” which sets the tone of her uncomfortable return to the spotlight.

“Let’s step carefully into the dark / Once we’re in, I’ll remember my way around” Mitski sings softly.

It is drenched in the earnest emotionalism Mitski’s ballads are famous for, but this time there is something different. There is a hesitancy in her return to making music.

“Who will I be tonight?” she asks in “Valentine, Texas.”

In an interview with Rolling Stone, Mitski spoke about how the vulnerability that comes from making music took a toll on her, which was what led to the artist’s two-year hiatus. Yet, despite the pain of making music, Mitski made the conscious decision to continue producing art.

“I have to do this even though it hurts me, because I love it,” Mitski said. “This is who I am … I’m going to keep getting hurt, and I’m still going to do it, because this is the only thing I can do.”

As the second verse begins, “Valentine, Texas’s” somber, stripped-down backing gives way to a discordant and dominating synth melody before leading the listeners into the second track and lead single.

Mitski released the lead single “Working for the Knife” on Oct. 5, alongside its music video. It continues this theme of Mitski’s fear of returning to creating art that is meant to be consumed and performed publicly.

“I always thought the choice was mine / And I was right, but I just chose wrong,” the musician sings. “I start the day lying and I end with the truth / That I am dying for the knife.”

Unlike her other albums, which draw from piano ballads and indie sad-girl guitar riffs, her sixth studio album draws inspiration from ’80s synth-pop. This is apparent starting in the song “Stay Soft” which is an upbeat, catchy song detailing loving a person despite weakness, which becomes a reoccurring theme.

The fourth and fifth songs named “Everyone” and “Heat Lightning” are slower self-reflecting ballads almost reminiscent of the Velvet Underground‘s smoky proto-punk sound.

The songs “The Only Heartbreaker” and “Love Me More” interrupt the hazy, soft environment. They each enter full of the vibrant ’80s pop-esque desire to dance in spite of heartache and neediness.

Despite the lively environment created by bright synthesizers and an electric beat, Mitski’s lyrics for the two songs are full of desperation.

She begs for attention from a person whose affections are just out of reach.

“I need you to love me / Love me more, love me more / Love enough to fill me up,” Mitski sings.

Mitski’s feelings of self doubt and fears of replacement shine through in the eighth track, “There’s Nothing Left Here for You.” The title itself reminds listeners that there’s nothing here for them anymore, there’s only music Mitski is making for herself because she has to.

“Should’ve Been Me” draws inspiration from ’80s pop once again, this time charged with a dance beat that sounds straight out of a Hall & Oates song.

“I Guess” begins the finale of the album. Mitski uses it as a chance to thank her fans for their enduring support despite the hiatus.

“From here, I can tell you, ‘Thank you,'” Mitski harmonizes.

Mitski’s reoccurring metaphor is her hesitancy to reenter the world of music, to enter darkness again despite knowing the toll it might take on her.

“That’s Our Lamp” is the true ending to the album providing no definite conclusion or resolution, just the acknowledgement that she is back whether she was prepared to be or not.

“That’s our lamp / It shines like a big moon / We may be ending / I’m standing in the dark,” the musician sings.

Mitski repeats the lyric, “That’s where you loved me” over and over again before the music fades away. She reminds people they only appear to love her when she is hurting, when she is in the dark, when she is so desperately in pain that she has no choice but to release it in the form of song.

“Laurel Hell” clocks in at just over 30 minutes long. It relies on imaginative lyrics, experimental sounds and an air of nostalgia in order to invoke the true meaning of the confusion, heartbreak, uncertainty and joy that comes from creating art for the sake of consumption. It is Mitski’s most self-aware and self-reflective album yet.