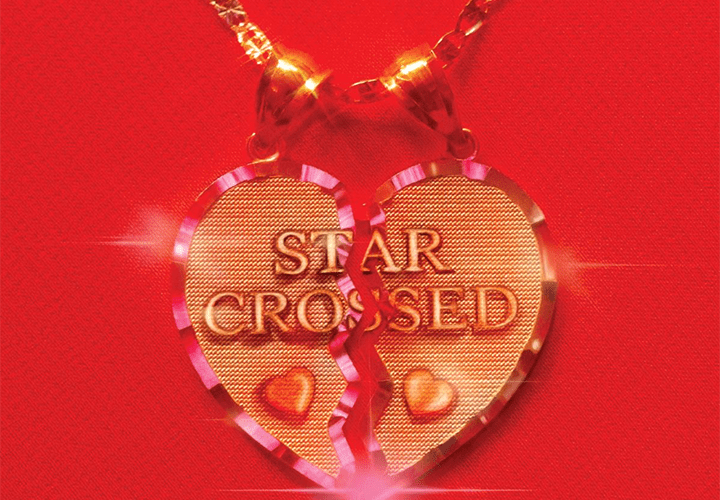 The cover of “star-crossed” shows a hazy broken heart necklace emblazoned with the album’s title. Musgraves’ album is about her heartbreak, making the subject of the cover appropriate. Photo Courtesy of KaceyMusgraves.com

Kacey Musgraves’ released her fifth studio album, “star-crossed,” on Sept. 10. The first album since her 2020 divorce from ex-husband, Ruston Kelly, is an exploration of her feelings following the separation.

“star-crossed” is Musgraves’ first album to move beyond the country genre and firmly into pop, and while there are some standout songs on the tracklist, the album overall is underwhelming after her Grammy-award-winning Album of the Year, “Golden Hour.” Transitioning almost fully to pop music strips some of Musgraves’ charm, while the songs on her latest record are much less lyrically interesting than her past bodies of work.

In an interview with Elle, Musgraves described how this album is structured in three parts — like a classic Greek tragedy.

“The word tragedy just popped into my mind,” Musgraves said. “I was like, ‘Whoa, what if the album was formulated like a modern Shakespearean or Greek tragedy?’”

The first part of this tragedy opens with the album’s titular lead single functioning almost like the prologue for the story to come, opening the record with the words, “Let me set the scene.”

The scene Musgraves sets for the album is one of two star-crossed lovers who are fated to fail, stand-ins for herself and her ex-husband. In the album’s second track, “good wife,” Musgraves begs God to let her make her husband happy, because she knows they need each other. This song is one of the highlights of the album and seems almost antithetical to the beautiful, billowing love she described for Kelly in 2018 with “Golden Hour.”

Somewhere in Musgraves’ turnaround from an album written in the midst of falling in love to one lamenting the end of the same relationship, she lost some of the energy that used to characterize her music. The songs on “star-crossed” feel sedated compared to a tracklist bursting at the seams on “Golden Hour.” Even her previous album’s slowest songs had a strong pulse to them, created by her signature twang and lyrical prowess, as well as the album’s country and pop fusion.

“star-crossed” includes minimal country music influence, marking Musgraves’ first venture this far away from the genre she is known for performing. While the songs are very pop, the Texas native’s natural twangy voice still shines through, making the deviation from country music more prominent and reminding listeners of her past, better bodies of work.

Following her tragedy framework for the album, the song “simple times” describes Musgraves reminiscing on how easy life was as a child, longing for the times before her marriage began to break down. She wishes she was back just walking around the mall with friends, because, as she says, “Being grown up kind of sucks.” This track’s relatable lyrics and addictive melody make it one of record’s best.

“breadwinner” is part of the second act in Musgraves’ tragedy, and is the best song on the album. This song describes how men seem to want women who are breadwinners until they no longer serve their desires, as she says, “He wants your shimmer / To make him feel bigger / Until he starts feeling insecure.”

Despite its sad but powerful message, “breadwinner” features the most upbeat tune of the record, a welcome reprieve from the relaxed sounds characterizing the bulk of the album.

While she is describing experiences from within her own divorce, Musgraves manages to touch on problems a lot of people can relate to in the midst of a breakup. Her song “camera roll” explores the feelings one gets from looking at photos of past relationships.

“if this was a movie…” is all about how you hope for the fairytale ending in a relationship that doesn’t happen in reality. This level of relatability is powerful, but the lyrics just don’t compare to what she’s done before and aren’t strong enough to make them stand out.

As Musgraves closes “star-crossed” with her final act, she accepts the end of her marriage and expresses her intention to move forward with her life in the track “keep lookin’ up.” She reminds herself things will always get better in “there is a light,” and closes the album with a cover of Violeta Parra’s “gracias a la vida.” Her closing track is entirely in Spanish, and the fact that Musgraves is not a fluent speaker is clear in how she sings the song, as she sounds out of place and a little uncomfortable.

While her performance of the song is a bit shaky, “gracias a la vida” is a perfect closing track for an album like this. The title translates to “thank you, life” and is essentially Musgraves thanking her life for all she has.

“star-crossed” deals with personal and hard emotions surrounding the divorce of two real people, but overall it is a weak showing for an established artist like Musgraves. When compared to even her older albums, this record doesn’t occupy the same level of greatness.

“star-crossed” is available to stream on Spotify and Apple Music.

Body and Soul: School is in Session—In Person 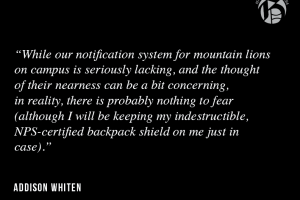 Being tucked away in the Santa Monica Mountains gives Pepperdine its characteristic sweeping ocean views and adds a nice...
Copyright 2013 Jupiter Premium Magazine Theme
Back to top