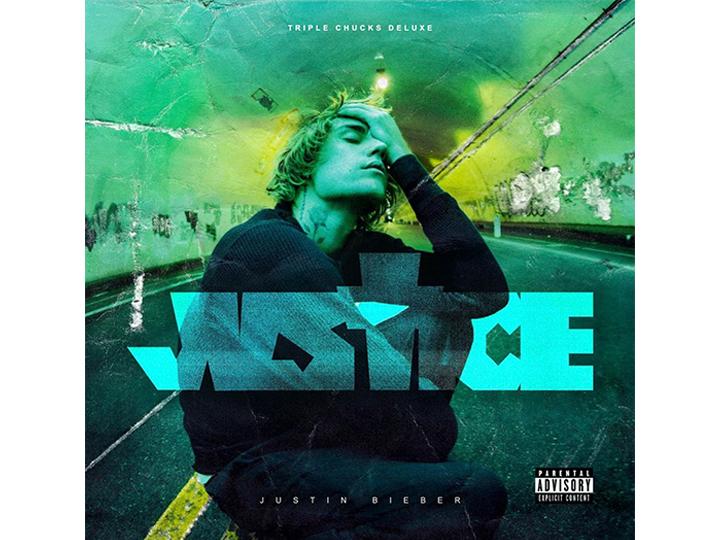 The cover of Justin Bieber’s sixth studio album “Justice” shows the pop singer crouched in a highway tunnel. The deluxe version of the album, released March 26, features 22 songs and includes collaborations with Khalid, Daniel Caesar, Quavo and many others.

Justin Bieber’s sixth studio album, “Justice,” is a reflective pop album that finds Bieber at a variety of moods and production styles.

The 27-year-old pop icon released the album March 19 under Def Jam Recordings, followed by a deluxe version with six additional tracks just a week later. “Justice: Triple Chucks Deluxe” weighs in at a hearty 22 songs, providing listeners just over an hour of music, compared to 16 tracks on the original.

Bieber’s sound is hard to nail down on this album. The music on “Justice” ranges from Christian-inspired ballads, true-to-form Bieber pop anthems, Afro-pop dancehall bops and radio-friendly hip-hop tracks, featuring everyone from Tori Kelly to Skrillex to DaBaby. While many of the collaborations are fun and dynamic, the mood of the album shifts so drastically from track to track that “Justice” as a whole feels disjointed to listeners.

According to Bieber, there are a few reasons why this album is called “Justice.” In an interview with Vogue, Bieber shared that his first name “Justin” actually means “justice” in Latin, which he felt was an appropriate album title in a year filled with so much pain and racial discrimination. For these reasons, Bieber said he decided to include two Martin Luther King Jr. sound bites in the record.

The first song on the album, “2 Much,” opens with the well-known 1963 King quote: “Injustice anywhere is a threat to justice everywhere.” The placement of this bite feels jarring given the rest of the same track is a heartfelt falsetto tribute to Bieber’s wife, Hailey Baldwin Bieber, who he references as his “biggest blessing.” Where listeners expect to hear Bieber crooning about the broken state of the world and the racial injustice plaguing the country, they instead hear a loving piano track that might be played during a first dance at a wedding.

A similar theme emerges on the seventh song, aptly titled “MLK Interlude,” when Bieber includes an excerpt from a sermon King gave at Ebenezer Baptist Church in Atlanta in 1967. The sermon is moving and powerful but feels misplaced given its position before one of the album’s most upbeat love songs, “Die For You,” featuring Dominic Fike.

It seems like Bieber’s decision to include the MLK snippets came from an earnest place. In an interview with the Zach Sang Show, Bieber said his reasoning for including the sound bites was that he wanted to amplify King’s voice to his younger audience. However, because King’s words are lacking context and do not relate to the subject matter of the rest of the record, their inclusion feels performative at best and inconsistent with “Justice” as a whole.

Lyrically, Bieber’s Christian faith largely influenced “Justice.” Since being re-baptized in 2015 and publicly attending Churchome in Los Angeles, Bieber’s “Justice” feels like his most faith-centered album yet. Many tracks on the record include biblical references, most notably on the Chance The Rapper-assisted banger, “Holy.”

The collaboration between the two Christian artists feels natural, and the song is the perfect marriage of top 40-friendly R&B and upbeat gospel. On “Holy,” Bieber describes himself “Runnin’ to the altar like a track star,” which likely represents the singer’s eagerness to rededicate his life to God as well as his fast-tracked marriage to Baldwin, who he proposed to in 2018 after the couple dated for six months.

Many tracks on “Justice” find Bieber in an introspective mindset. On “Deserve You” and “As I Am,” Bieber reflects on past struggles and grapples with self-doubt. On the former, Bieber sings “When I’m in my thoughts sometimes/ It’s hard to believe I’m the person you think I am/ […] I’m prayin’ that I don’t go back to who I was.” These lyrics reference a dark time in Bieber’s past that included a battle with drug addiction and a 2014 DUI before the singer got clean under the mentorship of former Hillsong Church pastor Carl Lentz.

“Deserve You” and “As I Am” take an upbeat turn both musically and lyrically as a buoyant pop groove supplements Bieber’s words on the latter: “Take me with the good and the ugly/ Say, “I’m not goin’ anywhere”/ You were there for me when I was actin’ selfish/ And you prayed for me when I was out of faith.” These lyrics reflect the most overarching theme of “Justice”: Bieber’s love and gratitude for his wife.

Interestingly, the many collaborations on “Justice” represent both the best and worst parts of the album. Independently, the partnerships serve their given purposes. “Peaches” featuring Daniel Caesar and Giveon is a summery party anthem, “Lonely” with benny blanco is a dramatic piano ballad detailing Bieber’s experience of becoming a mega-popstar at 16 and “There She Go” featuring Lil Uzi Vert is a quintessential Bieber bop that’s unmistakably Tik Tok-friendly.

These collaborations work best independently, though, and therein lies the problem. In simple terms, none of these features sound like they go together. Acoustic guitar-driven tracks like “Name” featuring Tori Kelly feel worlds away from the dancehall-inspired “Loved By You” featuring Nigerian powerhouse Burna Boy. While much of the music on “Justice” revolves around the same themes of love, faith and thankfulness, it is still sonically disjointed.

“Justice” has strong moments where poignant, often-spiritual lyrics blend seamlessly with pop beats, but the overall product is erratic and reflects an artist who is trying to do too much on one record.