A Legacy of Love: Justin Chai Honors His Father’s Life Through #LoveLikeJeff 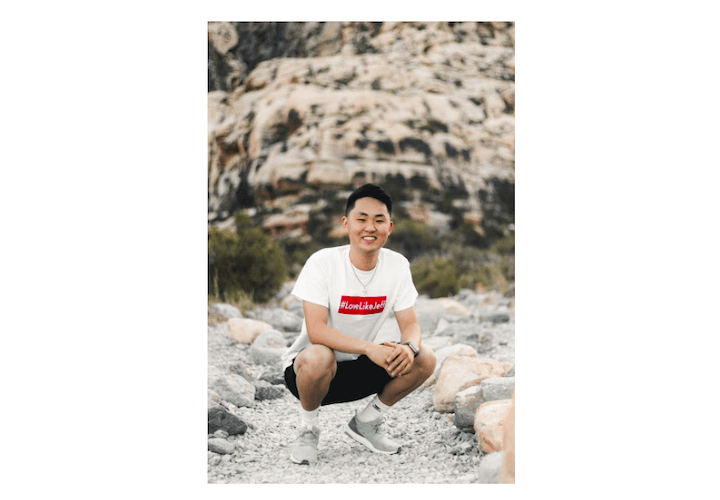 Justin Chai wears the T-shirt he created with the hashtag #LoveLikeJeff to spark conversation about his father’s legacy of love and testify to God’s faithfulness. Photos courtesy of Justin Chai

Many students recognize senior Justin Chai by the bright red hashtag #LoveLikeJeff printed on the front of a T-shirt he often wears. The hashtag can be spotted from the crowd as he leads worship for Celebration Chapel and Koinonia Campus Mission (KCM) or hosts a small group for his residents as a Spiritual Life Advisor (SLA).

For Chai, the meaning behind #LoveLikeJeff goes far beyond what could be written on a tee.

One Sunday morning in the fall of 2017, Chai’s first semester at Pepperdine, he said he received an unexpected call from his brother saying their father, Jeff Chai, had suddenly fallen unconscious and paramedics were taking care of him. Chai left church immediately and went home to find the paramedics driving his father to the ER.

“I just remember seeing the scene — all the ambulances, all the paramedics, and I just fell to my knees and was like, ‘What? What is happening?’” Chai said.

Though he was trying, Chai said his faith was rocky at the time — he wasn’t attending church consistently, but he had just returned from a KCM retreat two days before. It was there he heard the pastor speak about looking to God through suffering.

“In that moment, I don’t know what got into me, but I was like, ‘We just need to pray; I don’t know what to do but pray,’” Chai said. “We were just standing outside of the ER, and I sounded like a madman — I was just yelling at God.”

Chai said he and his family waited in the hospital, praying for a miracle. After hours of attempting to revive him, the doctors finally pronounced Jeff Chai dead due to sudden cardiac arrest.

Unable to process the loss of his father, Chai said he remembered a journal entry he had written just days before his father’s death. The spiritual high he experienced during the retreat suddenly disappeared as he began to mourn.

“[In my journal] I was like, ‘God, I’ll do anything for you; you’re so good,’” Chai said. “I always look back, and literally the next day, I was like, ‘What just happened? [My dad] is gone and I don’t know what God is trying to do.”

For the first few months after his father’s death, Chai said he felt he was running from God, unable to pray or sing in worship. Consumed with bitterness, Chai attempted to fill the void he felt in his heart without God but said he was always left unsatisfied.

Chai said he then decided to use the emptiness he felt in his heart as a motivation to find answers and, ultimately, grow closer to God. 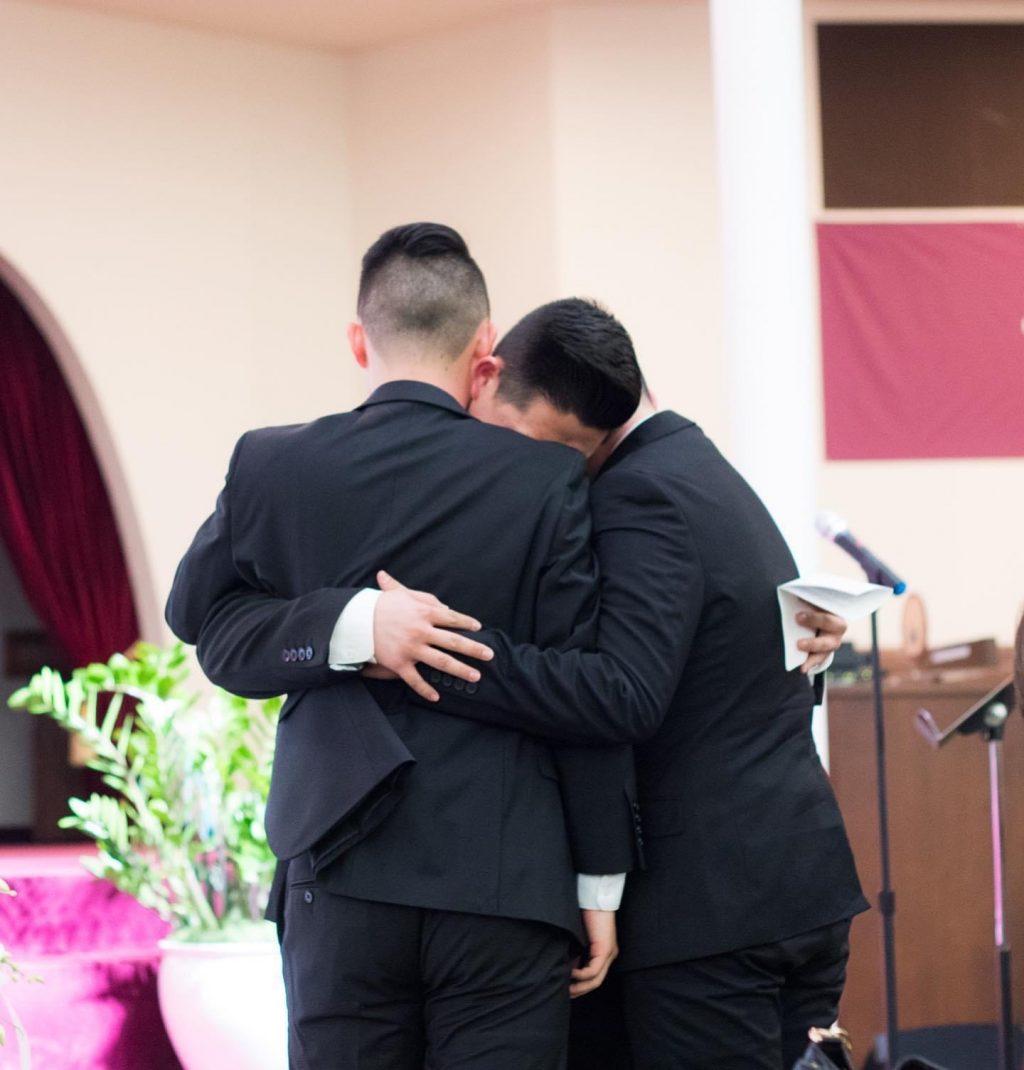 Justin and his brothers Brandon and Dylan embrace each other at their father’s funeral.

“This is a moment where God broke me,” Chai said. “[He] was like, ‘You need to rebuild your faith on something stronger and really get to know me,’ and that’s what I did. I was hungry for answers — I needed to know more about this God.”

After growing up in the church, Chai said he was finally forced to wrestle with his faith on his own by rediscovering the meaning of salvation and reintroducing himself to who God is.

“That’s when my love for Jesus and for God just grew exponentially, because how can I not love a person who died for my dad and died for me freely?” Chai said. “[God] didn’t expect anything from our lives, but we get to be in paradise with [Him] because of Jesus. I firmly believe that once you find out more about God and His character, it’s impossible not to love Him more.”

The biggest transformation he experienced through it all, Chai said, is the realization that God gives His salvation freely to those who will receive it.

“That’s when a lot of stress, a lot of tension and bitterness toward God were relieved,” Chai said. “It made me realize that death is not the end — death is not something to fear — because this grace is free, and we’re going to be in paradise soon. It almost sounds weird, but I look forward to that moment; I look forward to seeing not only my earthly father but my Heavenly Father that day.” 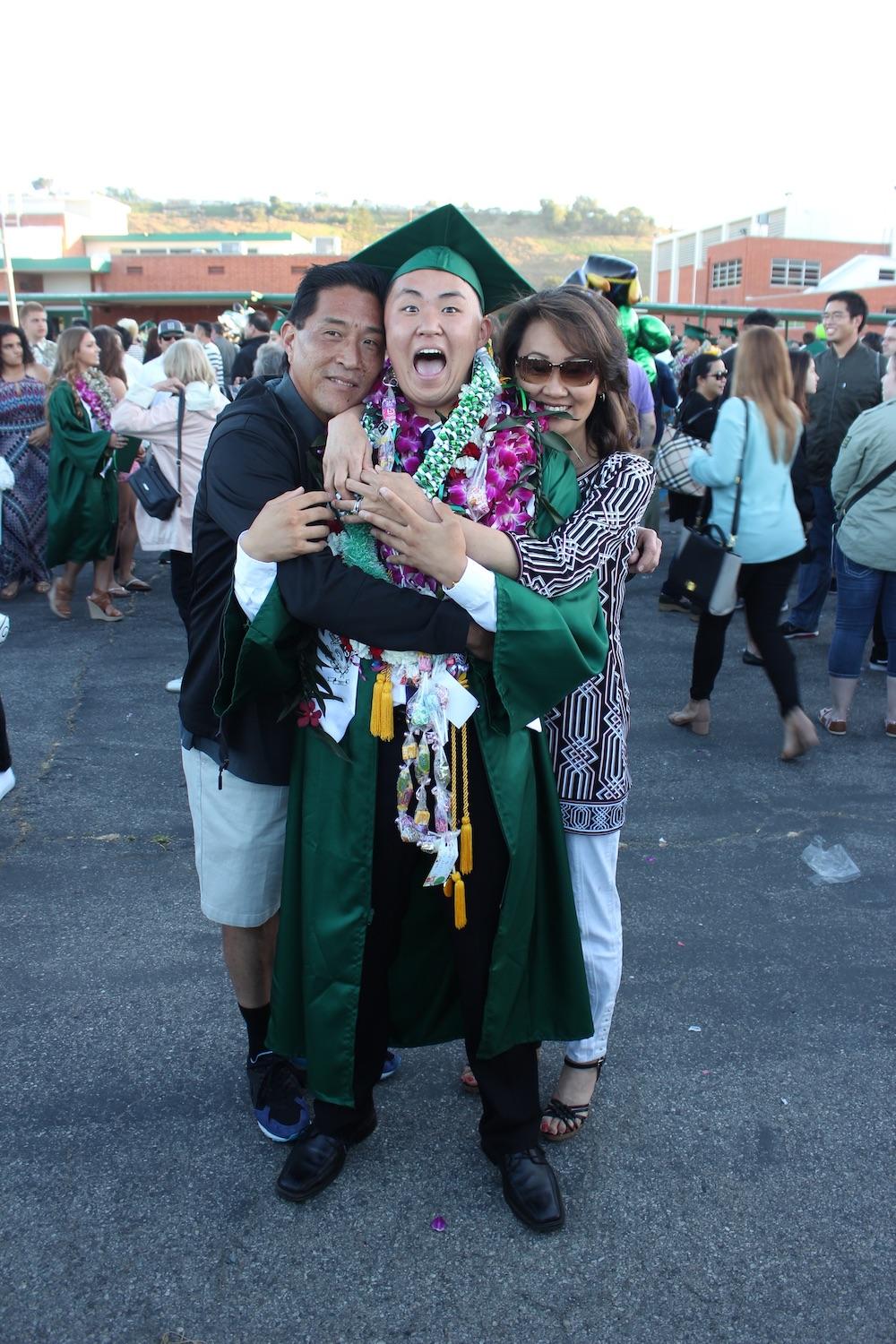 In celebration of his high school graduation, Justin is embraced by his father Jeff and mother Suzanne Chai.

Looking back, Chai said he is sure God showed him a glimpse of what His unconditional love looks like through his father, who was not only his mentor but his best friend. 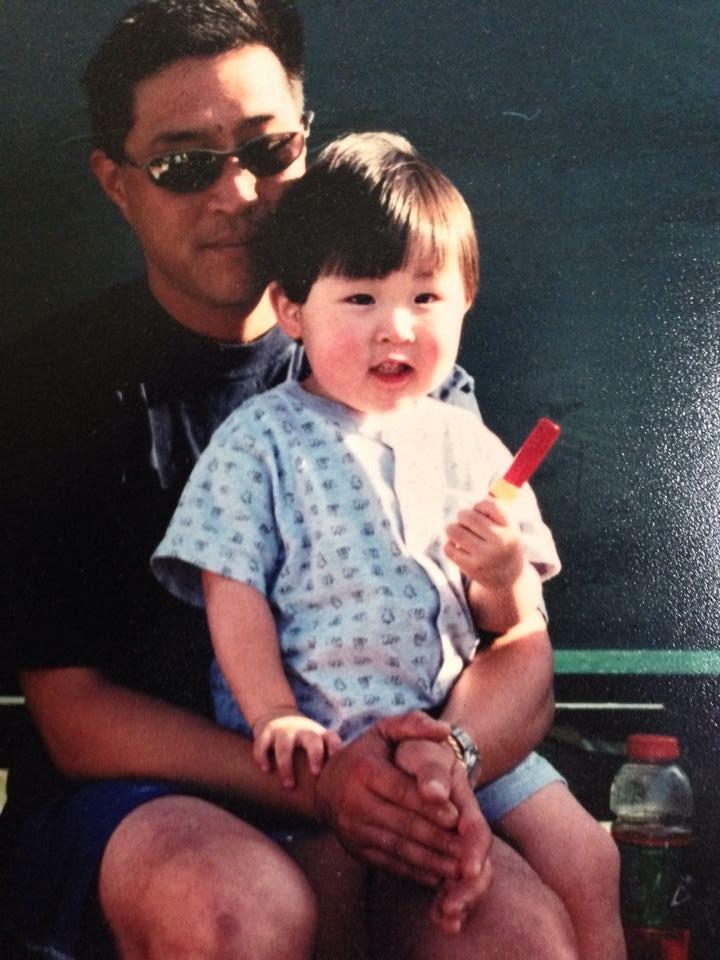 Justin sits in his father’s lap as a young boy. 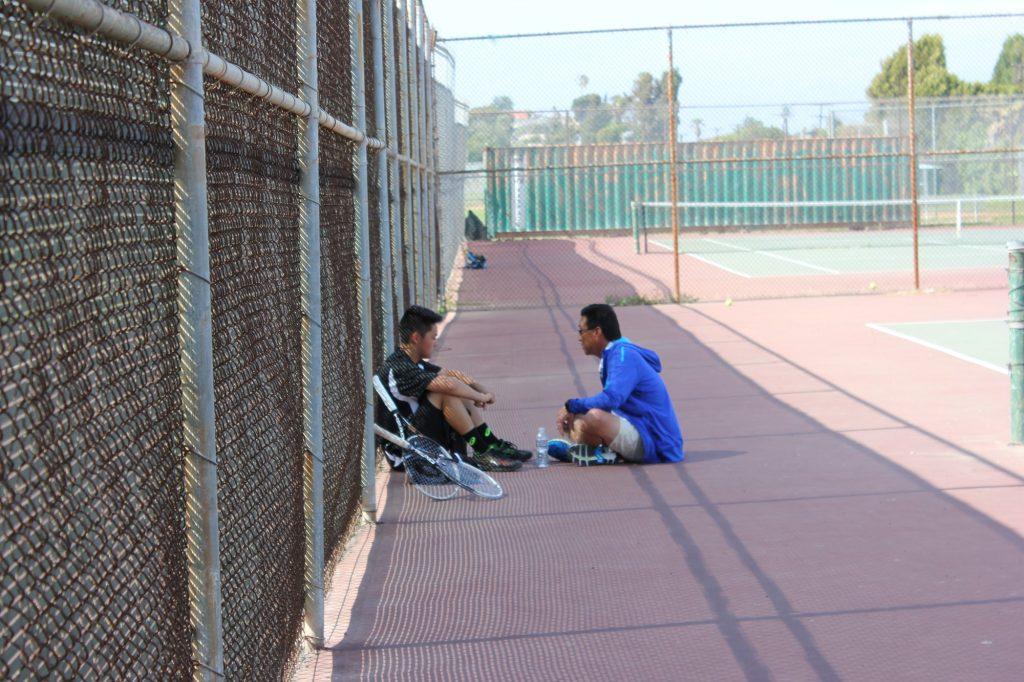 Justin’s father takes a moment to teach him a lesson while on the tennis court. “It was such a powerful moment of coaching and fatherly love to me,” Chai said.

Chai said his father carried a love and generosity that represents God’s character. His family created clothing with the hashtag #LoveLikeJeff as a way to remember him and testify to God’s faithfulness in their lives.

“We always get questions like, ‘What does that mean? Who is Jeff?’” Chai said. “We hope that those conversations can kind of spark something like, ‘This is my dad, but also this is the God we believe in, and this is who He is and what He has done for us.’”

Over the past two years, Chai said he and his family have seen radical changes in their personal lives and relationships with one another. 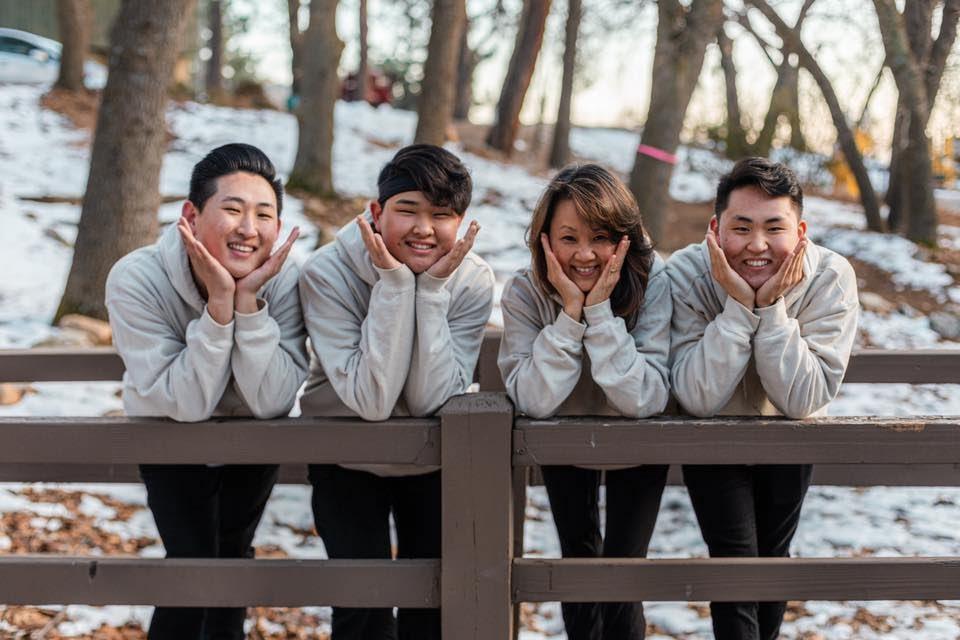 “We were already super close before [my dad] passed, but now we are so real with each other,” Chai said. “There’s nothing to hide in this family, and [my dad] is still the glue that holds us together.”

Every year, Chai said he and his family host a tennis tournament to honor his father, who dedicated over 25 years to the sport. The tournament also serves as a fundraiser for underprivileged tennis players. In 2019 they hosted the tournament in partnership with Compassion International.

“To see how my dad’s name is still being remembered and used to bless people is crazy to me,” Chai said. 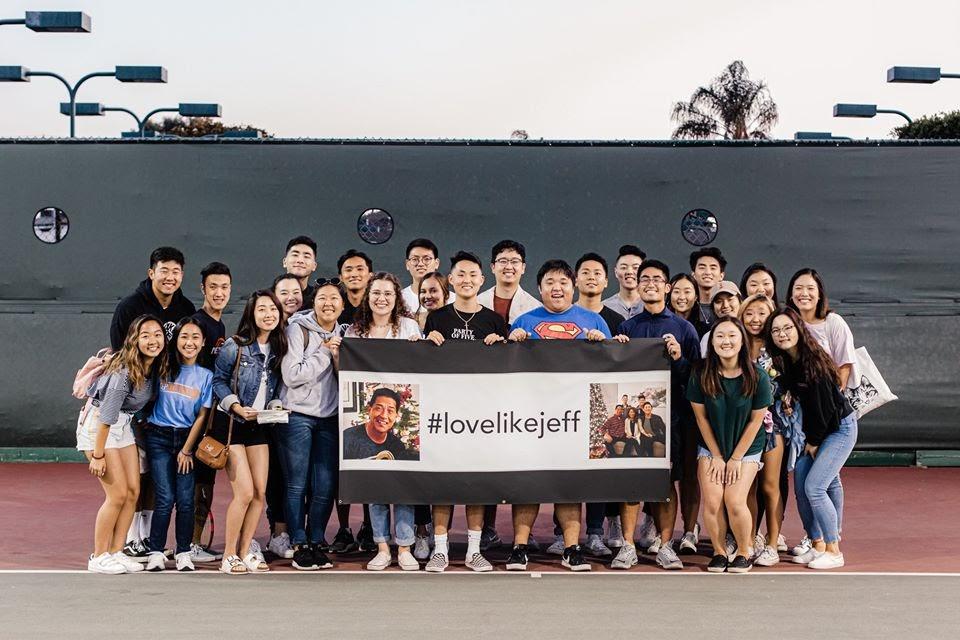 Friends and community members join Chai and his family for an annual tennis tournament in October 2019 to honor his father’s life and raise money for underprivileged tennis players.

Emma Sanchez, senior and close friend to Chai since their freshman year, said she looks up to Chai and his family for their resilience and faithfulness.

“The way they spoke [about God] was always fascinating to me because they weren’t angry with God or angry with the world,” Sanchez said. “At the funeral, you could see their pain, but you could also see their faith show completely through the entire process.”

Sanchez said she was often humbled by Chai’s ability to encourage her even while he was mourning.

“[Chai’s] faith shows his testimony — this part of his life where he relied on God completely through it all,” Sanchez said.

The Heart of It

From this experience, Chai said his heart has grown for people who don’t know Jesus.

With a smile, Chai said he and his family’s continued hope is all because of Jesus.

“I’m at a place now where He is my everything,” Chai said. “To see how God showed up in that moment and in those dark times — I have no doubt that whatever hard situation I go through, I know He’s going to be there, and I know I can rely on Him.”

When God Writes Your Story 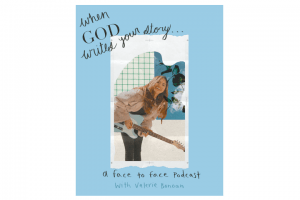 When God Writes Your Story

Via Apple Podcasts | Via SoundCloud | Via Spotify Valerie Bonoan, a recent grad of 2020, began her four years at Pepperdine...
Copyright 2013 Jupiter Premium Magazine Theme
Back to top