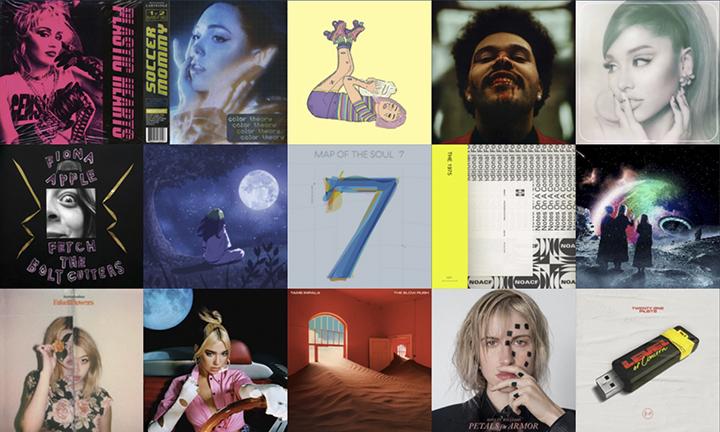 Chart-topping albums and their accompanying artwork from 2020. These albums are mixed, with new critically acclaimed and underground artists. Photospread by Beth Gonzales

Although 2020 was a quiet year for many industries, the music industry never slowed down.

As touring and live performances came to a halt in March, music production and the art of songwriting flourished among new and well-known artists.

Many popular, or “pop,” music superstars stepped up this year. Ariana Grande released her sixth studio album, “Positions,” in October. The catchy and vocally strong album reached No. 1 on the US Billboard chart, making this her fifth No. 1 album. Selena Gomez released “Rare” in January, her latest pop album with an edgy twist, before her venture into Spanish music this year. Rolling Stone called Gomez’s work one of the 50 Best Albums of the year.

Lady Gaga released her album, “Chromatica,” in May. Listeners may know this album because of her new Oreo product, helping to promote the album, or because of her song “Rain on Me” featuring Ariana Grande. The song reached No. 1 on the Billboard Hot 100 for the majority of 2020. Audiences adored these powerhouse divas together and the hard-hitting refrain of the song, showcasing the strength of women.

Miley Cyrus, a known pop-goddess and the woman who raised us, released her first full rock album, “Plastic Hearts,” in November, which included collaborations with Joan Jett and Billy Idol. This album included her hit single “Midnight Sky” which spent 21 weeks on the charts. Miley has never shied away from exploring genres and said she wanted to introduce her generation to the rock music that inspired her from a young age, thus creating the synth, rock and ’80s homage of an album.

In the blossoming world of new pop artists, Conan Gray released his first full-length album, titled “Kid Krow,” in March, following the success of his EP “Sunset Season” and his most recent tour in 2019. Audiences admired his ability to create concept music; surrounding fleeting childhood, suburbia and self-discovery, he is compared to artists like Troye Sivan.

In Gray’s raw song “Heather” he sings, “Why would you ever kiss me?/ I’m not even half as pretty/ You gave her your sweater/ It’s just polyester/ I wish I were Heather.”

Alternative and indie music had one of its strongest years in 2020. Many new musicians emerged with voices to be heard and stories to be told.

In April, Fiona Apple released “Fetch The Bolt Cutters,” one of the most critically acclaimed albums of the year. With her lack of repetitive choruses but twisted melodies that live in the listener’s head, Rolling Stone named it the second best album of the year. Fiona’s fifth album is a wild-symphony of alternative excellence. With her interesting arrangements and melodramatic murmurs, no music has sounds quite like it.

Tame Impala released their album, “The Slow Rush,” a treasure full of floating disco, funk and ethereal beats. The album, released in February, is also in Rolling Stone’s top 50. In the indie band realm, Beach Bunny is the fun, bouncy surf-band destined to make it huge. They released their album, “Honeymoon,” in February, and finally got noticed by critics. “Beach Bunny writes about heartache and insecurity with the wistful, plainspoken honesty of power-pop,” Pitchfork said.

Soccer Mommy also released her album, “Color Theory,” in February, and her song “Circle the Drain” helped her make an impactful dent in the alternative scene, with Rolling Stone naming her an artist to watch. Singer/songwriter Sophie Allison, or “Soccer Mommy,” delivers a bright sound to indie-rock and each track on the record has an unpredictable sound.

Phoebe Bridgers, who just made her Saturday Night Live debut, released her album, “Punisher,” in June, and broke through as one of the biggest alternative-folk artists of the year. She scored No. 1 on Billboard’s Emerging Artists chart. Bridgers is known for her undeniably honest lyricism. She writes about what scares her and reluctantly romanticizes life, while creating distinctive chord arrangements and unpolished vocals.

In “I Know The End” she sings, “No, I’m not afraid to disappear/ The Billboard said the end is near/ I turned around and there was nothing there.”

In the Korean pop world, BTS released two albums, “Map of the Soul: 7,” which was released in February and “BE,” released in November. Both albums reached number one on the charts and “BE” sold 2 million copies on the Hanteo charts on its release day.

The rap/hip-hop scene had many breakthroughs and successes as well. Rolling Stone recognizes Mac Miller’s album, “Circles,” released in January, in their 50 best albums. His song “Good News” also reached No. 17 on the Billboard charts. Audiences resonated with the simplicity of hope within Miller’s lyrics, as they try to understand his tragic life. Mac Miller died on Sept. 7, 2018, due to a drug overdose, yet his poetry lives on.

In March, another hip-hop breakthrough was Lil Uzi Vert’s concept album, “Eternal Atake,” and he received 20 chart topping songs in the first week of the album’s release. With impeccable production and the influence of crooning and dangerously good rapping, this album stood out in the hip-hop scene.

Within innovative rap, Machine Gun Kelly released his album, “Tickets to my Downfall,” in September, and achieved massive success by mixing rock into the hip-hop genre. Early ’00s punk and Hot Topic tunes are back with Kelly’s new music. In his song “Bloody Valentine” he sings, “I don’t do fake love but I’ll take some from you tonight/ I know I’ve got to go but I might just miss the flight.” Kelly’s teenage angst turned electric reverb is why the album debuted at No. 1 in both Top Rock Albums and Alternative Albums.

In January, new music in the country genre included Little Big Town’s “Nightfall,” and their success came due to their emotional density and four-part harmonies. For Chris Stapleton’s November release “Starting Over,” Billboard named it the best country album of 2020 due to his musical edge and personable lyrics.

In the world of rock, Green Day’s February album release, “Father of All…,” reached No. 1 on Billboard’s Album Sales chart. Twenty One Pilots’ April single “Level of Concern” became the anthem of quarantine and spent four weeks in the top spot on the charts. The world needed to hear Tyler Joesph and Josh Dun sing, “You could bring down my levels of concern/ Tell me we’re alright/ Tell me we’re okay,” amid the worldwide heartbreak.

In June, genre-bending group Haim released their album, “Women in Music Pt. III,” and it is nominated for Album of the Year at the Grammys as well as Best Rock Performance for their song “The Steps.” Their multidimensional sound and songwriting has been the leading factor to the sisters’ success.

New rock artist Maggie Lindemann released her singles “Knife Under My Pillow,” in August and “Scissorhands” in October, receiving acclaim from Billboard as an artist to watch. Lindemann effortlessly combines rock with ballad-like lyrics and brings goth to a vulnerable level.

Beabadoobee, a new rocker who released her album, “Fake It Flowers,” in October of last year, peaked at No. 14 for Emerging Artist chart. Her singles “Care” and feature in Powfu’s “death bed (coffee for your head)” soaked up hours of radio play and spent 35 weeks on the Billboard charts. She has a ’90s aesthetic and creates music meant to be danced to or screamed out loud.

With all these new sounds flooding our streaming services, it is clear that these artists, along with some fresh faces, will be delivering in 2021.

Whether it is Grammy-nominated or a personal favorite, as Bob Marley said, “One good thing about music, when it hits you, you feel no pain,” thus especially true in the unforgettable world of 2020.