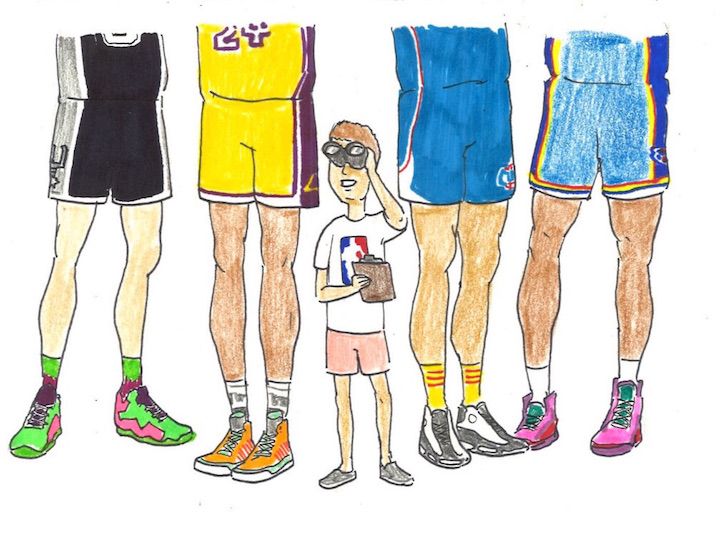 Believe it or not, it’s October, which can only mean one thing: the start of the NBA regular season. Just kidding. There’s also playoff baseball, the NFL and college football (that’s your cue to joke about Pepperdine’s lack of a football team).

For yet another year, the NBA’s Western Conference will be the dominant half of the league. The level of talent is stacked. Merely thinking about the unlimited ceiling of Anthony Davis, the ever-so-loaded San Antonio Spurs, Russell Westbrook (destroyer of worlds), contract year Kevin Durant, Golden State’s title defense and DeMarcus Cousins’ Herculean struggle of carrying the Sacramento Kings should make any NBA fan ready for the upcoming season.

But for now, let’s answer some basic questions about the 2015 season.

I only watched the playoffs last season, so I know the Golden State Warriors are pretty good. Should I expect them to win again this year?

Not so fast. This is what makes the 2015-16 season interesting. As of Sept. 30, CBSSports columnist Zach Harper gives Golden State a 4-to-1 odds of winning this year’s NBA Finals. The defending champions sit behind the Cleveland Cavaliers, who are at 11-4 odds — which, coincidentally enough, are the same odds they had on Oct. 6, 2014 — and the perennial contenders, the San Antonio Spurs. But then again, the Warriors were not favored to win last year.

Vegas odds aside, this year’s Golden State Warriors are still great due to their moves — rather, their lack of moves — during the offseason. With exception of center David Lee, who had a limited role due to the rise of Andrew Bogut, the Warriors kept all key players from last season’s title run.

Expect the Warriors to continue being a more refined version of the 2004-05 Phoenix Suns, whom according to Basketball-Reference.com, put up nearly identical field goal percentages, three-point shooting percentages and points. In simpler terms, expect the defending champs to play how you or I would want to play NBA 2K16: with a flashy offense, tons of 3s and highlight reel-quality plays.

I want to support a local team during my time at Pepperdine. Should I root for the Los Angeles Lakers or Clippers?

Back in middle school, this would have been a much easier question: You would undoubtedly be a Lakers fan. Thankfully, for many reasons, the middle school days are over. If you wanted to side with the most successful team today, you’d be a Clippers fan.

Ever since the Lakers slowly stopped dominating the league (which was sometime between Phil Jackson’s retirement and Kobe Bryant’s first major injury), the Clippers have seemingly overtaken their in-city counterparts as the best basketball team in Los Angeles.

Yet the Lakers are one of the most decorated franchises in not only league history, but also in the history of professional American sports. Like the New York Yankees or the Dallas Cowboys, the Lakers will always be in the spotlight. Playing in one of the biggest, if not the biggest, media markets in the country doesn’t hurt this truth.

For the upcoming season, the Clippers and the Lakers have switched roles. The Lakers are approaching yet another rebuilding year with Kobe Bryant’s so-called final season. After Bryant retires, or the off chance he plays somewhere else next season, the Lakers will boast an All Star-less backcourt with Jordan Clarkson, Nick “Swaggy P” Young and D’Angelo Russell, the third-overall pick in the 2015 NBA Draft. Despite their current lack of experience, the Lakers have a bigger long-term upside than the Clippers.

The Clippers are coming off one of two starkly different playoff series. Last year, they overcame the Spurs in seven exciting games, but promptly collapsed against an undermanned Houston Rockets team they should’ve been able to handle. In typical LA fashion, the Clippers hogged the spotlight in the offseason with the DeAndre Jordan contract bonanza that left Dallas Mavericks owner Mark Cuban livid, a new rivalry in the West and a trail of emojis in its wake. No, seriously.

This is precisely the part where siding with the Clippers could get ugly — or interesting, at the very least. Have the Clippers truly survived all the locker room chemistry near-misses?

The Clippers’ roster boasts enough drama potential to outshine the Phil Jackson-Kobe-Shaq drama-fest of old. Over the summer, the Clippers picked up Lance Stephenson (troll), Paul Pierce (cocky veteran) and Josh Smith (still never passes up an opportunity to shoot). Throw in fiery perfectionist Chris Paul, his verbal sparring partner DeAndre Jordan and the result is a Monstars version of the Warriors: a smallball lineup built to spontaneously combust. If this team doesn’t have at least one nationally-televised meltdown by Christmas, start preparing for the apocalypse.

Who will be the biggest disappointment in the West?

The Portland Trailblazers, who lost too many key players in free agency and didn’t fare terribly well on draft night. After trading All-Pac-12 defensive team member Rondae Hollis-Jefferson to the Brooklyn Nets, the Blazers ended up with an undersized small forward who could have played baseball, and a player from Spain’s ACB League who won’t see NBA action for at least another year. In other words, they ended up with Pat Connaughton and Daniel Diez.

Portland’s plight can be summed up in the Oregonian writer Joe Freeman’s Sept. 30 article, “With four starting jobs up for grabs, Trail Blazer’s training camp has heightened importance.” The headline and the article reads more like a NCAA basketball article than an NBA article, but it’s true. The Blazers have approximately zero “sure things” on the roster outside of Damian Lilliard — and even his clutch-time assassin level of play took a step back last season.

So who will make the playoffs?

The Warriors, Rockets, Thunder, Clippers, Spurs, Pelicans, Grizzlies and Jazz will make the playoffs (in that order).

Yes, the Utah Jazz. Who else would it be? The Dallas Mavericks, who boast the oldest roster in the league?

I’m a #sciencemajor, so I’ll miss a lot of NBA games because of all my labs. Which ones should I try to watch?

As mentioned earlier, try to watch a Clippers-Mavericks game at least once (preferably when they’re playing in Dallas).

The Nov. 3 game between the hometown Lakers and the Denver Nuggets will feature two rookie point guards who were picked in the top ten of the 2015 Draft: D’Angelo Russel and Emmanuel Mudiay (picks 3 and 7, respectively).

If you want to watch pure scoring, watch the Warriors play the Thunder at home. The two-game stretch between Feb. 27 and March 3 could be a preview of the Western Conference Finals.

The best opportunity for an in-game brawl will happen on Jan. 16 between the Sacramento Kings and the Clippers. Although rooting for violence isn’t the best move, this game will crush some spirits no matter what.