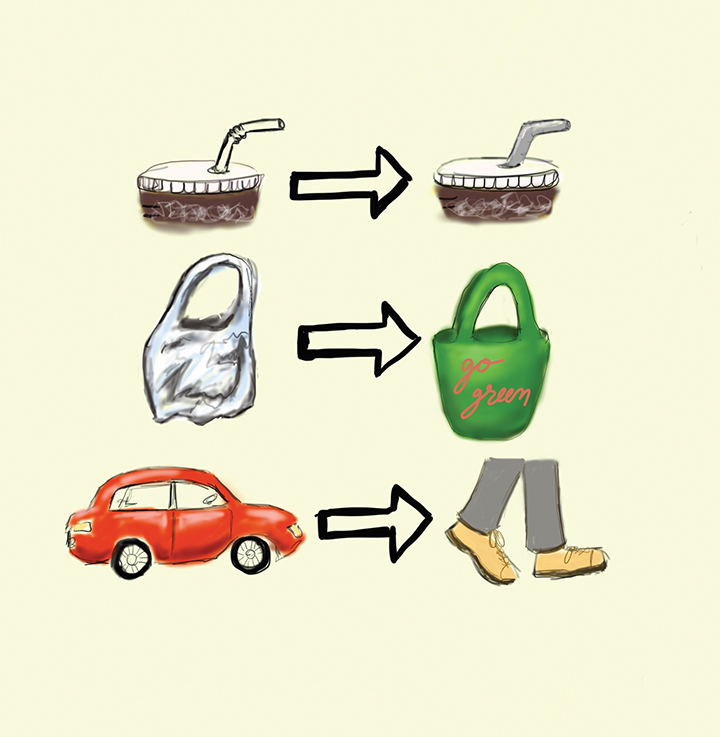 Today’s world is a pretty ridiculous one. Too often, the media is saturated with discouraging headlines. Rather than actually catalyzing change, government officials won’t stop arguing about whether climate change is real or not.

Whatever one’s views on global warming and its severity, it’s impossible to deny that living an economically friendly life is a good goal to set. Rather than considering a political statement or agenda right now, consider some practical steps to take on in an effort to preserve and sustain this world.

First, recycle some junk. Got a lightly-used paper napkin, an unwanted Ralphs receipt, a used humanities notebook or some old Tupperware? Don’t throw it away. Recycle it. Seriously, it’s not that big of an effort. There are recycling receptacles all over campus.

When they aren’t in use, try to make sure electronics and appliances are unplugged. No doubt most people probably turn off the lights when they’re the last out of a room, which is an excellent way to conserve electricity. However, research suggests that appliances and electronics that are left plugged in may be consuming trace amounts of power, even if they’re turned off. Josh Crank from the Live Brighter blog explains how this works. It takes less than a second to unplug a blender or toaster or phone charger, and it’s an easy way to save a little electricity.

Take short showers. Yeah, this one is hard for a lot of people. So many love a nice, long shower. It’s a great way for a body to wake up in the morning, or to de-stress at the end of the day for the night showers out there. Of course, taking a long, hot shower once in a while is well and good, but it’s late summer. It’s plenty hot outside, so a cold shower might actually be more refreshing. Not only will the cold cut down on shower time as people rush to get out of the chilly water, but studies such as the one done by Jessica Migala have shown that cold water in a shower actually has some health benefits.

These are all some fairly well-known techniques, so here’s one more way to help the environment that perhaps isn’t as commonly known. Download the Ecosia search engine. Ecosia is a browser like Google, but its ad revenue goes toward planting trees around the globe. Their website shows that they’ve planted over 66 million trees since they were founded.

They’ve always been forthcoming with data about their revenue and locations that they’ve planted trees in, so you can directly follow the impact that you make on the globe. Plenty of people have been using this search engine for a year or more, and it works as well as Google. And if it’s really difficult to find something when searching Ecosia, just search “Google” on Ecosia. This still gives Ecosia revenue and allows a standard Google search. Ecosia is even available as a plugin for Google Chrome.

These are just a few small steps that aren’t too difficult to take, and Pepperdine actually provides several more tips on living eco-friendly lives on the Center for Sustainability’s website.

Implementing each of these small changes tend to be relatively easy, and if everyone makes these adjustments, then there will be a clear, tangible impact on the quality of the world. Today, start working toward a better future: not a future of brown smog and acid rain, but of green grass and blue skies.