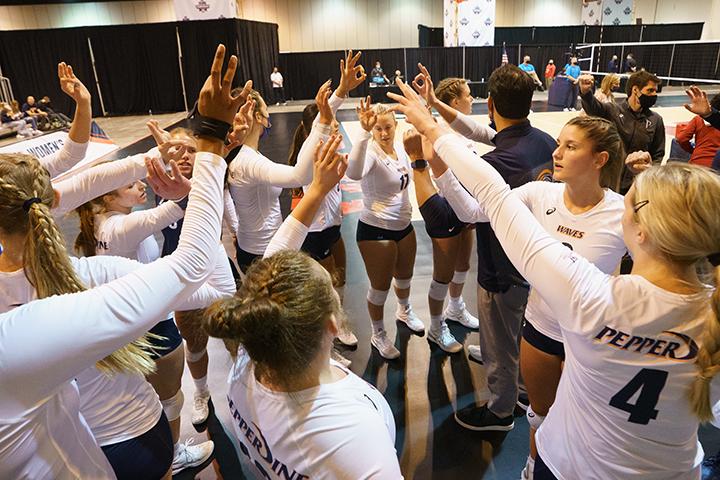 Pepperdine Women’s Volleyball huddles during its first-round match against UMBC at the Division I Women’s Volleyball Tournament in Omaha, Neb., on April 14. The Waves defeated UMBC in three sets but fell to Baylor in the second round of the tournament.

Pepperdine Women’s Volleyball’s NCAA Tournament run in Omaha, Neb., came to an end in the second round, as the unseeded Waves swept UMBC on April 14, but dropped a five-set thriller against the No. 12 Baylor Bears on April 15.

The Waves ended the spring 2021 season with an overall record of 17-4, but remain in search of the program’s first Sweet 16 appearance in the NCAA Tournament since 2011.

The Waves were within two points of pulling off the upset, up a set and tied 25-25 in the fourth, but the Bears closed the set and match for their second victory over the Waves in 2021.

“I am so happy that that was the match that I went out on playing and being a Pepperdine Wave,” senior middle blocker Alli O’Harra said. “Playing at that level was incredible, and to do it with amazing teammates by my side and just looking at them getting pumped — I had a blast, just knowing that I can be part of that — top 1% of the nation.”

Taking the court in front of a small group of friends and family members at the CHI Health Center Omaha, the Waves came out swinging in the first round against UMBC on April 14.

Pepperdine silenced the Retrievers in the opening set, holding their opponent to a -.103 hitting percentage and winning the set by a 25-7 margin.

“Everyone’s fired up to be here,” senior outside hitter Shannon Scully said. “The first round’s always interesting — playing on a new court, having fans in front of us, just a lot of different things. We just took advantage of it. We didn’t want to have today be our last game.”


UMBC battled back, keeping the second set close and forcing a set point in the third, but Pepperdine would win both sets, 25-22 and 26-24, respectively. The Waves completed the sweep in less than 90 minutes and moved on to the next round.

“No matter the score, if we’re up by a lot, or if we’re down by a few, we’ll still keep on fighting,” Head Coach Scott Wong said. “And that’s what we did late in the match.”

Scully contributed a double-double with 13 digs and 13 kills on an efficient .387 hitting percentage, while junior outside hitter Rachel Ahrens led all players with 15 kills and freshman middle blocker Meg Brown added nine kills on a .500 clip. Six different Waves each added an ace, while the Waves did not allow a single ace.

The first-round victory was the Waves’ second in three seasons, having defeated Northern Iowa in the first round of the big dance in 2018. The Waves missed the tournament in 2019.

For the second time in 2021, it took five sets to decide a match between Baylor and Pepperdine, but, again, senior outside hitter Yossiana Pressley and the Bears prevailed.

Pressley, the 2019 AVCA National Player of the Year, smashed 26 kills on a .321 clip to lead all hitters, but the Waves matched Pressley with a balanced attack.

Baylor struck first, winning the first set 25-21 behind a 6-0 mid-set run and an errorless .469 hitting percentage.

Baylor would not go quietly, jumping out to a big lead in the fourth set. Nonetheless, Pepperdine nearly stunned their opponents, clawing back from a 23-18 deficit to tie the set at 24. Ultimately, two hitting errors gave Baylor the set, 27-25.

The teams traded sideouts in the fifth set, and Scully added the 1,001st kill of her Pepperdine career, but Baylor took five of the final six points and the match.

“Alli had told me like a couple of games ago, ‘You’re really close to 1,000,’ and I was like, ‘There’s no way — maybe if they counted my stuff from freshman year,’” Scully said. “I didn’t think of anything like that. It’s great to accomplish something like that in my three years at Pepperdine.”

Zelaya finished with an outrageous 62 assists, seven above her previous career high, while Ahrens and Scully notched 19 kills each. The American Volleyball Coaches Association named both Ahrens and Scully honorable mention All-Americans.

Looking Ahead to the Fall

In a few short months, the Waves will take the court for the fall 2021 season.

O’Harra will move on to Boise State, where she will play both indoor and beach volleyball for the Broncos while in graduate school, but Scully has another year of eligibility for Pepperdine, should she choose to remain in Malibu.

Even if Scully does not return, the Waves will be in good hands with Ahrens, junior libero Madison Shields, Zelaya and Wong, who will be entering his seventh season at the helm.

Pepperdine did not win the West Coast Conference this season despite a 16-2 conference recording, finishing second behind BYU, and Wong said the team hopes to secure a conference title in the fall.

“The standard has been set and it keeps on being built on,” Wong said. “We know what it takes to be a great volleyball team on the court. What this year did for us was get a little closer to winning a conference championship.”