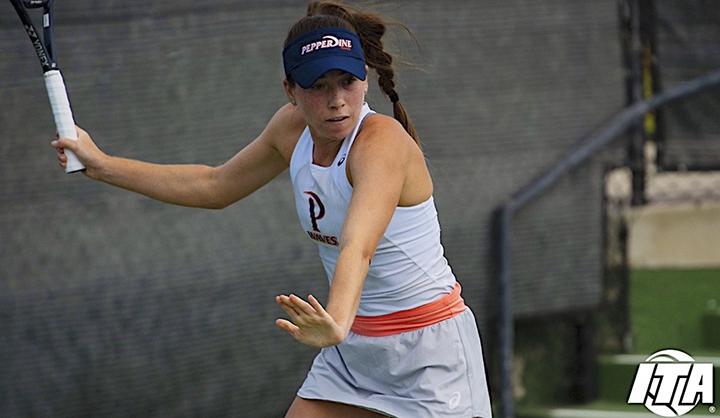 Pepperdine’s Women’s Tennis competed in the 2020 Oracle ITA Masters tournament the weekend of Oct. 9 in San Diego. It is the second Pepperdine Athletics team to return to competition after Men’s Golf competed this past week.

The tournament consisted of junior, collegiate and professional tennis players.

Ryngler and Redelijk competed in the Pepperdine uniform. Ryngler is a redshirt freshman, and Redelijk is a true freshman. For Ryngler, it was her first time representing Pepperdine in competition after transferring from the University of Texas.

“It was great to compete for Pepperdine for the first time,” Ryngler said. “I was happy to make my debut despite the unusual circumstances.”

Lahey — who finished last season as the No. 1 women’s tennis player in the nation, according to the Intercollegiate Tennis Association — also made her season debut and played her first match since March.

“It was special to be in that mindset again and go on the court and compete,” Lahey said. “I lost to two girls younger than me, but I was honestly just so excited and happy to play. I know there are going to be a lot of opportunities for me for the rest of 2020, and I am just enjoying being on the court and take each moment as a blessing.”

Unlike Lahey, Failla competed in a few tournaments this past summer and said she was excited about more opportunities opening up over the next few months.

Each player won at least one match at the tournament.

Social distancing measures were in place throughout the tournament to comply with San Diego County guidelines regarding COVID-19.

“It was weird and different with everyone having to wear masks and limited socialization when you are not playing,” Ryngler said. “They are strict about how many guests can come, so it is a different environment than I am used to.”

Ryngler said one of the hardest adjustments for athletes is getting used to competing again after a long time away from their respective sport.

“That first night I was trying to get myself back into the normalcy of play and just the right mindset of competing,” Ryngler said. “Once I stepped on the court and started playing again, everything felt right and awesome.”

Lahey said adjusting to a competitive environment has been challenging due to the fact that it is difficult to mimic.

“This was my highest level of competition for me in a long time,” Lahey said. “You have to be engaged the entire time, and I did not have that for the duration of the match. I felt my mind wander, and my biggest focus is to continue to play more matches.”

Despite the unusual circumstances, Failla said the atmosphere was one of excitement and joy.

“I think players had a lot more excitement than usual,” Failla said. “Everyone is so thankful for a tournament when that was taken for granted before the pandemic.”

Athletic teams at Pepperdine began training sessions with a majority of their athletes over the last couple of weeks, and team chemistry develops more as the teams begin to spend more time together.

“All the girls have been so welcoming, and it was so nice,” Ryngler said. “Everyone who came played, and they cheered me on all my matches.”

Lahey said she looks to play in a few more tournaments in the coming months after returning to Los Angeles last week.

Failla said her focus will be on nationals in Florida in three weeks.

The team finished 13th in the team national ranking before COVID-19 canceled the season.

On the men’s side, Guy Den Ouden competed in the French Open Junior Championships the weekend of Oct. 4 and made the semifinals. He is an incoming freshman from the Netherlands and joins a men’s team that finished with an undefeated record and ranked 19th in the Intercollegiate Athletic Association.