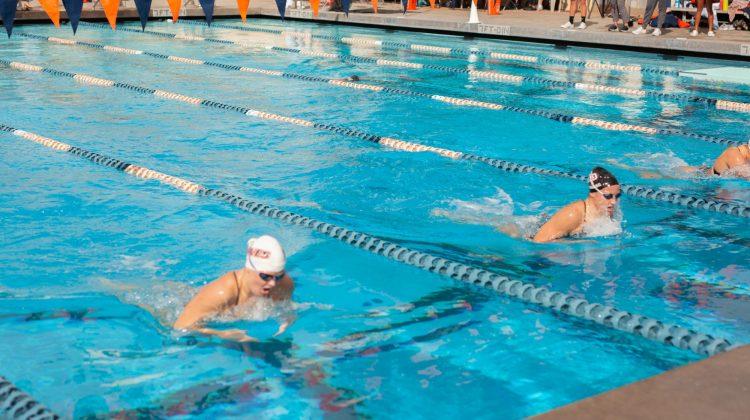 The Pepperdine Women’s Swim and Dive made waves yesterday in their win 154.5 – 105.5 against Azusa Pacific on Jan. 29. This was the team’s last dual meet before moving onto championships and postseason events.

“I think the highlight was just our team really came together to celebrate our seniors,” Freshman Emma Purdy said. “Being a freshman and getting to know them through this year, I couldn’t have asked for a better team. And so I’m just really grateful that we had today to spend with them and everyone’s doing really well and we’re representing them as best we could.”

Diving had a strong showing, with Holmberg and freshman Lexie Martin placing second and third respectively in the 1-meter dive. In the 3-meter dive, Martin and Holmberg placed third and fourth.

Swimmers lined up for the 200-yard medley relay, but broken scoreboards delayed the start of the meet. When officials announced the meet would begin without the scoreboards, calls of “play ball” arose from the Pepperdine C relay, and swimmers hopped into the water to begin the backstroke portion of the event. Pepperdine’s A and B relay team would place first and second, respectively after pulling away from APU’s A team.

The scoreboards were still dark for the 1000-yard free, but split times weren’t needed to see Kayye’s clear lead at the 100-yard mark — which she maintained, staying over a full body length away from the swimmer in second. Anderson and APU’s Hannah Frey would be neck-and-neck in the battle for second, with freshman Jessica Calderoni trailing close behind.

At the 800-yard mark, Frey had secured her spot in second, but Kayye finished the race with a time of 10:55.15, 15 seconds ahead of the second-place swimmer.

The scoreboards were up and running for the 100-yard breast. Pepperdine’s freshman Alexandra Browne took an early lead, but within the first 50, Morton inched her way to first. Jenna Sanchez came up from third to finish second, and APU’s Montana White took third.

In the 200-yard fly, APU’s Delanie Gearing came out strong in the first 50 meters with freshman Eleanor Maskovich a mere seven-hundredths of a second behind her. Maskovich kicked it in the third lap, taking first at the hundred meter mark.

Sophomore Tay Thomas and Calderoni pushed Gearing out of the top three, and the three Waves were neck and neck. Calderoni took first with a negative split, and Thomas and Maskovich were right behind her.

Calderoni was not the only freshman to win an event. Purdy would take the 50-free with a time of 24.54.

APU’s White won the 100-yard free, and the swimmers readied themselves for the 200-yard back. In the first 50 yards, APU’s Amanda Anderson was in the lead with Coughlin and Morton in second and third. Coughlin kept pace with Anderson, with identical splits for the second 50 yards.

At the 150-yard mark, however, the story changed. Morton pulled ahead of the two’s battle and in the last 50, Coughlin gained some space. Morton and Coughlin took the last 25, finishing first and second.

The 200-yard breast was an incredibly tight race. APU’s Gearing stayed within half a second of Kayye for the entirety of the race. Kayye defended her spot and won the race by four hundredths of a second at 2:27.19. An excited Kayye told her parents the time was a “season best.”

As the swimmers readied themselves on the blocks for the 100-yard butterfly, the officials told the athletes to wait, as there was an issue with seeding. Most of the athletes stepped down from the blocks to wait, but Bergthold remained standing.

Parents and athletes alike shouted support, and the coaches requested a 58 on the scoreboard. The swimmers dove into the water for another tight race, with Bergthold edging out Anderson by nine-hundredths of a second with a time of 59.32.

“I was just really excited to swim for all my fellow seniors and just the underclassmen,” Bergthold said. “And just everyone’s put so much in for this year and everyone’s been so dedicated to keeping our team COVID-free and we’ve been putting in the work and so we’re just trying to get in some really good swims before conference.”

In the 200-yard IM, Morton and Deitemyer came out strong in the first 50. APU’s Marci Yanagawa made up some distance during the backstroke portion, but Morton obliterated the competition in the breaststroke and freestyle, coming in first with a time of 2:12.71.

The teams gathered on deck yet again for the last event of the meet, the 400-yard relay. APU’s A team and Pepperdine’s B team had an explosive start, with the A team edging out a slight lead in the middle 200 of the race. The B team did not go out without a fight, remaining neck and neck with APU’s A team, with Pepperdine’s A team not far behind.

“I think the highlight of the meet was probably the senior relay at the end,” Bergthold said. “It was just so exciting to swim with my fellow seniors and just we’ve been through it all together. So that was just really fun. And just seeing how everyone swam for their seniors today. And it was really it was fun to watch.”

With this win, the meet ended. The coaches gathered the team to the edge of the deck, and encouraged them to shout out some highlights.

“I think it’s really important that we ride off of the positive energy at this meet and keep it going,” Purdy said.

“I think it’s just it just shows them all the heart that they have and they’re tired and so for them to do this well and have a lot of emotion behind this it was just a special day very, very excited and happy for our seniors to end on this note,” Head Coach Ellie Monobe said.

Bergthold said the team will be starting taper to prepare for the championship season.

The Waves have a two-week break before the PCSC Championships in St. George, Utah.

“The bulk of our training is behind us and not really too much more work we can do, just kind of fine-tuning a lot of the details to really make sure we have our best before we head to St. George,” said Monobe.

“Getting second last year by four points definitely has left us hungry and our girls are looking forward to securing a championship, in a perfect world, but more importantly, I think, bettering our school records, bettering our position and putting our best foot forward,” Monobe said. “We have another meet postseason after conference that I know a lot of girls are excited to qualify for.”