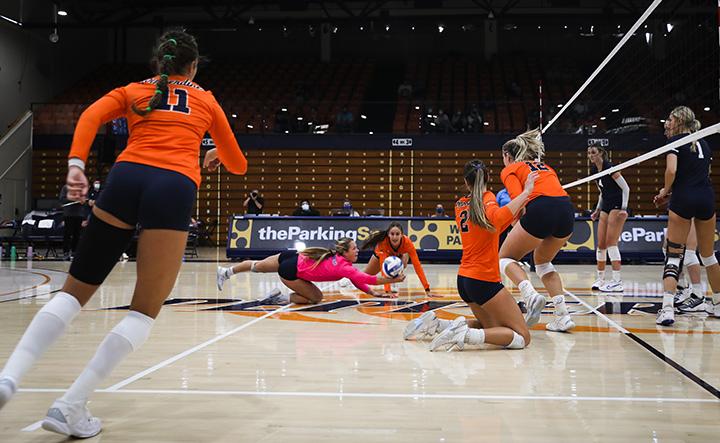 Senior libero Madison Shields (pink) goes for a dig in the Waves’ loss to BYU on Saturday, Oct. 16. Shields led the team with 18 digs on the night. Photo by Mercer Green

Since their five-set thriller win over Loyola Marymount, the Waves had a difficult week — losing to Pacific and University of San Diego, but edging out a sweep over Saint Mary’s College. The Waves struggled against BYU in the past, with BYU having a 29-10 record and winning the last matchup this past February.

The Waves won the first set, which was no small feat, given the fact BYU swept nine of their last 11 opponents in straight sets.

With the Waves down 6-3, freshman outside hitter Grace Chillingworth charged up the offense by scoring on a kill, assisted by junior setter Isabel Zelaya.

The Waves quickly went on a 5-0 scoring run, getting help from two Cougar errors increasing the lead to 8-6 and forcing BYU to call a timeout.

Both teams responded by trading points. Sophomore outside hitter Emma Ammerman started a quick offensive burst by converting on a kill. Senior middle blocker Rosie Ballo added to the run by scoring a kill, and senior outside hitter Rachel Ahrens contributed with a service ace, increasing the lead to 23-17.

“I think the biggest thing is to stay involved and kind of reading the play early so we know what’s coming,” Zelaya said. “I think we did a good job of changing that at the end there.”

This mini run proved to be the edge the Waves needed because they claimed the first set.

But the Waves had to work for their points, and that proved to be the theme of the game. The Cougars set the tone early, getting defensive stops and forcing the Waves into long rallies to score their points.

“BYU dug some balls and I thought they were pretty good with some defensive moves,” Wong said. “But whenever there’s a long rally, our goal is to always win those — we want to win the long rallies.”

The second set was a bit of the same, but had the opposite result.

Those long rallies came into play during the second set. In the middle of one long rally, the Cougars thought they had scored and stopped playing, but the Waves didn’t overreact, and Ballo scored on a block with BYU leading 10-9.

The Waves put on a 4-1 scoring run, which started on an Ammerman kill. BYU responded with a kill from junior middle blocker Heather Gneiting, but sophomore middle blocker Meg Brown and Ammerman teamed up on a block, tying the score at 13 and prompting another BYU timeout.

Fifth-year opposite hitter Kenzie Koerber racked up a kill, which sparked a quick 4-1 run from BYU to increase their lead to 23-18. This proved too much for the Waves, and the Cougars won the set.

“I think we get too relaxed and we’re not on top of things anymore,” Ahrens said. “I think just being mentally engaged and just knowing what our roles are on the court will help out a ton and that lack of mental awareness there.”

While the first two sets were full of action, BYU showed why they are one of the toughest teams in the West Coast Conference and only allowed 10 points in the third set.

Early on in the third set, Ammerman scored on a kill, and Ahrens converted on a service ace, tying the game at two apiece. After that, the Waves quickly lost control of the set.

The Cougars scored nine straight points and had an impressive hitting percentage of .407 in the third set. The Waves could not recover from that bombardment, and the score quickly ballooned to 11-2.

“They started serving a lot better during the third set, and we weren’t serving as tough,” Wong said. “Offensively, it’s hard to stop a team with that many weapons. I thought for set one and set two we served them tough, and that’s what we needed to keep on doing.”

Despite the two Waves timeouts called during the stretch, the Cougars did not slow down and went on another 5-0 scoring run, increasing their lead to 20-6 and defeating any hopes of a comeback. The Cougars won the set convincingly with a final score of 25-10.

“I think the mental adjustment that we needed to make was just playing together,” Zelaya said. “We started to spread out, but at the end we started to pick it up that last set.”

After a lackadaisical effort in the third set, the Waves responded in the fourth set with more energy. Early points came from an Ahrens kill and a service error from the Cougars.

But the Waves found themselves stuck in their earlier situation, as the Cougars offense was firing on all cylinders by that point in the match. The Cougars went on a 6-1 scoring run, with the Waves catching a break on a service error committed by sophomore libero Madi Allen.

Wong called a timeout when the score was 9-4, hoping to interrupt the Cougar’s offensive rhythm, but to no avail. The Waves could not string together consistent stops and could not find enough juice on the offensive end.

To conclude the fourth, BYU went on a 4-1 run and gained enough separation with the score at 20-11.

Eventually, an attack error from Ahrens and a kill by BYU junior setter Whitney Bower ended the set at 25-16.

“We’re definitely not our best,” Wong said. “Our team has been at a steady wave of energy and even [at] set one I thought we were really steady, and we just played a little better.”

The Waves look for redemption during their upcoming three-game road trip against Gonzaga on Oct. 21, Portland on Oct. 23 and LMU on Oct. 29.

For the Waves, these games are more than just a few regular season matches. Zelaya said the Waves are looking to bounce back by working harder during practice.

“The biggest thing for us is that we know it’s early in the season,” Zelaya said. “We’re going to get in the gym Monday and be ready to work on those changes to keep winning out the rest of the season.” 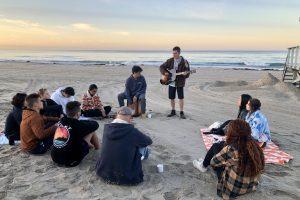 Pepperdine students meet by Tower 13 at Zuma Beach on Wednesday mornings for Surf Convo. Now that the gatherings have resumed,...
Copyright 2013 Jupiter Premium Magazine Theme
Back to top