There are a lot of fabulous female comedians that are currently smashing the stereotype that women can’t be funny. From Mindy Kaling to Lena Dunham, women in comedy are writing for television and film, creating their own shows and publishing best-selling books. They are releasing stand-up specials on Netflix and producing sitcoms.

Now more than ever, the realm of comedy is ruled by women, and the current queens are Tina Fey and Amy Poehler. In honor of the final season of Poehler’s hilarious sitcom “Parks and Recreation,” here are the six most exciting new projects helmed by women to look forward to in the near future:

There is always some trepidation that comes with rebooting a classic name like “Ghostbusters.” Dedicated fans worry that the new film will be a half-hearted imitation of the original at best. In this case, however, there is little need to worry.

The new film will star a quartet of extremely funny women: Kristen Wiig, Kate McKinnon, Leslie Jones and Melissa McCarthy. Wiig and McCarthy have already proven their ensemble comedy chops in the 2011 film that showed once and for all the merits of women in comedy, “Bridesmaids.” Joining them are two of the funniest current members of “Saturday Night Live.” Not only is the new “Ghostbusters” going to star a comedy dream team, it is going to be co-written by director Paul Feig and Katie Dippold, the team that wrote the Sandra Bullock and Melissa McCarthy buddy cop comedy “The Heat.” “Ghostbusters” is set to release in 2016, but it is worth the wait.

The wait is finally over. This is the first film starring both Tina Fey and Amy Poehler since 2008’s “Baby Mama.” Set to release Dec. 18, “Sisters” follows two full-grown sisters who decide to throw one last party at their parents’ house before it is sold.

Comedy all-stars Rachel Dratch, Maya Rudolph and Kate McKinnon are all part of the cast. Fans of “Saturday Night Live” will appreciate all of the familiar funny faces. “Sisters” writer Paula Pell also comes from “SNL” renown. With so many awesome comedians involved in the film, it is hard to believe it won’t be a hit. No matter what, it will be worth going to the theater to see Fey and Poehler expertly playing off of each other.

“Pitch Perfect” was an instant hit when it came out in 2012. It’s a movie musical with an attitude and a lot of humor. The appeal of the original comes from the soundtrack of laughs and catchy a cappella music, and the sequel promises the same.

Starring an ensemble cast of hilarious young women, “Pitch Perfect 2” will be a refreshing change from the usual summer blockbuster. The much-anticipated second installment is set to premiere May 15 of this year. Directed by Elizabeth Banks, who also portrays Gail in the films, “Pitch Perfect 2” stars all of the original Barden Bellas, including Anna Kendrick and the indomitable Rebel Wilson as Fat Amy. It’s about time to do some more horizontal running.

Veteran comedy actors Steve and Nancy Carell created this new TBS comedy. Steve Carell, best known as Michael Scott from “The Office,” has written before for “The Office” and “The 40-Year-Old Virgin.” “Angie Tribeca” is set to be released at some point later this year. It follows the story of an LAPD cop that has worked for 10 years in the Really Heinous Crimes Unit. Rashida Jones, best known for her roles as Karen Filippelli on “The Office” and Ann Perkins on “Parks and Recreation,” plays the title character. This satirical single-camera sitcom, armed with cast and crew from some of the best modern sitcoms, sounds like it has potential.

There are many comedic projects featuring women to be excited about throughout the upcoming year and into the next. 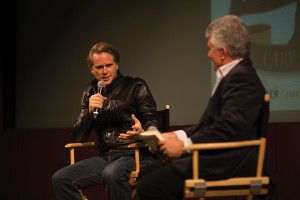 Photos by Matt BentonOn Saturday, family and friends gathered for a screening of the cult classic film, “The Princess...
Copyright 2013 Jupiter Premium Magazine Theme
Back to top