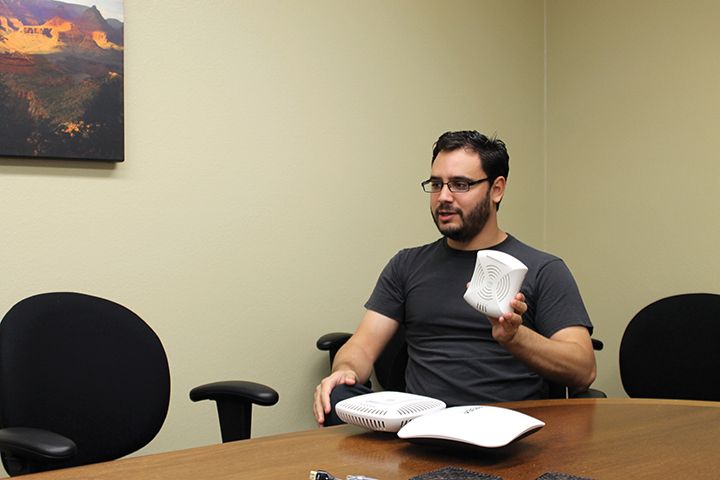 Pepperdine is engineering the next generation of Wi-Fi service, not only at the Malibu campus, but at its international campuses.

Pepperdine technicians are working on a project that focuses on connecting students and making information readily available about Pepperdine Wi-Fi services. Engineers are also focusing on improving Wi-Fi services in Rockwell Towers and the Switzerland  IP program during the next year.

Pepperdine Network Technician Ian Rowell discussed a variety of projects and plans which are in motion. “Currently with Wi-Fi we’re finishing up with several projects, most of which involve outside campuses, remote campuses like Encino, a new campus in International Programs going to Lausanne, Switzerland,” Rowell said.

One of the reasons the Wi-Fi experience is being improved is because wireless interference, also called channel interference, is a big challenge, according to Rowell.

The Switzerland upgrade initiative is still in the proposal phase and full funding has not been approved yet, according to Rowell.

Wireless access points (AP’s) operate on channels, similarly to a television or radio channel. They are also a block of frequencies that are used to transmit the data wirelessly through radio signals.

“What a lot of people don’t realize is that you can assign an AP to operate on a certain channel and an AP in the next room to operate on a different channel. That way their signals don’t interfere with each other and you eliminate what would be called the ‘channel cross-talk’,” Rowell said.

A better Wi-Fi experience can be attributed to plugging your computer into an Ethernet port, according to Rowell.

“For students, especially in the dorms, I just want to say, if you can, plug your computer in,” Rowell said. “Even if it’s a laptop, plug it into the wired network. There should be a working Ethernet port next to every desk and at least one in every living room.”

Sophomore Paul Wong, an accounting major and student worker in the IT administration office, said that the goal of the program is to connect students with better information about technology updates and Wi-Fi services.

Wong stressed the point that students should not be bringing or using personal Wi-Fi services.

“Right now, we are trying to promote better Wi-Fi usage on campus. Bringing and using personal Wi-Fi and wireless printers damages that connection, especially to neighbors and everyone else who is trying to connect to Pepperdine’s Wi-Fi service,” Wong said.

Rowell said Pepperdine has strict policies regarding Wi-Fi, and that wireless printers and Wi-Fi routers and repeaters are not approved for on-campus usage.

“These devices are not managed by the IT department and can cause significant interference to neighboring Wi-Fi access points if they use the same radio channels,” Rowell wrote in an email.

One of the major buildings that they will be working on in the fiscal year of 2015 is Rockwell Towers, which is a particularly bad area for wireless connection because the building was built before wired network standards were in place, according to Rowell.

Sophomore Morgan Matley is frustrated with the Wi-Fi connection in Towers. “I hate Towers Wi-Fi; it’s horrible,” she said. “It doesn’t work. My Netflix buffers all the time.” Matley said she knows the specific places in her room where she gets three bars of Wi-Fi, if that. “Walking up to Towers is like walking into oblivion.”

Wireless access points are currently dispersed throughout the building and look similar to fire alarms. Rockwell said the plan is to stop putting them in the hallways in Towers and bring them into the rooms, which will be a major summer renovation.

In Pepperdine’s International Program in Switzerland, the Information Technology technicians will be using a different AP, made by CISCO, called Meraki.

Rowell said Pepperdine will be going from a couple dozen wireless access points in Switzerland to possibly 50 of them.

Rowell plans to visit the program in Switzerland in December and January. “The idea is we’re going to be able to remotely support Switzerland’s entire network, wired and wireless, through the Internet without actually having to be there, and if we ever need to replace any piece of hardware, someone on the site can literally just swap it out, plug a new one on, and it will be already configured because it’s all stored in the cloud,” Rowell said.

Sophomore Samantha Shipley, who is studying abroad for the full year, said she is excited about the prospect of better Wi-Fi service abroad. “The Wi-Fi connection in Switzerland is poor and seems to get worse each day that we are here. Personally, my Wi-Fi has both good and bad days, but I know of people who cannot even access Internet as of this week,” Shipley said.

As for Wi-Fi design, Rowell said adding more AP’s is not a good solution due to interference updating from single-band to dual-band capable AP’s. Most computers sold now are dual band capable, which means more bandwidth, and therefore a better Wi-Fi experience.

“We get a lot of complaints about people at night … The university’s cut off cable service to the students, which means they’re using more and more web TV and Netflix viewing at night, and it saturates the wireless network,” Rowell said.