As you may know, Black History Month begins on Feb. 1. This month is usually filled with little-known facts about Black intellectuals, Black art as well as Black perspectives. There are always questions that come along too, such as “Why is there Black History Month? What about White History Month? We’ve learned about slavery and Martin Luther King Jr., isn’t that enough?” Let’s debunk these questions.

The origins of Black History Month stem from the efforts of Carter G. Woodson, Black alumnus of the University of Chicago and Harvard. According to the Association for the Study of African American Life and History, Woodson decided to develop a Negro History Week, a week of remembrance and recognition of other Black achievers. After several years, the official Black History Month began in 1976 after the social climate of the 1960s popularized Black recognition and Black history.

Having a White history month would be almost impossible, as most of our American history curriculum is basically White history. Because of this Eurocentric point of view, the stories of the people who helped build this country from the ground up (before you say anything: slavery) have been overlooked and nearly forgotten. Next time someone mentions White History Month, remember Pepperdine requires History of the American Peoples and Western Cultures I, II and III as general education courses, while African American Studies is taught as an elective.

Black history did not begin when our ancestors took that grueling passage to North America, nor did it end with the presidency of Barack Obama. There’s much more to Black people’s history than that — people such as Harlem Renaissance writer Langston Hughes, NAACP founder W. E. B. DuBois and feminist writer bell hooks are all proof of that. Just because they didn’t teach it in your textbooks doesn’t mean it didn’t happen.

Take some time this month to acknowledge all the overlooked Black history. Find credible resources that can explain the circumstances of the Black community today. You can begin by taking some time to understand the Black Lives Matter movement, or supporting a Black-owned business, or even go see “Hidden Figures.” Somehow, make an effort to understand the things Black people have done for the country and the advancement of all. 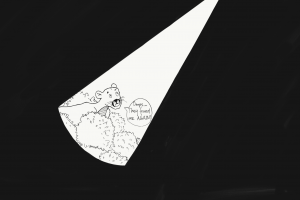 Art by Sybil ZhangPepperdine's four-day over-extended weekend has come and gone, and by now students and faculty have suffered...
Copyright 2018 Pepperdine Graphic
Back to top