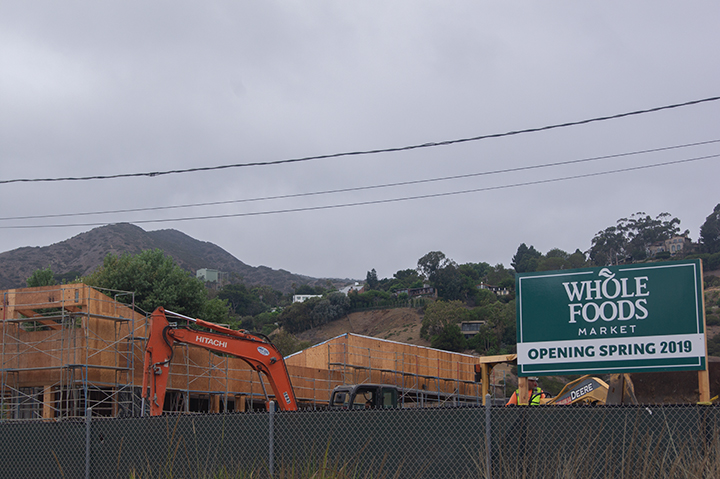 Whole Foods, “America’s healthiest grocery store,” is coming to Malibu with an estimated opening date of March 13, according to the Southern Pacific Region Whole Foods Market. Although Whole Foods will offer another option for groceries, it has taken nearly 12 years to get to this point.

Whole Foods is a major part of a larger development project called the Park at Cross Creek Shopping Center. The center will sit on the corner of Cross Creek Road and Civic Center Way.

Senior Bailey Jurik said she was excited for Whole Foods.

“I love Whole Foods,” Jurik said. “I’m sad that I won’t be able to experience it since I am a senior this year.”

Discussion of Whole Foods coming to the area began as early as 2006. However, construction started in Oct. 2017, following a battle over Measure R, according to The Malibu Times.

Measure R, also referred to “Your Malibu, Your Decision,” was an initiative that sought the preservation of the “unique oasis [Malibu] in the midst of urban and suburban sprawl and generic development,” according to the Los Angeles Times.

The measure’s mission statement closely resounds the mission and vision statements of the city. Mayor of Malibu Rick Mullin, summarized the city’s statements.

“The mission statement of the city and the vision statement centers around the preservation of the natural resources and memorializes the fact that what’s unique about the town is not … the stuff that man makes, it’s the natural world itself,” Mullin, a supporter of Measure R and a preservationist, said. “It is the mission of the city government itself and really it says the people of Malibu to try and preserve [the natural land] as much as possible.”

Measure R passed with a 59 percent vote in Nov. 2014, according to the Los Angeles Times. This meant Malibu residents could, through a city vote, determine the approval of proposed developments over 20,000 square feet, which targeted Whole Foods since its proposed size was 24,549 square feet.

The measure also required chains to sign a non-transferable conditional-use permit because of their identity as a chain and maxed the amount of space chains could take in a commercial center at 30 percent. Malibu voted down Measure W, the name given to the Park initiative, by a 57 percent vote Nov. 2015.

However, L.A. Supreme Court Justice James Chalfant ruled Measure R illegal on Dec. 15, 2015, based on the fact that Malibu surpassed its administrative powers through the measure’s provisions.

With the ruling, developers of the Park project began the process of construction.

The plan for the Park at Cross Creek involves 38,425 square feet of commercial space, according to The Malibu Times. Whole Foods will take up majority of the square footage and four other buildings will be included, as well as a courtyard with outdoor arrangements.

Mullin continued by saying that the city’s reaction is aimed toward the fact that more shopping centers are coming to the area even though there are vacant stores present throughout the city — some vacant for some time now.

“I think the perspective of a lot of the people who supported Measure R and defeated Measure W is that … [i]t’s just developers’ interests that are being served primarily, not necessarily the voters,” Mullin said.

Four grocery stores and many shopping centers exist in Malibu, begging the question, “Why do we need another one?” as posed by Mullin. Other shopping center developments are foreseen in the future, including more chains. One, originally known as La Paz Ranch, is going up next to the Whole Foods and will be larger than the Park center.

Employee Andrew Kennedy of Double RL & Co., a clothing store within the Malibu Country Mart, also said the additional shopping center didn’t make sense. Despite his opinion, he is excited for Whole Foods to come.

As for construction, Mullin proposed it was on-track after a conversation he shared with developer Steve Soboroff.

A major concern for the project involves the additional traffic that the center will bring to the Malibu Country Mart area. However, the environmental impact report, according to The Malibu Times in Feb. 2015, claimed that there would be no significant increase in traffic. This conclusion was made based on data taken in the area in July 2013.

Additionally, there will be two entrance-exit ways, the primary on Civic Center Way, across from the Country Mart’s driveway, and another on Cross Creek Road on the northern side of the project.

Developers are implementing necessary street accommodations, like street signs and crosswalks, within the parking lot to ensure proper traffic flow. Parallel parking spots will possibly be removed on Civic Center Way to ensure driver visibility for those leaving the Park Center.

Commenting on the construction of Whole Foods, Pepperdine students shared a mixture of feelings for the store.

Students said they recognize the quality of food and price difference of Whole Foods compared to other stores, such as Ralphs.

“It’s dope that there are more healthy resources placed in the area for college students,” freshman Eliahs Sumpter said. “I’ll definitely be going there more than Ralphs. It is pretty up there in price, but I’m paying for quality.”

Even alumna Kim Hughes of the Class of 1987 said she would have frequented a Whole Foods during her time at Pepperdine.

“When going to school, I would’ve shopped there [at Whole Foods],” Hughes said. “There was only one other option … Hughes Market. As a runner, it would’ve helped with eating well.”

“I love Ralphs,” Fest said. “There are more options with Whole Foods, but [Ralphs] is more affordable.”

For the most part, residents are excited for Whole Foods but what the Park center will bring to the community remains to be foreseen, Mullin said.

“Hopefully it will be an asset to the community that everybody likes and not a bunch of empty stores that haven’t been filled because there’s not enough,” Mullin said.