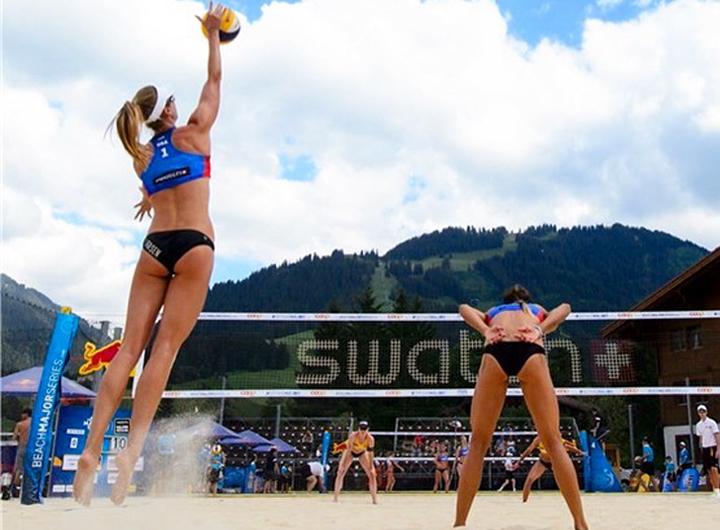 Beach volleyball player Kelley Larsen (left) serves the ball during a professional match in Switzerland. After a decorated career at Pepperdine, Larsen became a consistent performer on both the AVP and international pro circuits.

When Kelley Larsen arrived at Pepperdine as a student-athlete in 2010, she hoped, like many student–athletes, to achieve individual success and be able to lead her team to a national championship. As it tuns out, she did — just not in the sport she anticipated.

Originally an indoor volleyball recruit, Larsen joined Pepperdine’s Beach Volleyball program — then known as sand volleyball — in its inaugural season. After five years at Pepperdine and four years in the sand, she left Malibu as a two-time All-American, the program’s all-time winningest player, and an integral part of two AVCA National Championship winning teams in 2012 and 2014.

Professionally, Larsen has won six career events around the world, including three on the Association of Volleyball Professionals (AVP) tour. Along with current partner Emily Stockman, Larsen is ranked No. 11 on the AVP tour and No. 15 in the world, according to the Fédération Internationale de Volleyball (FIVB) rankings.

In the second installment of a “Where Are They Now?” series featuring former Pepperdine student–athletes, the Graphic caught up with Larsen, who said she is enjoying life as a newlywed and hoping to make a run at the Tokyo Olympics. The first installment covered Men’s Basketball all-time leading scorer Stacy Davis.

More than five years after leaving the school, Larsen said she has fond memories of her time at Pepperdine.

“I was so grateful to have spent that much time at Pepperdine,” Larsen said. “I absolutely loved Pepperdine, even outside of sports.”

As an indoor player, Larsen appeared in 16 matches with three starts as a freshman, but suffered a knee injury that forced her to redshirt her second season. That year, although not yet officially sanctioned as an NCAA championship sport, sand volleyball became a collegiate sponsored sport for the first time.

Pepperdine won the first American Volleyball Coaches Association (AVCA) National Championship in 2012 and won again in 2014, with Larsen and partner Kellie Woolever as the Waves No. 1 pairing. Larsen earned All-American honors on the sand in the 2014 and 2015 seasons.

Larsen achieved all of this success despite never playing beach volleyball until college.

“I loved it; it was new to me,” Larsen said. “I think my skills on the indoor side complemented my beach game a lot. I ended up sticking with beach, and [I’m] still playing.”

Larsen said she wasn’t planning on playing after college until the last semester of her fifth year, but that all changed when she tested the waters of an AVP tournament with her first partner, Betsy Flint.

At AVP Cincinnati, Larsen and Flint stormed through the field, defeating four of the top six seeds to win the tournament. At the time, their combined age of 46 years, 4 months and 27 days made them the youngest ever team to win an AVP title.

“It was at that point where I was like, ‘Maybe I’ll keep going and see where this volleyball takes me,'” Larsen said.

Larsen plays on both the AVP tour, which is in the U.S., and the international FIVB tour. Only the top four American teams qualify to take part in international competition, Larsen and her various partners have cracked the top four the past three seasons.

“It’s a completely different level on the world tour,” Larsen said. “You’re playing the best teams in the world.”

Another perk of qualifying for the world tour means the ability to travel to picturesque locations across the globe. Larsen said her favorite tour stop is Gstaad in Switzerland.

“You’re basically in the Swiss Alps; you’re in the mountains, and it’s just beautiful and breathtaking,” Larsen said. “It feels like you’re in a painting.”

The main goal of the international tour is to acquire points that are used to qualify for the Olympic Games. Larsen said qualifying for Tokyo in 2021 is “definitely the goal.”

Due to COVID-19, however, the Olympic qualifying process has been delayed.

“Obviously, this year was a little different, everything got canceled and the Olympics got postponed,” Larsen said. “But next year will be a big year if everything goes back to normal.”

The pandemic break has been significant for Larsen off the sand as well.

“I actually got married literally the weekend before everything shut down,” Larsen said. “So, I was lucky enough to not have my wedding be canceled or anything, so I was super grateful for that.”

Larsen is now married to fellow AVP tour pro Bill Kolinske. Starting with the upcoming season, Larsen will be known on the AVP tour as Kelley Kolinske, though the international world rankings still list her as Kelley Larsen.

Larsen has been playing with current partner Emily Stockman since 2018. Larsen said the partnership is extremely important in beach volleyball — a 2-on-2 sport.

“It’s like being in a relationship, and when you split up, it’s like going through a breakup,” Larsen said.

Larsen said that while volleyball chemistry is important, partnerships are also chosen with spending weeks at a time on the road together in mind.

“You spend so much time with this person,” Larsen said. “So, you want to find someone that would be a good fit for you on the court and personality-wise.”

While Larsen said she hopes to become more involved with the Pepperdine beach program, she still follows the team on social media and keeps in touch with Beach Volleyball Head Coach Marcio Sicoli, who was an assistant coach at Pepperdine when she played.

Even though she is busy with her new marriage and continuing pro career, Larsen is grateful for her time at Pepperdine. Larsen said that while in high school, her club coach advised her to go to a school she would still love if she got injured — advice that rang true once Larsen missed her sophomore year due to her knee surgery.

“Pepperdine, aside from the athletics, was such a good experience for me,” Larsen said. “I loved all the people there, the professors [and] the classes.”